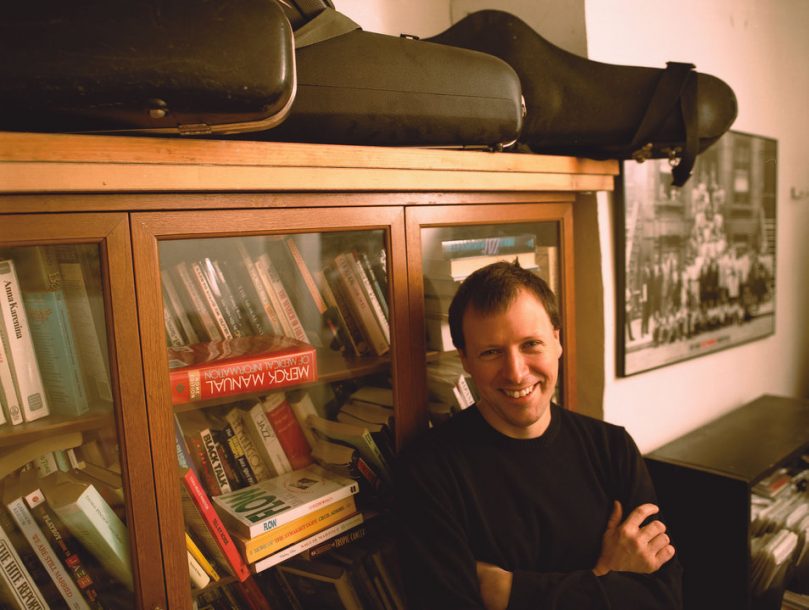 Saxophonist Chris Potter misses his girlfriend. As usual, he’s on the road, this time with Dave Douglas in support of the trumpeter’s new Bluebird disc, The Infinite. The group’s been on tour for a month and another Dave, the bassist Holland, has Potter on tap next for a few weeks in Europe. To his girlfriend, the idea of “Chris Potter at home” is probably laughable. “It would be nice to be home more,” Potter says. “It’s pretty rare that I get a chance to get into a routine and really settle down much before it’s time to go again.”

It’s Potter’s own fault: he let his saxophone get the best of him. Inspired by Miles Davis and Eddie Harris records lying around his childhood home in Columbia, S.C, a 10-year-old Potter began blowing sax lines; he made the jazzman’s move to New York City eight years later, after graduating high school. The late bopmeister Red Rodney took a shine to Potter and put him in his quintet. That began Potter’s professional career, which has seen him play with Paul Motian, John Patitucci, Marian McPartland and the Mingus Big Band, among others. It’s with the two Daves, however, that Potter racks up the frequent flyer miles. But who knows what Potter would use the friendly-sky benefits for. Only an uncharacteristic breakdown out of exhaustion and homesickness would have the reliable saxophonist flying back to his apartment on Manhattan’s Upper West Side in the middle of a tour.

The brief passages of time Potter does have in New York seem well spent. His friends, including his girl, are right in the neighborhood and eager to meet their globetrotting pal for a meal or a movie. Ritual morning walks add a bit of routine and clear his head for the day’s events. “If I’m at home, that’s how I like to start the day, especially if I’m going to work on music,” Potter says. “In New York there’s so much to see and it’s all packed tight. I go to the park, just walk around, see what the folks are up to, and then it seems I’m more able to get to work, whether it’s keeping up with business or making music.”

Luckily, the jazz racket Potter raises from his home studio meets the ears of sympathetic neighbors. “Oh, you’re the musician?!” they say while waiting for the elevator doors to open. After six years of living in his first-floor apartment, only one complaint has been charged-amazing considering New York attitudes and the studio’s inventory: Fender Rhodes, electric bass, saxophones and the ever-annoying drum set. Potter plays them all and assembles demos on a Korg digital multitracker. As a leader, Potter’s discography is 10 albums strong, with his latest, 2001’s Gratitude (Verve), being the first for a major label.

There isn’t much time to indulge in other hobbies, but Potter has found something creative he can do whether at home, on a plane or in a hotel. He likes to draw. “It’s basically an exercise in learning how to see,” he says. It’s also not disconnected, in his mind, from the music. “If you’re drawing the way I would, it’s all about the line. It’s literally making these lines that define a solid object, which also seems related to music to me. That’s all you have when you’re a saxophone player. You have this one line to establish the harmony and the rhythm, and I see that as an interesting parallel.”

Computing: “I just bought a laptop, a Mac G4. I’m hoping to learn how to use a music software program, so I downloaded the Sibelius demo. I hope it’ll make life easier to have everything in computer form.”

Reading: “I’m in the middle of this really long book, The Power Broker [by Robert A. Caro]. It’s about [NY municipal man] Robert Moses and details how he shaped New York and how he had a ridiculously profound affect on it. So many of the landmarks we see every day, he was involved. It goes behind the scenes and shows what the machinations were, how he was able to get things done, which were often not really very nice.”

Listening to: Chuck Berry’s Greatest Hits Volume 1. “I can imagine what it must have been like to have been young and heard that for the first time as something new; it’s exciting now.”

Eating: “I’m not much of a cook myself. I can make your standard omelet and a peanut-butter sandwich, so I’m often ordering out. I like Asian food a lot, and Mexican, but I find it’s hard to get good Mexican in New York. It’s an odd thing.”