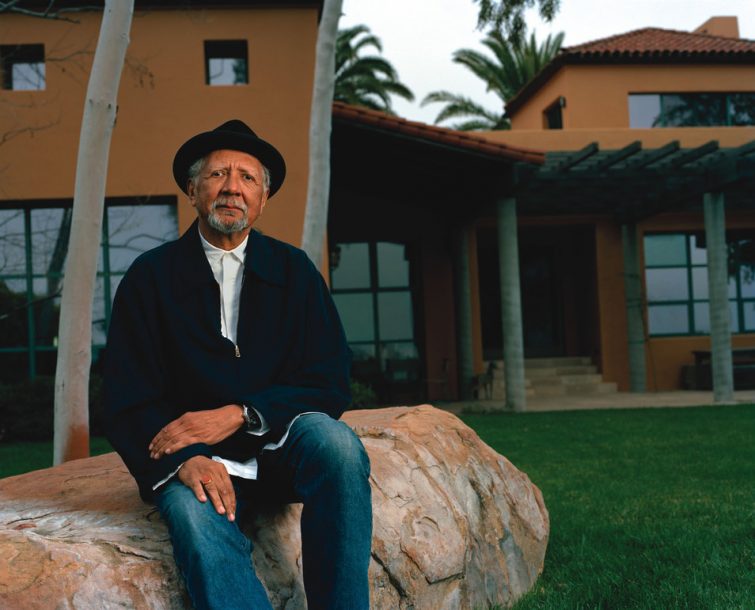 To find Charles Lloyd, the veteran saxophonist and survivor of the jazz wars, proceed 3,000 miles west of the jazz mecca of NYC, turn right at Los Angeles and proceed up into the affluent wooded Montecito, by Santa Barbara. There, in a rustic yet sprawling hilltop property, Lloyd and his wife/manager Dorothy Darr-who also designed the large, villa-like house-have lived a relatively quiet and charmed life off to the left of the typical jazz musician’s life (if there is such a thing). When Lloyd isn’t out touring the world, he returns to this house on the continental fringe with a panoramic, Pacific view-pacific in more ways than one.

A brief itinerary of Lloyd’s life and GPS coordinates: born in Memphis, he headed to Los Angeles to study at USC in the late ’50s and had early sideman gigs with Chico Hamilton and Cannonball Adderley, which brought him to New York City. There, he formed a quartet, featuring visionary youngsters Keith Jarrett and Jack DeJohnette, that became a million-selling cultural phenomenon, appealing to both jazz and rock audiences. After a few years in an increasingly hot spotlight, he jumped off the bus-or crashed and burned, depending on the source-and hightailed it back to California to “regroup,” in Malibu, Big Sur and, finally, Santa Barbara for the past 25 years.

Lloyd headed west at a time, in 1970, before other well-known jazzers followed suit. “I remember when I came back to California,” he says, “Herbie, Wayne, Miles, Zawinul, Horace-none of those cats were out here then. I remember everybody said I was doing a dumb thing coming back to California. I was up at [Bob] Dylan’s place in [Woodstock, N.Y.]. We were standing around and his manager, Albert Grossman, had a pool, with cracks in it, and Dylan said, ‘Man, why are you going out there?’ I said, ‘I gotta go back to heal a little bit. I went to college out there and I’m gonna go be by the sea and not wear any clothes and become a fruitarian.’ He said, ‘Man, that place will fall into the ocean.’ I said, ‘Yeah, so be it,'” he laughs.

Sitting in his kitchen, slowly ingesting an organic lunch, Lloyd welcomes the visiting journalist, commenting, “I’m just up here in my think tank. I’m trying to get this ship out to sea.” He’s referring to the latest release in his 19-year association with ECM Records, Rabo de Nube, the first with his new pianist, Jason Moran.

“I like to eat with wood,” says Lloyd, wielding a heavy-duty pair of chopsticks. “I don’t like to eat with metal utensils. I’ll do it if I’m out there and traveling. But when I left New York and came back to California, after I disbanded the group in ’69, I lived in Malibu. And I started eating with chopsticks. I also went into a serious detoxification thing.”

Lloyd and Darr spent much of the ’70s in Big Sur, in a humble Japanese country house that was Darr’s first architectural project. But the idyllic, inherently secluded haven of Big Sur had its drawbacks. “When Charles had a health crisis,” Darr comments, “when he nearly died in ’86, we realized that we needed to be closer to doctors. We actually were here when that happened. Had he been up there, he would not be here now. So that was how we shifted permanently down here.”

Speaking of Darr’s design for the house, built in 1998 on property they held since 1982, Lloyd says, “She has had architects want to come and see her house. These guys are supposed to be doing this for a living. She’s a renaissance woman.

“My grandfather’s property was in Mississippi. I grew up there, on his place. He had 1,600 acres, really beautiful land. Orchards for days. You could get lost there.

“After we lived in New York in lofts, I still want to live in a loft, you know? [Darr] lived in Florence. From Florence, she says, ‘OK, he needs a loft and I need the gentility of an Italian, Moorish house.’ We had this land and she built this space. The beautiful thing is that you don’t hear any sounds and you don’t have people bothering you. I think it helps me to aerate, to go for hikes in the mountains and go swimming in the water. All of that stuff is still important to me.”

In the large, high-ceilinged living room, one’s eye naturally falls on an historic original model of the Theremin-the model used by Miklos Rosza in the score for Alfred Hitchcock’s Spellbound, and used by Lloyd on his quirky ’70s album Moon Man. Next to that proudly sits a seven-foot Steinway B grand piano. It is, Lloyd explains, one of “the good ones that had the warm sound but that are modern instruments. This instrument belonged to a guy named Keith Hardesty, who was the master piano technician on the West Coast. It has accelerated action and it’s just so wonderfully built, and the sound is incredible. Michel [Petrucciani] has played it; Bobo [Stenson] has played it. Everybody has played it. Look how pristine it’s built and all. It’s pre-CBS.”

As we tour the downstairs area, now packed with electronic keyboards, a Baldwin studio piano and other sonic implements, Lloyd explains, “Dorothy was going to have a studio down here, with the booth in there.” He points to a room now housing tape archives going back to the 1960s. That in-house studio plan has stalled, but Lloyd’s house was the site of one renowned “home recording” so far: Which Way is East?, the two-disc duet between Lloyd and drummer Billy Higgins, made shortly before the drummer’s death in 2001.

Those recordings were made in the warmer environs of the living room upstairs, Lloyd says. “Higgins and I loved it upstairs, plus there was the fact that he was not so well.”

Of the house, Lloyd beams, “She made this full of light. When I was in New York, those guys who ran the music business, there was always talk about artists being downtrodden and living beneath the sewer. I didn’t think that was right. I thought that if a tree can’t get water in its roots, how’s it going to have wonderful blossoms and such?

“All of this is to say that the spaciousness of what happens when I can live in Dorothy’s world here is that I’m able to move all around and be on the outside and the edge. I can go exploring on tippy toes and then come back over here and get a bit of B-flat. It’s like a lot of different options. But the options will close down on your ass if there’s too much humidity and racism and too much B.S.,” he says, referring to life in Memphis.

“I don’t know how I got to be so blessed. I came around in the old days and it was a simpler time. When I lived in New York, my first apartment at 1 Sheridan Square was $98.75 a month. I was a composer and I had my publishing. They said it was ‘semi-professional. You have to qualify for this apartment.’ So I brought my royalty statements down. Different journey,” he says, shaking his head gently, “different journey.”

A tour of the house reveals an impressive collection of high-end speakers and audiophile equipment, a long-standing interest of Lloyd’s, nurtured by such sound gurus as Joe Harley from Audio Research. Scattered throughout the house are speakers made by Vandersteen, B&W, Tannoy, ADS, Krell and Snell, and turntables by Macintosh and Thoren. His audiophile passion began innocently enough, back in the day. “When I was in college,” says Lloyd, “these guys in the dorm would have these Heathkit things.” Fast forward to now, and Lloyd notes that Harley “hooks me up with these audiophile people and they make this equipment available to me. I’m on a pilgrimage.”

Sitting on his bedside table is a small pile of books, including beat poet Gary Snyder’s Back on the Fire and the late, great violinist Yehudi Menuhin’s Unfinished Journey: “He was a special guy. He had this universal love for music. I like the guys with the universal thing.”

Lloyd also recommends Indian Tales, by Jaime de Angulo: “It’s about the indigenous people who lived in our area in Big Sur, the Esalen tribe. Down here, it’s the Chumash, but up there, it’s the Esalen. Marvelous stories about them. And on our property, there grew this plant, this datura. It’s like a trumpet flower and a vine. It had medicinal purposes. They could brew a tea with it. It was a hallucinogen. They would have ceremonies up on this part of our land. I got the hit from it.”

Lloyd has explored Eastern spiritual paths for many years, and has settled on the Vedanta faith, which landed him in this corner of the planet. “I was drawn to this hill because of the Vedanta Temple [down the road]. Vedanta essentially teaches the harmony of all religions. They don’t have lines of demarcation.”