Skip to content
Become a member and get exclusive access to articles, live sessions and more!
Start Your Free Trial
Home > JT Archives > Cecil Payne: Bebop a Payne, a Cecil Do 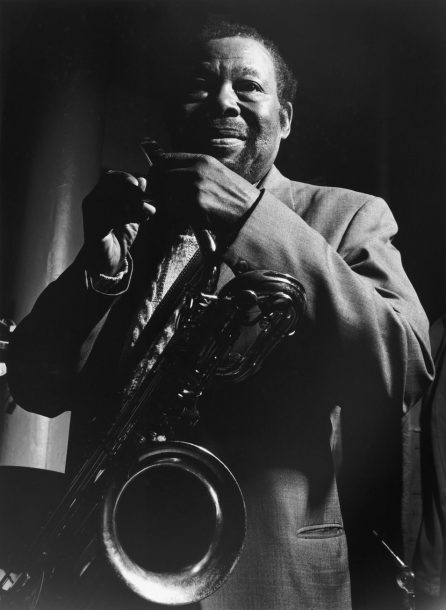 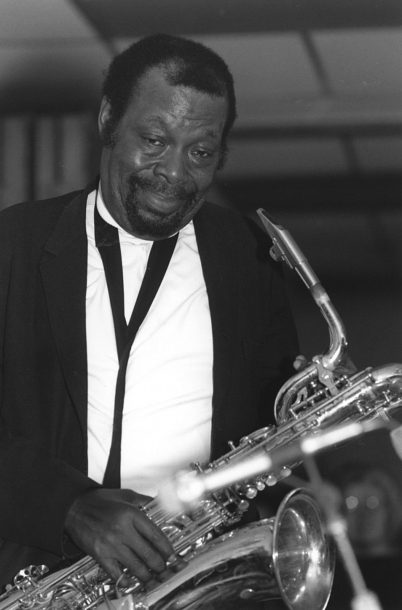 You need only phone Cecil Payne at his home near Camden, N.J., to understand precisely where he’s coming from musically. His answering machine reveals the answer in no uncertain terms: “Scoo-vlee-o-voo [pause] doo-bleep-da-blop-woo-oo. Payne’s window-comment allez-vous. Bebop!” Beep!

A dyed-in-the-wool rebopper from the old school, Payne played with Dizzy Gillespie’s big band in its heyday, from 1946 to 1949, appearing on virtually all of the group’s famous recordings for the Victor label. His nimble yet robust baritone sax work is prominently featured on “Ow!” (a Dizzy riff based on “I Got Rhythm”) and “Stay On It,” both from the same Aug. 22, 1947, session that also yielded Dizzy’s take on the Babs Gonzales bop anthem “Oop-Pop-A-Da” and John Lewis’ “Two Bass Hit.” Payne later performed on December 1947 sessions that produced such Dizzy classics as “Cubana Be/Cubana Bop” and “Manteca,” “Ool-Ya-Koo” and “Good Bait.”

More than 50 years after his participation in those seminal big-band sessions with Gillespie, the underrated and frequently overlooked bari player is still operating in a decidedly boppish vein. Although at age 78, Payne’s no longer imbibing in scotch ‘n’ milk, the preferred drink of Dizzy, Lester Young, Charlie Parker and all the bebop cats back in the day (as well as the title of his 1996 Delmark recording). “I can’t even drink a beer now,” he laments. “Bad for my blood pressure.”

While Payne may be considerably more fragile these days-he sits down while playing the heavy, unwieldy baritone sax and his vision has deteriorated dramatically after a long bout with glaucoma, to the point where he needs assistance on and off the stage-the Brooklyn native continues to blow with an inner spirit that transcends age itself. “My eyesight is gone but my chops are still there,” he maintains.

Cecil’s playing on his latest Delmark release, Chic Boom: Live at the Jazz Showcase, recorded last August, may be few steps behind the pace he set during his glory years with Dizzy or on such stellar offerings as a leader as his 1956 recording for Savoy, Patterns. But his heart and soul are still very much invested in this music, as his young sidemen Eric Alexander, Jim Rotondi, John Webber and Joe Farnsworth will readily testify.

“People think that because he’s older and he really can’t see so well that he can’t travel anymore,” says drummer Farnsworth. “So they don’t call him for gigs. For instance, I think it was really appalling that they would have these big celebrations for Dizzy Gillespie at the Blue Note [the New York nightclub] and not call him. I mean, how can you not call Cecil Payne for that. He was one of the original Dizzy Gillespie guys! And he’s playing spectacular now. Just because he’s not out hanging in the clubs anymore or that someone might have to carry him on stage-but you put the saxophone in his mouth and he’s tremendous.”

Payne is quick to credit his talented young sideman with keeping him vital and on the scene as he enters his seventh decade of performing. “It always feels like a challenge when I play with them,” he says of tenor titan Alexander and drummer Farnsworth, who have been with him since the early ’90s. “I better play or they’ll run me off the bandstand.”

Payne explains the title of Chic Boom on the CD’s spoken word intro: “The chic is the sock cymbal…chic-chic-chic. The boom is the bass drum. But the swing beat is in between that…chic-A-boom, chic-A-boom…like chic-a-go, chic-a-go.”

He elaborates in person: “If you’re going to stomp your foot, you have to lift it up first. That’s ‘and-one.’ When a conductor raises his hands to the orchestra, that’s the ‘and.’ And then he brings his hands down and the band hits. With jazz, it’s chic boom. That’s what jazz is. If you don’t hear chic boom, it’s just not a jazz beat. Improvisation is something else. What a soloist plays out of his horn is his own tune. If I take my horn and just start playing, that don’t mean I’m playing jazz. I could be playing a rumba or a tango or my mind could be on something else entirely. But as far as the listener is concerned, once he hears the drums playing that chic-a-boom, that’s what jazz is.”

“I went on the road with them, ” he recalls of that unlikely combination. Payne sat with all the other backup musicians on the less-than-fancy tour bus at first. “I worked with them for about two or three weeks, and one day they looked at me and said, ‘Are you Cecil Payne, the great bebop baritone player?’ When I told them yes, they put my horn on the bus and had me riding along with them in their Lincoln Continentals.

A product of Brooklyn’s Boys High, along with neighborhood pals Max Roach and Randy Weston, Payne started out playing light classical music on clarinet before switching to alto sax and gravitating toward jazz in the late ’30s. “Me and Max used to listen to records together all the time,” he recalls. “Randy was a little younger. His father owned a shop on Summit Avenue in Brooklyn and my father own a tailor shop on Summit Avenue, so knew each other from when we were kids-used to ride bicycles delivering clothes together. We were always friends, me, Max and Randy.”

It was Roach who got Payne on his first recording-a 1946 Savoy date for J.J. Johnson with also featured Roach on drums, Leonard Gaskin on bass and Bud Powell on piano-just after he got out of the Army. Cecil was still playing alto sax at that time and clearly emulating both Charlie Parker and Lester Young. He would switch to baritone sax later that year while playing in Roy Eldridge’s band. “I had already played baritone in a local Brooklyn band,” he recalls. “We used to play stock music-tunes like ‘Ain’t She Sweet.’ See, back then it was customary for the alto player to double on baritone so my father bought me a baritone. It cost him 45 dollars but that was a lot of money in those days. So when Roy Eldridge was looking for a baritone player so I told him, ‘Well, I have a baritone at home.’ He told me to bring it around to rehearsal the next day.”

Payne got the gig and ended up playing with Eldridge’s band on 52nd Street at the Spotlite club. Though it was a brief engagement, only two weeks, it proved to be a pivotal moment in his career. “On the last night, Dizzy came to see Roy,” he recalls. “He heard me play and asked me to come down to the Savoy the next week. And I’ve been playing baritone ever since then.”

After a fabulous three-year run with Gillespie’s landmark big band, Cecil left Dizzy in December 1949 and began working with Tadd Dameron’s 10-piece group, which recorded for Capitol that year. There followed a two-year run with Illinois Jacquet, from 1952 to 1954, during which time he played alongside fellow bari player Leo Parker. “Jacquet had to keep his eye on both of us,” he laughs. “But really, Jacquet was another mentor of mine as well as a great friend. We were like brothers.”

In 1957, Payne went to Europe for an extended engagement with Arthur Taylor. Upon returning to the States, he worked with childhood pal Randy Weston from 1958 to 1960, recording for Riverside during that time. Then in 1961 he replaced Jackie McLean in the Off-Broadway play The Connection, which featured a then-unknown young actor by the name of Martin Sheen. “He was a great actor, a real studious man-very intense,” recalls Payne. “He’d knock the scenery down half the time he was so realistic.”

In the mid-’60s, Payne actually dropped out of the music scene and went into the real-estate business for a period. “That was a rough time for beboppers,” he says. “There was no work. I couldn’t get a gig. If you said ‘bebop,’ you couldn’t work. So I got into real estate, but I discovered that I wasn’t a good salesman at all. I couldn’t sell anything.”

After that detour didn’t pan out, Payne hooked up with Machito’s band, where he played alongside another bari colleague and disciple, Ronnie Cuber. It was another fellow bari player, Joe Temperley, who got Payne into Woody Herman’s band for a yearlong hitch beginning in 1967. There followed brief stints with Slide Hampton and Maynard Ferguson before Payne landed his dream gig in 1970, playing bari in the Count Basie Orchestra. “I was originally just subbing for the regular baritone player who wanted to take off to be home with his family for Christmas,” he explains. “I was only supposed to be there for two weeks and they offered me good pay. But what they didn’t know is I would’ve worked for nothing just to play with Count Basie, because Basie is the reason why I started playing saxophone in the first place. After seeing Lester Young on the bandstand, that was it for me.” The two-week stay extended to six months when Basie’s original bari player sustained an injury that kept him out of the lineup through the first half of 1971.

Payne continued to persevere through the ’70s, ’80s and ’90s by sticking to his musical guns. Since signing with Delmark in 1992, he has released four albums that continue in that boppish tradition: 1993’s Cerupa, 1996’s Scotch and Milk, 1999’s Payne’s Window and now Chic Boom: Live at the Jazz Showcase.

“Nowadays, you say ‘bebop’ and people think that’s something old,” he grumbles. “And the younger musicians today, a lot of them only play the post-Coltrane style of saxophone. With me, I play what I been playing. I’m sticking with my own way.”

But while you can still hear the essence of his boyhood heroes like Pres and Bird in his playing, it’s clear that Cecil has also absorbed the modal lessons of Miles Davis and John Coltrane. Mastering the changes may be his life’s work, instilled in him by mentors like Dizzy Gillespie and Roy Eldridge, but this elder statesman of bop remains open to at least a few new tricks in his old age. “This guy doesn’t stop learning,” notes Farnsworth. “He’s still trying to forge ahead and he’s 78. That’s pretty amazing.”