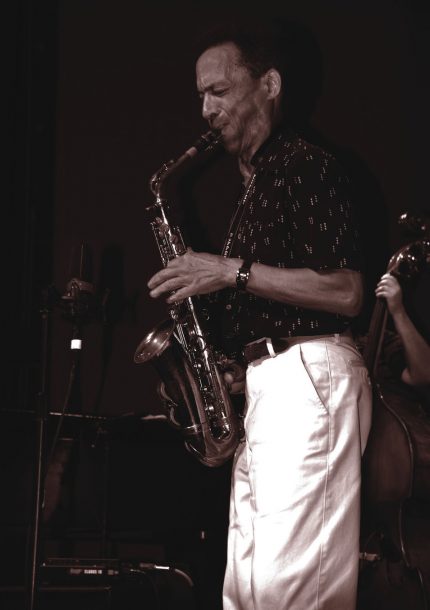 Alto saxophonist Vernice “Bunky” Green already had degrees from Northwestern University and Chicago State University in 1989, yet that’s when he chose to go back to school while in his mid-50s. To teach, that is.

That school was the University of North Florida in Jacksonville, which hired Green as a professor on the strength of his instructional prowess at Chicago State. He’d started his teaching career there in 1972, in the midst of what’s now a 48-year, 14-album solo recording catalog.

Professor Green, now 73, quickly ascended to his current position as director of jazz studies within UNF’s nationally heralded program. That, combined with his most recent stellar release, the Label Bleu recording Another Place (Green’s first in 17 years), disproves the notion of “those who can do; those who can’t teach.”

“I actually play more now than before I started teaching,” he says. “In a school environment like this, I’m constantly playing, and these kids move fast. I’ve made sure that I had enough piano chops to play tunes with my students, too. That’s important. I always have my students learning some basic piano. So they keep me on my toes, and I keep them on theirs.”

His learn-by-doing studiousness fits right into the music program at UNF. The school’s faculty includes touring artists like pianist Lynne Arriale and drummer Danny Gottlieb. “As director of jazz studies, I only teach students one at a time,” Green says. “I have my office here, sure, but don’t do a lot of administrative work, except for e-mails, which never let me rest. I do one-on-one teaching sessions with each student, so we get a chance to really get into it. In a class, you have to move at the speed of the entire class. If I have a student who’s bright and can surge ahead, there’s no speed limit.”

Born and raised in Milwaukee, Green was such a formidable autodidact that he could replicate Charlie Parker’s challenging solos while still in his teens. The underage saxophonist then bravely got his first onstage experience by sneaking into Milwaukee clubs to sit in. “I tell the kids that I’m a product of the street,” Green says, “and that I’m proud of that. I learned by trial and error. At 15, I could play everything that Bird ever recorded, verbatim. At 16, I had to paint on a fake mustache to get into clubs and play.”

The stage, he says, is where his real higher learning occurred. “My students know that playing here at school is not the real world,” Green says. “This is make-believe. They still have to learn to work and play together with other people in the moment, something that requires constant adjustment.”

Green moved to New York City in his late teens, and received a lesson both valuable and volatile when he replaced Jackie McLean for a stint in bassist Charles Mingus’ band in 1960. “Lou Donaldson told Mingus about me,” Green says, “Mingus was a disciplinarian, and very concerned about how you played his music. If you didn’t play it the way he wanted, he’d let you have it no matter where, even on the bandstand. At my audition, he told me, ‘This is your part, man,’ and played it on the piano. It was difficult, because the intervals were abstract, almost atonal. I said, ‘Do you have the music for this?’ He said, ‘Look, man, if I wrote it down, you’d never play it right!’ I understood what he meant; played it back to him, and he smiled.”

“I learned part of what my style is based on from Mingus,” Green continues. “Part of what I’m known for stylistically is based on his approach. He told me that there was no such thing as a wrong note. I realized that he was talking about tension and release, where there has to be some sort of clash before a release. My style is based around that. You can play almost any note along with chords, as long as there’s resolution.”

The Mingus lessons helped to prepare Green for an active playing/teaching career in Chicago, where he moved in 1960 and lived for nearly 30 years. “One of the first people who gave me an opportunity to play in Chicago was Joe Segal, who owned the Jazz Showcase,” he says. “I got to play there with people like Johnny Griffin and Eric Dolphy. The city was on fire, so I decided to move there. When it comes to music, it certainly isn’t the second city to New York.” Green’s reputation led to a session career that includes recordings with Elvin Jones, Clark Terry, Eddie Harris, Sonny Stitt and James Moody.

The teaching saxophonist and his wife of 40 years, Edith, still live in the same house they first moved into in Jacksonville. He says there was a culture shock upon arriving there. “You have the ocean, which is a nice diversion,” Green says. “But it certainly isn’t Chicago. Everything was at my fingertips there. My intention was to come down here for a year and check out the UNF jazz program. I figured I could never leave Chicago. But in between, something happened. I got some great students.”

Another Place, released in 2006, was Green’s first recording since his poignant 1989 album Healing the Pain, which commemorated the death of his parents. Saxophonist and disciple Steve Coleman lured Green back into the studio and produced the latest disc. Pianist Jason Moran, bassist Lonnie Plaxico and drummer Nasheet Waits aid Green’s close-to-the-edge urgency and soulful downshifts throughout. “Steve has taken stylistic saxophone things that I’ve helped create to his own logical conclusion,” Green says. “I wasn’t really hot on recording another album, ’cause I’ve been ripped off by so many record companies. But Steve said it wouldn’t be like that, and talked me into it. I’m glad, because it gave my career a jump-start.”

A new Green recording led to new international tour dates. Playing the JazzBaltica festival in Germany in the summer of 2007 inadvertently led to his next CD. “When I came over, I figured I’d be playing with people I knew,” he says. “But they paired me with some younger German players who are well known in that area, and they play with a free approach! They learned the music really well, but played free. I had to be flexible to function in that environment. But that performance was judged one of the best in Germany in 2007 by Jazzthetik magazine, and the organizers called me about releasing the concert on CD. I’ll be playing JazzBaltica again this July, then the North Sea Jazz festival, and by then the CD will be available on the German label Traumton Records.”

Still, Green is arguably better known as an educator than musician. He was president of the International Association for Jazz Education from 1990-1992, and was inducted into the IAJE Hall of Fame in 1999. During his 18 years at UNF, the school has risen in stature among national jazz institutions. “We have parents calling from Wisconsin and Michigan, and bringing their kids down here to audition,” Green says. “It’s a wonderful faculty; great people. We’re like a family. If we have a conflict, we talk about it, work it out and make things better.”

Green is even considering working on a follow-up instructional book to his Inside Outside, published by Jamey Aebersold Jazz in 1988. “That’s still selling after all these years,” he says. “About five years ago, Jamey said, ‘Why don’t you do another book?’ I have another one in me. Like Mozart, it’s already written-in my head! I won’t give the exact angle yet. I’ll just say that saxophone players play a certain way, generally. There’s another way to approach voicings on the instrument. I’ll come from that angle.”

The underrated, understated and rejuvenated Green laughs when the subject turns to an online community dedicated to him, the Society for the Promulgation of the Music of Bunky Green (SPMBG) on MySpace (http://groups.myspace.com/bunkygreen). Founded in Jersey City, N.J., in 2006, the site has more than 150 members and the subtitle “Bunky Green Kicks Ass!”

“Someone told me about that, but I haven’t seen it yet,” he says. “I bet that’s David Carey, a former student of mine who’s very dear to me and lives in that area. And he probably recruited some of my other students who’ve graduated through the years.”