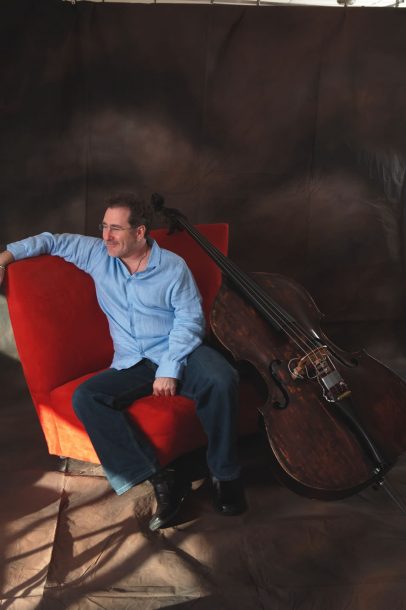 On Wood II, a sequel to his acoustic bass manifesto from 2002, Brian Bromberg again unleashes his commanding chops on a deep-toned, 300-year-old Italian Matteo Guersam upright. “I’ve had that same bass since I was 16,” says the former sideman to Stan Getz, Monty Alexander, Freddie Hubbard, Horace Silver, Gerry Mulligan and a host of other jazz greats. “It’s been a tremendous blessing in my life. There’s some real magic in that bass, and it’s sounding better now than ever.”

Wood II is Bromberg’s latest release on the Artistry label, which he co-owns. Accompanied by West Coast colleagues pianist Randy Waldman and drummer Vinnie Colaiuta, Bromberg displays his astounding facility on classic jazz fare like Cedar Walton’s “Bolivia,” Wayne Shorter’s “Witch Hunt,” Duke Ellington and Juan Tizol’s “Caravan” (cleverly rearranged as a New Orleans second-line groover complete with Pops Foster-style bass slapping) and the standard “I’ll Remember April,” which the trio takes at a ridiculously blazing tempo. As Bromberg notes of that all-out burner, “You gotta have one tune on the record where everybody can go nuts, and this was it.”

On a faithful reading of the Woody Herman Second Herd showstopper “Four Brothers,” Bromberg incredibly whistles the four harmony parts originally played by Stan Getz, Zoot Sims, Al Cohn and Serge Chaloff. “I overdubbed all four parts, and it was really fun to do,” he says. “I just whistled it down, and it was actually quite liberating to be able to hear and sing bebop lines and not be stuck to my instrument. It was the first time I was able to do something where I wasn’t playing the bass but I was still being melodic. When you play an instrument, there’s a separation between you and the music. When you’re singing, there’s no separation between you and the music, and it’s incredible to feel that.”

But it’s on four stunning solo bass pieces that the 45-year-old bassist and Tucson native reveals the full scope of his technical prowess. On a virtuosic reading of Kenny Dorham’s “Blue Bossa,” he nonchalantly unleashes a torrential downpour of rapid-fire triplets and dazzling 16th notes, finessed harmonics, left-handed hammer-ons and two-handed bossa nova comping on the neck and flamenco-style right-handed strumming while also slapping, tapping and rubbing the wooden body of his resonant instrument for percussive effect. His rendition of “Carry on Wayward Son” by the classic-rock band Kansas features some impressive use of chording, double stops and contrapuntal playing, and on Paul McCartney’s “Let ‘Em In” he sticks closer to the upbeat melody with strictly unadorned playing. “Paul’s writing is so brilliant, and this tune is so charming and has such a positive, beautiful vibe to it, that I really wanted to just honor the tune by playing it straight,” he says. “So there was no crazy playing or anything like that on this one.”

Bromberg does go “crazy” on an overdubbed bass trio version of Earth, Wind & Fire’s funk anthem “Shining Star.” As he explains, “I decided it would be fun to overdub the three basses so I could cop the different signature parts of the song. And it was really a bitch. Some of those things were really hard to play.”