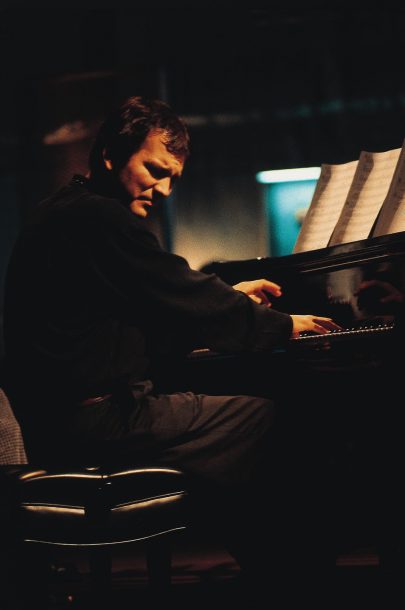 “I just hate it when I’m feeling bored on the bandstand, just marking time and going through the motions,” says Brad Mehldau. “That’s become less and less tolerable for me. Because I feel like, ‘What am I doing here? I could be sitting at home watching TV, I don’t want to just be sitting there taking up space.”

A restlessly creative nature compels the 28-year-old pianist to probe fearlessly into the music. And with Songs: The Art of the Trio, Volume Three , his fourth for Warner Bros., comes the sense that Mehldau is diving headlong into deeper waters. There is a greater degree of trust within the trio (Larry Grenadier on bass and Jorge Rossy on drums) and a stronger commitment to going out on a limb together. With Volume Three , which comes on the heels of a highly regarded live set from the Village Vanguard, they’ve hit their stride as a unit, breathing and moving as one and taking the music to some transcendent places in the process.

You can hear an incremental leap in the trio’s development from Volume One to the live at the Vanguard Volume Two as they spread their wings and fly on daring, stretched-out renditions of Cole Porter’s “It’s Alright With Me,” Jerome Kern’s “The Way You Look Tonight” and Mancini-Mercer’s “Moon River,” as well as highly charged interpretations of John Coltrane’s “Countdown” and Thelonious Monk’s “Monk’s Dream.” And they’ve taken it up yet another notch on Volume Three, applying their deconstructivist group mind to familiar standards like “Bewitched, Bothered And Bewildered,” “For All We Know” and “Young At Heart.”

“We rehearse very little because we’re basically either on the road or at home, and we all live in different places, so most of the working out gets done on the gig, sort of trial and error,” Mehldau explains. “And I tend to trust the evolution, so that if something doesn’t work one night I’ll stick with it and try it again the next night, whether it’s a rhythmic feel or a new tune or a new arrangement or something. Because it’s been my experience that things naturally progress and then they get better, but sometimes that takes a couple months.”

“Young At Heart” is a particularly good example of their chemistry in action. Opening on a rather innocent note with Brad playing whimsically along with a wind-up music box, the piece gradually dissolves into a tumultuous Dante’s Inferno section that demonstrates the artist’s interest in irony and paradox; something he waxed philosophically about at length in his liner notes to The Art Of The Trio, Volume Two.

“On the surface,” he explains, “something like ‘Young At Heart’ would have an innocent quality but the fun thing for me with those kind of tunes is to challenge the duality, to highlight a sense of irony or paradox within all that. The youthful, whimsical thing can be tinged with a feeling of regret or fear or age or sort of looking back on youth in the whole way you shape the tune and in what you suggest. That’s why it’s fun opening up and playing a free approach to it because you just have the melody and you can really create whatever you want. That’s a new type of approach we’re exploring where we’re playing the melody and then creating a texture that sort of builds up to a high point, not playing on the changes of the tune and not playing in any rhythmic feel but trying to base the improvisation off the melody.”

The music box at the beginning of “Young At Heart,” he explains, was actually a borrowed concept. “That was an idea I got from seeing a guy named John Bryan who performs here in LA…a singer-songwriter who does all sorts of crazy things like that within his performance. I saw him use music boxes and a whole bunch of other things to create this kind of soundscape. And then he went to the piano and on top of this whole thing he had created with music boxes and guitar feedback and lots of other stuff, he sang ‘When You Wish Upon A Star.’ It was exactly what I was talking about…there was this sense that ‘When You Wish Upon A Star’ took on this whole other darker level. That really blew me away.”

Mehldau’s ongoing interest in interpreting contemporary pop tunes-he covered the Beatles “Blackbird” on Volume One-is played out on Volume Three in his classically flavored reading of “Exit Music (For A Film)” by the British pop band Radiohead and his haunting take on Nick Drake’s melancholy “River Man.” He says he felt an instant kinship with the dark beauty of Drake’s tune while “Exit Music (For A Film)” appealed to his classical instincts.

“The first thing that attracts me to any tune, whether it’s a pop tune or a jazz standard or a ballad, is something about the harmony or the melody,” he says. “Usually it’s a simplicity in the melody and something that resonates harmonically with me. The harmony on that Radiohead tune is sort of classical. You get that with some Beatles tunes too. A lot of English bands are hip to that, not to make a generalization. But there’s a lot more harmonic depth going on in the British pop side of things. It’s an almost classical feeling of more thought-out specific voice leading within the guitar part.”

One of Mehldau’s technical signatures-an uncanny ability to switch hands, as it were, playing melodies in the left hand while layering on out-of-tempo counter rhythms in the right hand- emerges on his own “Unrequited.”

“It’s definitely one of those things that’s in progress,” he offers, “in the sense that it still feels like it’s not quite natural. I think that a lot of these things happen from playing on the gig night after night and then they start to develop where they become a natural thing that doesn’t feel like I’m willfully drawing on that, like ‘I’m gonna do this contrapuntal thing right now.’ And hopefully as I go along that will develop into a more natural thing that happens more spontaneously. Now it’s still something that with the left hand… I feel like I’m forcing myself into so I can find something else; sort of put it out there so I don’t get bored. And then of course the thing is to find out how do I relate this to the other guys. How do I not make it just me doing my little contrapuntal thing almost like an intellectual exercise while the other guys are standing around? How do I fit it into the texture of the trio?

“But it’s exciting because it just opens things up more,” he continues. “That’s why music like Bach, like the Preludes In Fugue…those things that have four melodies going on at the same time. I mean, when I study that music or listen to it I get this feeling that’s so great and sort of daunting at the same time. It’s an endless sort of infinite thing that you can never really get a hold on, being able to improvise even three melodies at the same time that are sort of coherent and not sort of fake it. That’s worlds away from where I’m at right now. For me, two is more than enough.”

Technicalities aside, Mehldau maintains an unquenchable thirst to explore the moment on the bandstand. All of his recent dealings with pop songs-whether it’s with his own trio or label mates Joshua Redman (Changing Times) and Mark Turner (In This World) or country icon Willie Nelson (Teatro, Island)-are underscored by the daring act of improvisation.

“You have to walk that fine line of allowing yourself to get into that liberated, open-minded relaxed state but also not be self-indulgent,” Mehldau maintains. “Because for me, when I’m an audience member I want to hear someone doing something that’s surprising me. And so often I’m disappointed when I go hear musician in whatever genre it’s in…classical, pop, jazz or whatever….because I feel like after five minutes, ‘I know what they’re going to do here. There’s not going to be any surprise.’ And so I want to hear that element of unexpectedness. I sort of wanna be blown off my feet. But what’s just as banal is hearing someone in some sort of masturbatory state whose just doing whatever the hell or not with no sense of whether the audience is enjoying it.”

Mehldau has certainly come a long way toward developing his own voice since his virginal tour in 1989 with alto saxophonist Christopher Holliday. “That was the first gig that I had where we went on the road. We went out for nine months and it was the first time that I was playing every night. And when I came off the road I remember musicians like [guitarist] Peter Bernstein and other musical peers saying, ‘It sounds like you found something that’s more you, sort of your own style.’ Because up until that point, the very broad two schools of influences were Wynton Kelly, sort of a hard bop approach that I just love and still do, and then more of a McCoy Tyner kind of thing.

“And I remember consciously thinking about it. I would think to myself when I was freelancing around New York, ‘Well, on this gig I did more of a McCoy thing and then on the next gig with Jimmy Cobb I did more of a Wynton Kelly thing. What’s going on here? Where am I in all this?’ And I think somehow after that gig with Chris Holliday I found a way of bringing those two things together and assimilating them and then starting to find myself in all of that.”

That ongoing journey of self-discovery has led him to Songs: The Art Of The Trio, Volume Three.

Mehldau has recorded all of his albums on a Steinway concert nine-foot D series. “Those are the ones that really do it for me,” he says.

Bob Dylan: Blood On The Tracks