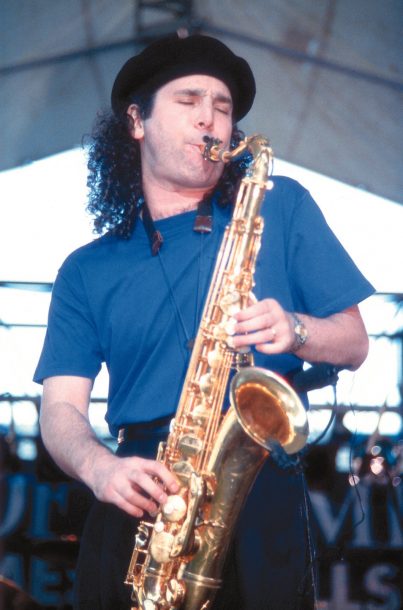 Saxophonist Boney James is on top of the hip heap these days.

A consistent leader in contemporary ratings. Heavy airplay of his first four albums on smooth-jazz stations. A hit across the nation, in the Philippines, Malaysia, Thailand, Japan and Singapore. A tour with Al Jarreau. And a new Warner Bros. CD, Sweet Thing, just added to the record bins.

So why is the NAC hitmeister feeling like the Rodney Dangerfield of modern music?

Because, James says, he senses “a cultural stigma” attached to contemporary jazz, a denigration he believes is cultivated by many jazz critics.

James muses, “I don’t know why jazz critics don’t like contemporary jazz. I think a lot of them feel that (straightahead jazz) has to be championed by them. And I think there’s resentment involved that the kind of music I’m playing will sell more, and has more radio play.

“There’s good and bad music in all genres. I would be the first one to admit that if you’re listening to some of the smooth-jazz radio stations, a lot of that music is boring. But not all of it is. And if I’m listening to a straight-ahead jazz station, not all of that is emotionally compelling either.

“If someone is critiquing the actual technique involved, that’s a whole other story. Mainly a lot of music critics have a tendency to just say they don’t like it,” he declares.

“It’s a cultural bigotry you sometimes encounter just because you’re playing for, essentially, a guy who doesn’t like Chinese food going to review a Chinese restaurant.

“I firmly ascribe to the concept that music is 100 percent subjective. If you’re hearing music and it sounds good and beautiful to you, then that makes it beautiful. It’s all within the listener. It’s not important for other people to tell you how they react.”

James, 35, has changed both his name and his musical tastes through the years. He grew up in Lowell, MA, as James Oppenheim, a student clarinetist who listened to Jethro Tull and Yes before shifting his ears to rock, R&B and then fusion.

He honed his chops playing in a series of R&B and funk garage bands, later playing fusion in the group Line One. He moved into studio and stage sessions, working with artists such as Randy Crawford, the Isley Brothers, Teena Marie and Bobby Caldwell.

The slim one’s odd nickname was created 11 years ago, while touring Scandinavia with Crawford in 1986-87. “It started with a joke. We spent a week in Oslo, Norway, a very expensive city. We were only getting $30 a day for food-and the beer was almost $10!

“So I was joking around and said to Wayne Lindsey, the keyboard player, ‘Oh, I just won’t eat for the next couple days.’

He said, ‘Shit, we’ll have to start calling you Boney James then. That’s going to be a good name for you, and I’m going to call you that from now on.’

“So he kept introducing me to people as Boney James, and over the years he and other musicians spread it around Los Angeles.

“When I was getting ready to put out my first album, the record company told me my name, James Oppenheim, wasn’t very marketable, and they’d heard of my nickname. It still took me a good two weeks to decide to use it. And all my writing credits on my albums are still my legal name.”

The Oppenheim family had moved to Los Angeles in 1975, his teen years when a favorite album was Stevie Wonder’s Innervisions. “And I used to drive around playing Earth, Wind and Fire’s Gratitude album. I had started playing saxophone, and a music teacher at school had a sampling of Grover Washington, Jr. playing ‘Mr. Magic.’

“Chick Corea’s fusion sound was my first entree to jazz, and when I heard Joe Farrell with him, I thought he was ‘the bomb.’ So I studied Grover, Joe and Gerry Niewood (of Mangione’s band), trying to sound like they did, not really thinking of a career in music. But all that stuff gets internalized into your identity.

“Touring with R&B bands, I was stylistically a combination of instrumental fusion with R&B influences-Grover, Ronnie Laws, The Crusaders. They all combined to make me sound a certain way, what I’m told is an identifiable voice.

“I think making music is removing the barriers from your inside and allowing that to come through your horn to the outside. I think I’m getting better and better at focusing on what it is I’m trying to convey when I’m playing. I think my style, playing-wise, is a little more direct, more identifiable, more communicative, more consistently me and less derivative.”

James was signed as a solo artist to the independent Spindletop Records label in 1991, releasing Trust the next year. In 1993 he moved into the majors with Warner Bros. Backbone was issued the following year, spending five weeks at the top of R&R’s NAC chart.

In 1995, Seduction rocketed James into major sales and airplay charts. It broke R&R’s previous NAC record with a run of 17 consecutive weeks in No. 1 place. On the Gavin Smooth Jazz and Vocals chart, it was on top 16 straight weeks. On Billboard’s Contemporary Jazz list, it remained in the Top Ten for an entire year.

Seduction also made history by placing four tracks from a single CD in the Top Five on national airplay charts. It gained a “Soul Train” nomination for Best Contemporary Jazz Album of the year. In 1996, James issued Boney’s Funky Christmas.

For Sweet Thing, the saxophonist composed one song and co-wrote seven others. Adding Jarreau’s vocals on “I Still Dream” was a collaboration that resulted in James touring with the singer.

Ideas for songs usually come to James while he’s riffling the keyboards or practicing his sax. “I’ll get a scrap of an idea, or a chord progression, and follow that seed of a song. The rest of it is just shaping it.

“The best quote about songwriting I ever heard, that I borrow to tell people, was from John Lennon, that it’s like a sculpture. You look at this block of stone and imagine that you can see some form within it, and you just keep chipping away until it is revealed.

“I’ll get a glimmer of an idea and the rest is just chipping away. It’s a long process, and most of my music undergoes many changes over the weeks or months that I’m writing. The songs change during touring, too, but the recording process always comes first.

“I also collaborate a lot with friends, like Darrell Smith, or Carl Burnett, or Paul Brown, my co-producer. Quite often it’s a jamming thing; we’ll just sort of hang, and come up with ideas, and if it’s something we like, we’ll hack away at it.”

The album features a Georgia O’Keefe-like photograph of a peach-half on the cover. “It’s so sunny and succulent and beautiful, it’s perfect to express the mood of the record,” says James.

“I’m always looking for a title to communicate something about the overall flavor of an album. And I like the covers to be symbolic-the naive quality of arms for the buoyant sound of Trust, the saxophone as a spine for the grittier edge of Backbone, a moth being drawn toward the light for the sexy sound of Seduction.”

James plans a year-long tour for the new album. “But I’m going to start writing again in September, between dates. I can’t write on the road, only at home. I go into my little hamster wheel, playing and going ‘Hmmm,’ then playing it live, which is really the greatest life.”

James says he’s been so busy recording and touring that he hasn’t listened to anything in recent months. His longtime favorites include: Pat Metheny, Pat Metheny Group; Rufus, Stompin’ at the Savoy.