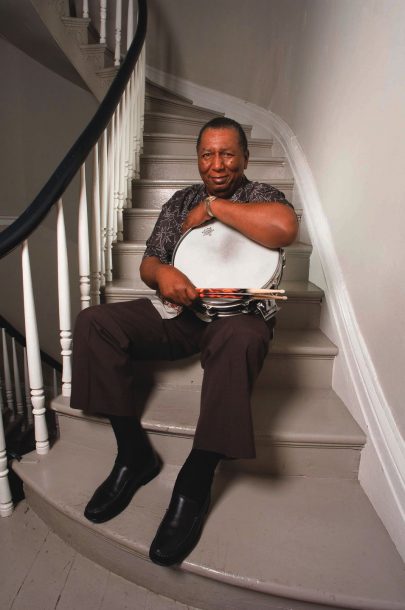 We freaked the engineer out,” drummer Bob French says of the hilarious scene created when a crew of New Orleans musicians descended on a New York studio for the recording of Marsalis Music Honors: Bob French. “He didn’t know what was going on. Then Branford [Marsalis] said, ‘This is the way we act at home. We’re just being ourselves.'”

French, who is a member of one of New Orleans’ great musical families that includes his father, banjoist-guitarist Papa French, along with five other Crescent City musicians, met up with saxophonist Marsalis and pianist Harry Connick Jr. for the date. The drummer has known both of the acclaimed musicians since they were children. He remembers when 7-year-old Connick would come to sit in with Papa French’s Original Tuxedo Jazz Band and uses Connick’s childhood nickname “Boomer” during “When the Saints Come Marching In.”

The drummer, who is also renowned as an oft-opinionated traditional jazz programmer for WWOZ radio, went to Grambling University with Branford’s mother, Dolores Marsalis, and lived next door to his father, pianist Ellis Marsalis. He recalls the times he’d visit when Branford would be outside shooting baskets while his brother Wynton was inside practicing the trumpet.

So it isn’t surprising that the session turned into an all-in-the-family kind of an affair with lots of jokes and hardcore ribbing. That playfulness can be detected in a very funny, country-ish take on “You Are My Sunshine” that is topped with French’s attempt at yodeling.

“Whenever you want to get a laugh, just play that,” French says, adding that it’s the only tune on which Connick sings-way in the back-because the CD is on Marsalis Music and his contract with Columbia Records limits him to instrumental work. “Basically we would talk about each others’ mamas for 15 minutes and then make a song,” Marsalis says of the good-time session. “We would finish cackling and then we’d start the tape and play so the music has that kind of spark to it.”

The familiarity of the musicians with each other and the CD’s all-traditional jazz repertoire made formal arrangements of tunes like the lively “Milenberg Joy” unnecessary. French gives Marsalis credit for some head arrangements. “He was the music honcho,” says French, adding, “Everybody can play, that made the difference.”

“Bob is one of the few traditionalists we have left,” Marsalis declares. “And he’s grouchy. I like grouchy traditionalists because they are less compelled to try to belong to a group-they’re going to fight for what they feel is right.”