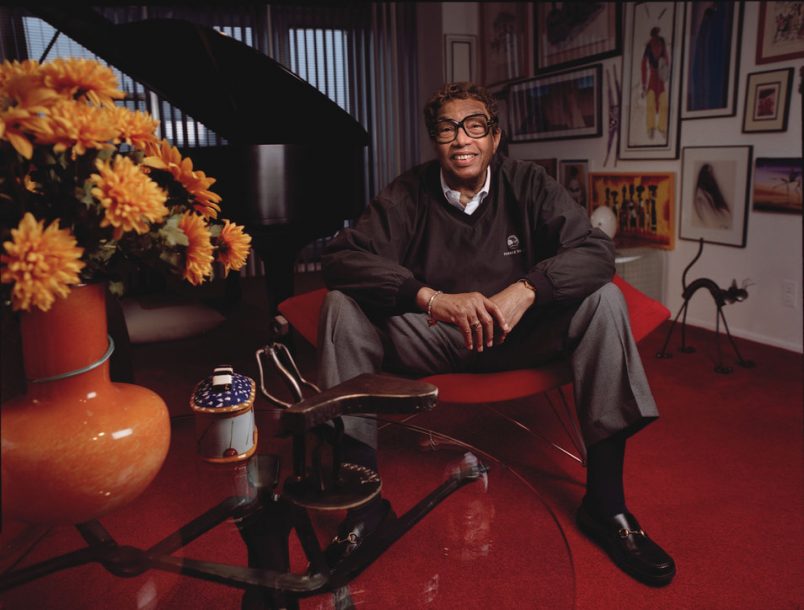 Upon entering Dr. Billy Taylor’s apartment, the first thing that meets the eye is the bright red wall-to-wall carpeting. If this seems to suggest VIP status, it should. Scanning the rooms that Dr. Taylor and his wife, Theodora, have called home for 35 years (in the Riverdale section of the Bronx), one sees photos of him shaking hands with at least four U.S. presidents. Perched on the walls among family portraits (Dr. Taylor has a daughter and a late son) are keys to a number of American cities. Next to the stereo sits a 1982 Emmy Award-a nice companion to the 1980 Peabody that hangs in the music room. Look over Dr. Taylor’s résumé and you’ll count more than 20 honorary doctorates. “I’m about to get another one,” he hastens to add, “in the place where I was born, Greenville, North Carolina, at East Carolina University.”

At 82, Dr. Taylor remains one of jazz’s premier pianists, educators and public figures, and he is returning to an active schedule after suffering a stroke last year. He is frustrated by memory loss but otherwise unfazed and acutely aware. “I didn’t rush back in. It was nice to have some time off,” he laughs. “I feel good.”

Dr. Taylor remains the Artistic Advisor for Kennedy Center Jazz in Washington, D.C. “I really hate to sit by and watch somebody and say, ‘They should have done…,” he says. “I try to do it myself if I think nobody’s doing it.” This season, Dr. Taylor is bringing the likes of Abbey Lincoln, Randy Weston, Martial Solal, Charles Lloyd and Ray Barretto to the Terrace Theater stage. But he is equally excited about the programming in the smaller KC Jazz Club. “Oddly enough,” he says, “Washington can’t hold onto clubs. We felt this was something we could add to the scene.” The club space will see performances in the coming year by Chris Potter, Bill Mays, Carla Cook, Joe Locke’s Storms/Nocturnes trio and the German drum ‘n’ bass unit noJazz, among others.

“The music is undergoing such an unusual turn,” Dr. Taylor muses. “Of all the years I’ve been playing, I’ve never seen anything like this, where the music itself is a throwaway. The people in charge don’t have any idea what music is about. It’s a commodity for them. That really bothers me, because it affects the audience, the availability, how the music is listened to and why. All that’s up for grabs now.”

He does see some talent out there still. “There’s a 16-year-old pianist I like very much, his name is Eldar Djangirov. I met him when he was 11, when he had just come over from Russia. I used him at the Kennedy Center on a couple of things. Lionel Hampton used him. He’s the kind of student you want to have because he’s serious about his music, he’s thoughtful about what he does and he’s a regular kid.”

For many years, Dr. Taylor has worked in the slender space where jazz meets American popular culture, endeavoring to bring jazz to the masses. After gaining broadcast experience on WLIB and WNEW radio, he became the musical director for the David Frost Show in the early 1970s. Roughly a decade later, he became an arts correspondent on Charles Kuralt’s CBS Sunday Morning program. All the while, he maintained his stature as an independent jazz artist. He continues to release albums on his own Soundpost label (formerly Taylor Made), championing the music that he calls “the custodian of our culture.”

Back from her shopping, Mrs. Taylor is quite surprised that her husband, whom she calls “Bill,” is posing for photos with their wire-sculpture cat. “You’re posing with Sophia?” she exclaims. “You’ve never liked Sophia! Maybe if she posed like this [mimics a cat scratching at a foe], that’d be more like it!”

“I’m the worst person to ask about equipment, but I have an Apple Macintosh and two Korg keyboards. I have a big band record that I composed almost completely on the Korg. It was fun. You can try all kinds of things-you don’t have to have the guys over.”

“My wife and I used to go all the time. But TV and movies have settled for the common denominator, and I’m just not interested in a lot of them. How many ways can you see somebody be murdered, and why?”

“I haven’t been reading as much as I was before I got sick. Right now there are so many things of interest to me, and I’m trying to keep abreast.” [Among the items on Dr. Taylor’s shelf are David Hajdu’s Lush Life, Paul Tingen’s Miles Beyond and Chuck D’s Fight the Power.]

“My wife is one of the world’s great cooks. My son-in-law is a fisherman and he takes my wife out fishing, so she can see what she’s cooking.”

“I can play from any of these [points to a Bang & Olufsen turntable, Technics CD changer and Revox reel-to-reel]. I still use the reel-to-reel because there are some things I don’t have anywhere else.”

“Well, I’ve traveled all over the world. My wife likes Paris. When we first got married we went on tour with Don Redman, in 1946. We went to eight countries in Europe, and we fell in love with several. We go back to Italy and France and Belgium. They’re very memorable to us.” [Redman’s was the first American band to travel to Europe in the aftermath of World War II. Dr. Taylor’s bandmates included Don Byas, Tyree Glenn and Quentin “Butter” Jackson.]