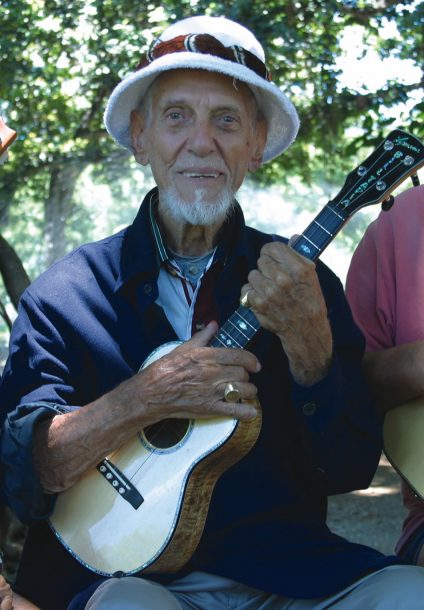 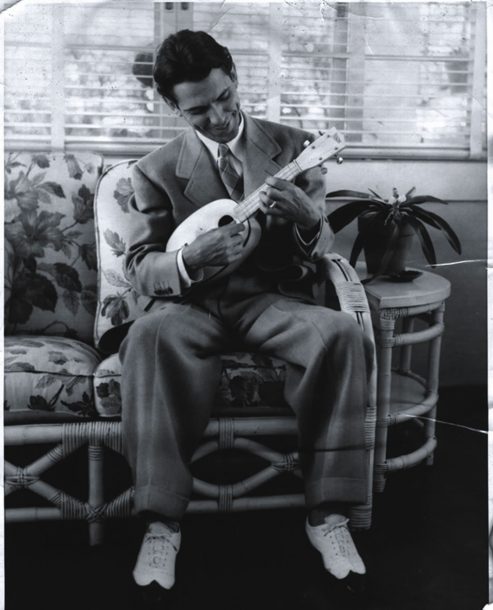 Bill Tapia may very well be the oldest active musician in the United States. Born in 1908 in Honolulu, Tapia remembers playing his ukulele for American doughboys heading off to fight in World War I. But what’s amazing about this 97-year-old isn’t so much his longevity as his resurgence-on the ukulele, an instrument he plays with uncommon grace and facility. It’s a late-blooming career that Tapia certainly didn’t expect, as he spent most of his life as a swing-loving guitarist.

By the early ’20s Tapia had figured out how to play pop and Hawaiian tunes on the uke in a lilting jazz style, but his love of swing soon led him to the banjo and guitar. It’s only in recent years that he returned to the ukulele, a move that has brought him more acclaim than ever before. “Everybody went crazy all over the country, crazy about ukulele,” Tapia says from his home Southern California, the pidgin twang of the islands still in his voice. “I’ve been playing concerts all over.”

His career includes stints with Bing Crosby and tenor saxophone stars Vido Musso and Charlie Barnet. He helped pioneer the Hawaiian swing sound back in the mid-1930s, as can be heard on an almost 70-year-old track included on his first album ever, 2004’s Tropical Swing (MoonRoom). His recently released follow-up, Duke of Uke, includes nine new tracks featuring Tapia accompanying his wistful vocals on deft jazz ukulele, and three ebullient examples of vintage Hawaiian swing recorded in a Honolulu music store in 1936.

While he gained a following on the islands in the 1920s, Tapia was drawn to the mainland after he started visiting California while performing on cruise ships that traveled from Hawaii to Los Angeles and San Francisco. He spent time working in Hollywood in the late 1930s and early ’40s, when he befriended the seminal electric guitarist Charlie Christian. “I picked up a lot of things and used to jam with Charlie when he was in the Benny Goodman Sextet,” Tapia says. “At that time, he was the top man. The first time I heard an electric guitar I thought it was out of this world. Every good jazz guitarist today picked up something from Charlie Christian.”

Tapia spent World War II in Hawaii, and after the war his desire to play in jazz big bands brought him back to the mainland. At first he was drawn to L.A. by his glowing memories of Hollywood, “but when I got there after the war, I didn’t like it at all,” he recalls. “Everything look-ed dirty. So I said, ‘I’m going to San Francisco.'” By 1952, he and his wife had settled in the East Bay. He worked mostly in San Francisco and Oakland, performing in house bands at top nightclubs while augmenting his income teaching guitar, banjo and uke. He would have been forgotten as a jazz journeyman if not for a series of unlikely events.

Indeed, launching a recording career as a nonagenarian was the last thing on Tapia’s mind, as he had decided to give up music when he moved from Northern California to Orange County in 1998. His wife was terminally ill and he had already lost his daughter, and after working as a guitarist for seven decades his pleasure in making music was gone. “When I lost my wife and daughter, I was gonna quit,” Tapia says. “Then I met a young girl. She wasn’t my sweetheart, but she took a liking to me and I treated her like one of my daughters. She told me don’t quit. Now I’m happy that I still can play.”

The story of how 26-year-old Alyssa Kauanakinilani Archambault, who hails from a family of Hawaiian musicians, inspired Tapia to return to music is explored in the compelling new one-hour documentary, To You Sweetheart, Aloha. The film captures Tapia at 94, as he’s starting to gain attention as a jazz original on the uke. It’s an irresistible portrait of the complex emotional relationship between the charismatic musician and Archambault, who starts working as his manager, arranging his increasingly well-attended performances. When the filmmakers found Tapia, they thought they were capturing the popular resurgence of a long forgotten artist.

“But the real story that emerged was of this man dealing with being 94 and some emotionally dramatic things happening in his life,” said San Francisco documentarian S. Leo Chiang, who codirected the film with Mercedes Coats. “With the release of his first album last year, that really catapulted him to the next level. Now we’re starting to get noticed, and it’s giving him much more attention, which he certainly loves. He eats it up.”