Skip to content
Become a member and get exclusive access to articles, live sessions and more!
Start Your Free Trial
Home > JT Archives > Bill McHenry: Inside Out 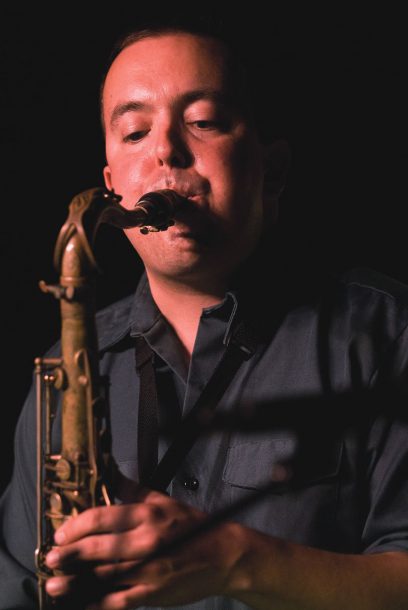 Bill McHenry’s range encompasses opposite polarities. On his own the tenor saxophonist is an unabashed free player, but he co-leads a quartet that sticks to standard but obscure songs and performs in a large band featuring exotic fare. McHenry attributes this versatility in part to practice. Unlike many musicians he relishes the endless repetition, the opportunity to refine his technique and fortify his musicality.

McHenry’s regimen, in some respects, resembles the daily grind of a student. Standing in the living room of his Brooklyn apartment, he blows a succession of long tones spanning the normal range of his well-worn Selmer Mark VI horn. He concentrates on the attack, sustain and release of each note. Next, he tackles an étude memorized from H. Klosé’s 25 Daily Exercises for Saxophone, a basic but essential text. Increasing the tempo of the metronome, he transposes the exercise first up a half step, and then down.

He will spend long stretches on tunes like “Cherokee” or “Sunnymoon for Two” before turning his attention to free improvisation. Because he devotes the better part of each day to music, McHenry has no reservations about the future. “I’m not a hoper. I don’t want to sit around and be like, ‘Oh, I hope this happens’ [or] ‘I hope that happens,'” said McHenry, who turns 36 in September. “I’m interested in what I have control over.

“And all those good things … that have happened to me all came out of me just working hard on music and committing myself to musical ideas. If I want more from it,” he continued, “all I have to do is put more into it. No way will I not be more successful practicing six to eight hours a day than I would practicing two hours a day. No way. Impossible.”

McHenry, who grew up in the coastal town of Blue Hill, Maine, attended Interlochen Arts Academy and the New England Conservatory of Music before moving to New York in 1992. Since his late teens, he has aspired to retrace the developmental arc of John Coltrane-from “Giant Steps” to Interstellar Space. McHenry’s fifth album, Roses (2007), and Rediscovery (2008), a joint release with trumpeter John McNeil, have a yin-and-yang relationship: the first relies entirely on a free approach; the second revisits the lesser-known repertoire of Gerry Mulligan, Russ Freeman and others.

McHenry and McNeil celebrated the release of Rediscovery (Sunnyside) in May at the Cornelia Street Café in Greenwich Village. During two sets, McHenry used the harmony of songs like Jack Montrose’s “A Dandy Line” and Freeman’s “Happy Little Sunbeam” as a landmark rather than an anchor. While the set list evoked the sunny ambience of 1950s West Coast jazz, McHenry imported saxophone technique uncharacteristic of this style. He embellished his solos with flutter tonguing, false fingerings and smears; on Wilbur Hardin’s “Wells Fargo,” McHenry’s lower register was by turns coarse and mellow.

“It’s not like he doesn’t want to play chord changes,” McNeil said after the gig. “He does and you hear him slip in and out of [the harmony]. He’ll play some stuff that’s just right down Broadway in terms of the voice-leading. … And then he’ll step outside the harmony and superimpose a new tonality over it.”

Roses (Sunnyside) is another story. The nine originals make few, if any, references to structure, and provide nothing more than a flash point for a group that includes guitarist Ben Monder, bassist Reid Anderson and drummer Paul Motian. The most accessible track, McHenry’s “African Song,” has a melody and a loose rhythmic pocket. But the dense, formless pieces comprising the bulk of the album bear only a slight connection to any tradition, jazz or otherwise.

“The further and deeper you go, the less the influences have an impact on [your music],” McHenry said. “I’m trying to get in tune with that. There’s a place that any of us have … where you listen to it and it goes past the point where some kind of style is relevant, where you really just feel it. I want to be able to tap into that … and find out what comes out of that.”

McHenry has a long association with Guillermo Klein, a pianist and composer from Buenos Aires, who leads Los Gauchos, an 11-piece band with a flair for songs and extended composition. McHenry appears on Klein’s new album, Filtros (Sunnyside); Klein also spotlights McHenry on a Third Stream work called “Solar Return Suite” from Solo Eclipse (Albany), the MIT Wind Ensemble’s recent album. McHenry has cameos in a recent independent feature film called The Visitor and on Norah Jones’ Not Too Late (2007). In addition, he works with Whoopie Pie, a wildly freeform rock trio whose debut album, Sweet (Veal), arrived last year.

McHenry’s approach remains fairly consistent in spite of the disparate music styles. “The stuff around me might be a lot different,” he said, “but the way I deal with melody and harmony is not going to be that different, whether it’s on a structure or not on a structure. It’s based around what kind of notes and what kind of ideas I think sound good. And the clearer [of a] conception you have of that, then the less effect a structure will have on you.”