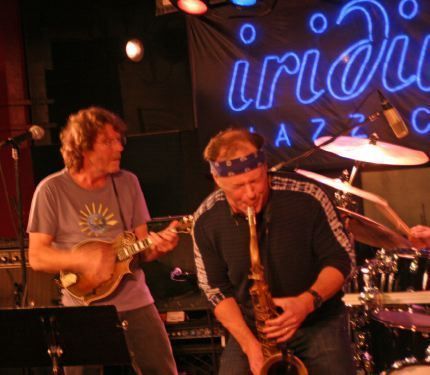 There seems to be a never-ending supply of bands these days concocting ambitious hybrids of hip-hop and jazz, South Indian Carnatic music and jazz, Balkan music and jazz, and klezmer music and jazz. But precious few have attempted to meld elements of bluegrass and jazz. Mandolinist David Grisman was a pioneer in this direction back in the ’70s with his brand of so-called “dawg” music, which offered buoyant, bluegrassy takes on Hot Club of France fare with plenty of stretching for fellow virtuosos like fiddlers Darol Anger and Mark O’Connor, guitarist Tony Rice and the occasional guest spot by Stephane Grappelli himself. Mandolinist Sam Bush pushed the envelope on exploring within the bluegrass tradition during the ’70s and ’80s with his groudbreaking New Grass Revival, a band that effectively named a new genre. Mandolinist Mike Marshall, an alumnus of Grisman’s Quartet, continued in this newgrass direction during the ’80s (his 1988 Rounder recording with violinist Darol Anger, The Duo, featured a take on Charlie Parker’s “Donna Lee”) and in the ’90s with his band Psychograss and also with the all-star group Strength in Numbers. In recent years, banjo virtuoso Béla Fleck, a former member of Bush’s New Grass Revival, has taken this hybrid idea to the jam-band scene as the leader of his popular band the Flecktones.

While these groups may have laid the groundwork for a marriage of mountain music and jazz, none have fused the two musics so forcefully and seamlessly as saxophonist Bill Evans has with his Soulgrass band. Grounded by the powerful yet remarkably flexible rhythm tandem of drummer Dennis Chambers and electric bassist Richard Bona, Evans’ latest edition of the group includes young Nashville-based banjo innovator Ryan Cavanaugh and the aforementioned Bush on mandolin, along with the exciting Christian Howes on violin. Together they delivered an invigorating, high-energy set that expertly incorporated intricate, blazing unison lines on the heads and improvisational abandon in the solo sections. And as tight as the arrangements were, there was still a looseness on the bandstand that allowed for a playful, organic shifting of rhythms, from funk to uptempo swing to reggae, strictly in the moment.

Cavanaugh’s advanced chordal voicings and arpeggios provided some intriguing harmonic textures behind Evans’ urgent tenor sax solos on “Soulgrass” and the funky “Celtic Junction,” the latter sounding like a hybrid of Black 47 and the Average White Band. Violinist Howes provided a seamless blend of bluegrass and bebop on “Soulgrass,” attacking the strings with powerhouse intensity. On “Celtic Junction” Howes revealed his flair for real-deal blues à la Stuff Smith. And when he stomped on his distortion pedal, he took his solo to Hendrixland.

Chambers, a human highlight reel as a soloist, was turned loose on a few occasions throughout the set, unleashing his uncanny chops and awesome technical proficiency in ways that he rarely gets to do on his regular longstanding gig with Carlos Santana. Every solo is a virtual clinic with this guy.

At one point in his solo on “Soulgrass,” mandolinist Bush started strumming the familiar theme to Weather Report’s “Birdland.” Bona instantly picked up on that motif by quoting Jaco’s signature bassline on that ’70s anthem. “Dance of the Leprachauns” (from Evans’ recent The Other Side of Something) carried a distinctive “Afro Blue” vibe and featured some nice blending on the frontline between Howes’ violin and Evans’ soprano sax. Cavanaugh and Bush engaged in some fiery trading of fours on this number, and the banjoist also revealed a novel use of Wes-styled octaves on his five-string instrument. Cavanaugh also turned in a blistering, distortion-laced banjo solo on Bush’s “Laps in Seven,” an audacious, chops-busting number that sounded closer in spirit to the Mahavishnu Orchestra than Bill Monroe’s Foggy Mountain Boys.

Chambers and Bona both left the stage for “Katie Hill,” an acoustic bluegrass breakdown featuring Evans, Cavanaugh, Bush and Howes. Evans also offered some clear, confident vocals on the rocking anthem “Ode to the Working Man.,” which included a wicked wah-wah-laced solo by Bush (on a mandolin-sized guitar) in which he quoted nimbly from Hendrix’s iconic “Voodoo Child (Slight Return).” They closed the set on a supercharged note with Howes’ barnburner “Slippery Bigs,” highlighted by an intense Elvin-Trane-styled breakdown between Chambers and Evans.

Decked out in his tie-dyed shirt and headband, Evans seemed tailor-made for the jam-band scene, which might be a perfect fit for this invigorating band of virtuosos.