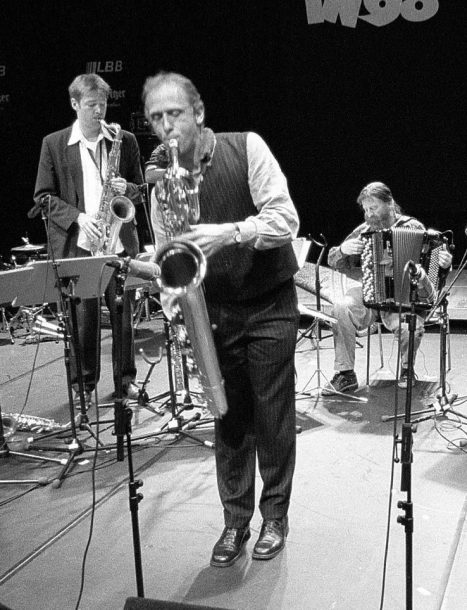 In an increasingly globalized music business that commodifies culture for mass consumption, it’s reassuring that Jazz em Agosto upholds its distinctive identity and high artistic standards. The annual avant music festival takes place over nine days in Lisbon at the Calouste Gulbenkian Foundation, which provides a beautiful setting for creative musicians and open-minded audiences to come together. The deep pockets of the Foundation make it possible to present uncompromising music without having to shill for corporate interests (no commercial announcements from the stage or tacky merchandising). The visionary programming of artistic director Rui Neves makes Jazz em Agosto a haven for international audiences with adventurous tastes, and the festival has such a good reputation among the locals that many attend the concerts regularly, whether they know the musicians or not.

Last year’s festival featured many of the modern musicians of Vancouver. This year’s concerts showcased groups from Portugal, Germany, UK, USA, France, Canada, Switzerland, Denmark and Norway, as well as a couple of cross-cultural collaborations. There were generally three concerts a day, all on the grounds of the Foundation; an afternoon show in an intimate 150-seat room, a 6:30 pm. concert in the grand auditorium, and the evening programs in a bucolic, outdoor amphitheater surrounded by lush vegetation with a duck pond behind the stage.

Just one year shy of their 40th anniversary, the Globe Unity Orchestra kicked off the festivities with an incendiary concert dedicated to trombonist and former colleague Albert Mangelsdorff, who died the week before. The raucous eleven-piece European free jazz super group mixed elements of knotty collective improvisation with chaotic clamor, occasionally tossing themes and motifs back and forth, permutated with scorching solos, tangled textures and long crescendos and diminuendos. The dual drumming of Paul Lytton and Paul Lovens fueled extended periods of sustained energy, with palpitating statements by saxophonists Evan Parker, Gerd Dudek and Ernst Ludwig Petrowsky. There were inspired declarations from trumpeter Manfred Schoof, bass clarinetist Rudi Mahall, the two trombonists Paul Rutherford and Johannes Bauer, and of course the leader and pianist Alexander von Schlippenbach, who played both the keys and inside his instrument.

While no other group matched the transcendent power of GUO, there were many other captivating sessions. Alexander von Schlippenbach revealed a modern jazz articulation while playing in an extraordinary, freewheeling trio with his GUO colleagues Evan Parker and Paul Lovens. Best moments found the saxophonist playing soft, split-toned chords and later a stratospheric soprano solo, while the drummer played pointillistically with the tips of his sticks.

The French duo of clarinetist Jean-Marc Foltz and bassist Bruno Chevillon have only played together for two years but they sounded comfortable and compatible in their poetic, instrumental conversations, making creative use of the space between notes. Though they played acoustically, some of the sonic effects had to be seen to be understood. Chevillon not only used fingers, hands and bows on his strings, but also clothespins, knitting needles and a scalp massager. In lesser hands some of these toys and tools might have been used as gimmicks, but Chevillon made it work. Their encore was tranquil and introspective, an exercise in musical meditation.

Sometimes a group’s instrumentation is as interesting as the music. Gebhard Ullman’s Ta Lam Zehn combined four bass clarinets, a B-flat clarinet, four saxophones and an accordion. Their kaleidoscopic outdoor performance was accompanied by a symphony of nearby frogs, making it irresistibly surreal. At the end of their set, just as Ullman finished plugging his CDs for sale, a duck quacked with perfect timing.

Some shows were more fun than profound. Fast ‘N Bulbous, a septet co-led by guitarist Gary Lucas and saxophonist Phillip Johnston, is a raucous, over-the-top tribute band dedicated to the music of Captain Beefhart. Their tongue-in-cheek introductions and the antics of the pig-tailed, lipstick-wearing bass guitarist with the jack-o-lantern shorts made it clear that though these are seriously talented musicians, they weren’t taking themselves too seriously. Another show that may have been unintentionally funny was local legend Jorge Lima Barreto’s solo piano recital. Barreto doesn’t read or write music, and in fact he barely knows how to play the piano in any conventional sense. The audacious artist trotted out nearly every avant cliché: preparing the strings, playing clusters, smashing the keyboard with his fists, even playing static on a short-wave radio next to his piano bench. The climax came when he played the piano with oven mitts. Hilarious.

Aside from that bit of comic relief, other highlights included the premier of a three-trumpet collaboration between Jean Luc Cappozzo, Axel Dörner and Herb Robertson. Each has developed highly personal sounds, employing advanced techniques and tonal resources, including growls, flutters, squirts and split tones. While the show went on a bit long for some, their opening piece was especially compelling.

Swiss pianist Irène Schweizer and drummer Pierre Favre have a long history together and they were all smiles for their 50-minute set. Since so much of the music in this festival was free and abstract, it was refreshing to hear these two actually play a couple of songs (by Don Cherry) with a somewhat recognizable beat. One particularly moving piece found Favre brushing a melody on the drums and Schweizer playing achingly beautiful, unresolved harmonies.

Mephista, featuring Sylvie Courvoisie (piano), Ikue Mori (electronics) and Susie Ibarra (drums), was another group that played with exquisite sensitivity in a set that combined lightening fast reflexes with the intertwining of intellect and imagination. Courvoisier utilized some of the same techniques as Jorge Lima Barreto, but in her hands they had purpose and the ideas had substance. She showed, for example, there are many ways to hit or pluck a string inside the piano, just as Ibarra demonstrated the many different ways to strike a cymbal. Courvoisier and Ibarra frequently exchanged glances and grins while Mori was transfixed, staring at her laptop screen.

Cellist Eric Friedlander performed a memorable afternoon solo set with dazzling virtuosity, though fortunately it was more about music than technique. He displayed his expressive vibrato on a piece from John Zorn’s Masada songbook, and took his time on a sublimely tender arrangement of Eric Dolphy’s “Serene,” letting the wide intervals resonate. His scraping, dissonant bowing on “Bungee” sounded like a rusted car being slowly pried apart by one of those junkyard jaws of life.

Performances by Jerry Granelli’s V16 Project and the Norwegian group Wibutee were relatively easy to resist. Better was the alluring Ensemble Raum, a Portuguese nonet led by the composer and guitarist Paulo D. Duarte, which performed his suite “The Seven Deadly Sins” with verve and elán. Better still was a deeply satisfying set by bassist Mark Dresser’s trio with pianist Denman Maroney and drummer Michael Sarin. Their telepathically swinging soundscape combined odd metered stomps, vivid splashes of color, abstract blues and thorny, challenging compositions, most notably their final piece dedicated to Yvonne Vera, the celebrated, recently deceased writer from Zimbabwe. It was a performance informed by joy and a sense of discovery that, like much of Jazz em Agosto and the city of Lisbon, left me wanting more.