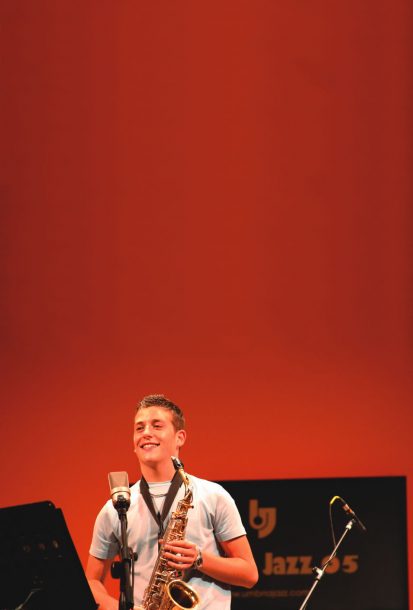 There’s hardly a better place to spend a summer week than in Perugia, Italy, at the Umbria Jazz Festival. The music was good, natch, but even better was the setting: a medieval hillside city with enough ancient nooks and crannies to make you think you were still walking around in Roman times (donning a soiled toga helped make the fantasy complete). Shows were held in cafes, restaurants and on the street, but also inside the dungeonlike walls of the Rocca Paolina (a partially ruined 16th-century papal fortress) and two stunning opera houses: Teatro Pavone (19th century) and Teatro Morlacchi (18th century).

I saw many hot shows at the Teatro Morlacchi-not just musically but also temperature-wise. This gorgeous, sweaty place is full of more hot air than a government official. One of the best shows at the Morlacchi was by Brad Mehldau’s new-ish trio, with longtime bassist Larry Grenadier and drummer Jeff Ballard in for Jorge Rossy. No one who saw this show could rely on facile Bill Evans comparisons to describe Mehldau; instead critics needed to create new facile comparisons, like this one I just made up: Imagine Oscar Peterson playing Thelonious Monk without the latter’s rhythmic choppiness but with full knowledge of his idiosyncratic harmonies and melodies. Mehldau spun knotty, extended right-hand lines with amazing precision and speed while his left-hand seemed to go just as fast in the opposite direction. It was strange, difficult, wonderous music.

Another Umbria highlight at the Morlacchi was hearing 16-year-old wunderkind Francesco Cafiso play the original arrangements from Charlie Parker With Strings. Frankly, it wasn’t an event I was really looking forward to: re-creating Bird not only seems like a thankless task but a fruitless one. How wrong I was.

Cafiso is a spectacular musician. Even the string players, all professional classical musicians, were smiling like fanboys and girls at the apple-cheeked kid who ripped out some of the most fluid alto-sax solos I’ve ever heard. His glissandos are pure grease, and his tone is so sweet, full and gentle that even when he projects some grit into his playing his sound becomes textured, not coarse. I understand why the Italian jazz cognoscenti, from Umbria head Carlo Pagnotta to writer-producer Enzo Capua (who organized the Bird-with-strings concert), are banking on this kid to spread the country’s jazz scene far and wide.

Regardless of his age, Cafiso’s style sounds fully shaped now-albeit in a musical form that is about 60 years old. In fact, a few nights later at the Rocca Paolina I saw him wipe the stage with Harry Allen and Scott Hamilton-no slouches in the modern-day swing-and-bebop scene. Cafiso’s stunning skills are a welcome smack in the head to the age-obsessed world of jazz, where players and writers “rank” musicians by age and experience rather than on ability alone.

Dr. Lonnie Smith had an incredibly potent group with him-guitarist Mark Whitfield, the monster drummer Winard Harper and James Brown’s main man on the trombone, Fred Wesley-and I saw this band absolutely kill on the last day at the Teatro Pavone. In fact, it looked like Smith was actually dying on stage at one point. During the third song, “Your Momma’s Got a Complex,” Smith, always a showman, crawled under his B3 to play the foot pedals with his hands; the problem was that he wasn’t coming back up. A look of concern spread across Whitfield’s face, and Wesley was straining to look behind the organ and set what’s doing. Only Harper, who presumably had a fine view of Smith struggling to hoist himself back up onto the bench, knew that the good Doctor was just fine. “I used to do that when I was young. Whew, I haven’t done that for a while,” Smith said when he was safely behind the keys again. From now on, stay on the bench Dr. Lonnie. But someone please record this group-a compilation CD culled from live performances would be ideal-because it’s one of the finest ensembles that Smith has played with since his days with George Benson in the 1960s.

Trumpeter Enrico Rava’s quintet, along with Cafiso, played a fantastic late-afternoon show at the Teatro Morlacchi, and it was interesting to hear Tha Kid in a non-bop context. He still sounded good, but you could tell he wasn’t entirely comfortable playing in a freer setting. During “Sand,” Cafiso and the fantastic trombonist Gianluca Petrella engaged in an alto-‘bone duel that all but announced that they are the next generation of great Italian jazz musicians-and they couldn’t have a better mentor in Rava, the grizzled trumpeter with a classically romantic tone and an experimentalist bent. Rava and Petrella had a thrilling shootout during “The Trial,” with the trombonist using electronics to great effect.

I was disappointed that I missed a much-buzzed about performance by Petrella’s quintet the day before; such are the riches of Umbria Jazz. But I did get to catch a performance by Rava’s former pianist Stefano Bollani-who lived up to his reputation as the Chico Marx of the 88s. Super-smart music was paired with super-silly slapstick, and somehow Bollani made it all work without the performance coming off like shtick.

Lizz Wright held court for several performances at Teatro Pavone, and I’m happy I caught one of them. I didn’t have high expectations when I walked into the venue, but I found myself surprisingly transfixed by Wright’s powerful, husky voice-and the tight band backing her-on a sensuous set of dusty originals and reworked folk-pop tunes like Neil Young’s “Old Man.” Why no Norah-type love for Lizz? She would kill at Starbucks (and I mean that as a compliment).

The Mingus Big Band pretty much set the Teatro Morlacchi on fire during its lone performance, with a standout moment being its beautiful take on “Goodbye Porkpie Hat,” which featured a dazzling, supremely confident opening solo by tenor saxophonist Wayne Escoffery. Goose-bump time.

New Orleans represented throughout Umbria, in various aggregations and venues, but its spirit was led by the Algiers Brass Band’s daily march down medieval Perugia’s main drag at noon and 6 p.m. to kick off the day and evening festivities.

Joe Lovano and Hank Jones doing the do that they do so well. It’s hard not to fall in love with anything that Jones plays.

Italian pianist Dado Moroni is about 12 feet tall but the music he made at the Teatro Morlacchi with his trio was compact and intimate. He blended a variety of lovely mainstream piano styles into an appealing performance.

The crowd loved the gig by Richard Galliano’s New York Trio at the Teatro Morlacchi. While the appeal of the accordion escapes me in all but the most Irish of folk music, there’s no denying that France’s Galliano is a wiz on the squeezebox.

The largest stage at Umbria is the Arena Santa Giuliana, an athletic field turned concert grounds. Outside of Cassandra Wilson, Terence Blanchard, and the Great Salsa All Stars Night, most of the music presented there was geared toward bringing in the pop crowd-which I’m down with. Crazy Diana Ross was hella fun, but how many sequined-costume changes does this woman need? The legendary Niles Rodgers and Chic, whose music I love, proved once and for all that disco does not suck-but it sure can be corny. Unfortunately, little of the rest of the music presented in the Arena was worth more than a passing nod, including Soft Machine (these pasty prog-rockers opened for funky-as-hell Chic?), Al Jarreau, George Benson, the Commodores, Ricky Fante, Craig David and Delmar Brown (maybe the worst concert in all of Umbria, ever). Elton John did his thing with no zing, and Tony Bennett and the Count Basie Orchestra played a professional set of truncated hits; sweet mostly because the Italian crowd loves Antonio Dominic Benedetto and he loves them back. The saddest sight was seeing an ailing Oscar Peterson having to be helped to and from his piano bench. Peterson was able to play fine with his right hand, but since his stroke a few years ago his left hand is limited to the occasional bass-key plonk. But at least Peterson sold out the place, which is more than can be said for most of the other acts at Arena Santa Giuliana (including Bennett).

Madeleine Peyroux looked and sounded like she wanted to be someplace else than the Teatro Morlacchi. I know I did. She did one bland tune after another, all taken at a tempo slower than a pendulum’s swing on a grandfather clock.

McCoy Tyner’s All Stars Band at the Teatro Morlacchi was so bland, so vamp-solo-vamp oriented, that it didn’t take me long to high-tail it out of there.

While Mehldau’s trio performance was something to behold, his solo-piano gig at the Teatro Morlacchi eight days prior was diffuse and insular. But audiences love Mehldau in Umbria; he’s practically an adopted son.

Brazilian smooth-funk-jazz keyboardist Eumir Deodato played what seemed like 47 shows at the Teatro Pavone; I had the displeasure of catching one of them. A total time warp to 1970s cheese.

Groundtruther, with drummer Bobby Previte, guitarist Charlie Hunter and alto saxophonist Greg Osby, was just a mess of noise and electronic effects. A surprisingly ugly show from a gathering of great musicians.