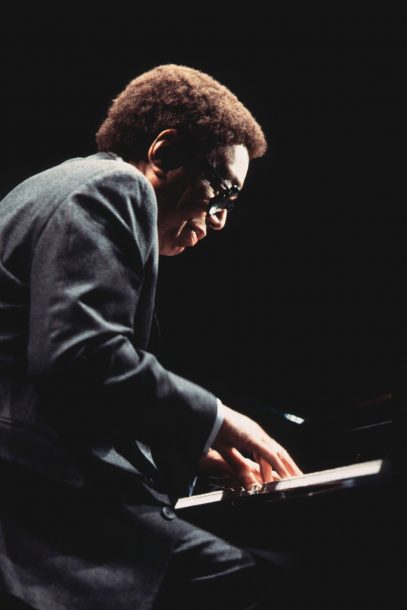 If Dr. Billy Taylor had merely played piano for the past six decades, he would have secured an honored place in the jazz history books for his skills and creativity. But Taylor has accomplished a great deal more during a distinguished career as composer, recording artist, scholar, educator, author, radio and television host and, above all, as a tireless advocate and spokesman for jazz.

Under his watch, the John F. Kennedy Center for the Performing Arts has become a major jazz presenter in the nation’s capital, so it was fitting that the 83-year-old Taylor chose to give his final public performance here.

Having grown up in D.C., Taylor has strong roots in the area and he was given a hero’s welcome from a sold-out, enthusiastic audience. Taylor entered from stage left wearing his trademark big eyeglasses and looking far younger than his years. He acknowledged the standing ovation with a big grin and got right to work playing his jaunty, Latin-light waltz “C-A-G,” backed by his compatible rhythm mates, bassist Chip Jackson and drummer Winard Harper.

Like Taylor, Jackson and Harper were all smiles all night long, showing the audience how much fun they have playing together. It’s the first time I’d heard Taylor since his stroke in 2001, and I was surprised and inspired by how strong he still sounds, with barely any sign of impaired facility. He can still unfurl those elegant right hand ornaments and swinging turn-arounds, as he did on the attractive melody “If You Really Are Concerned, Then Show It.” Later, as they played the “Third Movement” from Taylor’s Suite for Jazz Piano, the pianist began with a lovely rhapsodic intro, then picked up steam while segueing to a bright, sunny tempo. At one point Taylor played a delicately intricate, damn near impossible cadenza for solo left hand that left pianists in the room shaking their heads.

Taylor modestly explained that the evening’s concert was to honor Dizzy Gillespie, and to that end they brought out the appropriately formidable trumpeter and guest soloist Jon Faddis. Their first piece together, Taylor’s lilting bossa nova tribute “Diz,” was lively and conversational, as the various players caught and then responded to each other’s musical statements. The conversation then turned verbal as Taylor chatted with Faddis, who told stories about first meeting Gillespie at age 12, and how that eventually inspired him to become a musician. Taylor then related how Gillespie used to teach him chords and voicings while playing at the Onyx Club on 52nd Street during the heyday of bebop. These reminiscences were a fascinating reminder that jazz is still, by and large, an oral tradition where essential lessons are passed along from musician to musician. One of Taylor’s greatest contributions has always been that he opened the door to that secret, musicians-only world and taught audiences what the music is really about.

The lessons continued as they played Gillespie’s “Night in Tunisia,” with Faddis taking the dazzling, virtuosic break, followed by a hip version of “Con Alma,” with Jackson nimbly dancing on the strings and Taylor inserting a quote from Charlie Parker’s “Cool Blues.” Taylor and Faddis talked some more about Gillespie’s use of Latin rhythms, which led to a spirited “Manteca,” featuring Harper playing polyrhythms with hands and feet, and Taylor laying down some soulful montunos with Faddis soaring above.

After another standing ovation, Taylor and friends came back for one last piece: a deeply moving, take-your-time arrangement of “Take the ‘A’ Train.” Like the illustrious performing career of this iconic pianist and musical renaissance man, we wished it would go on forever.