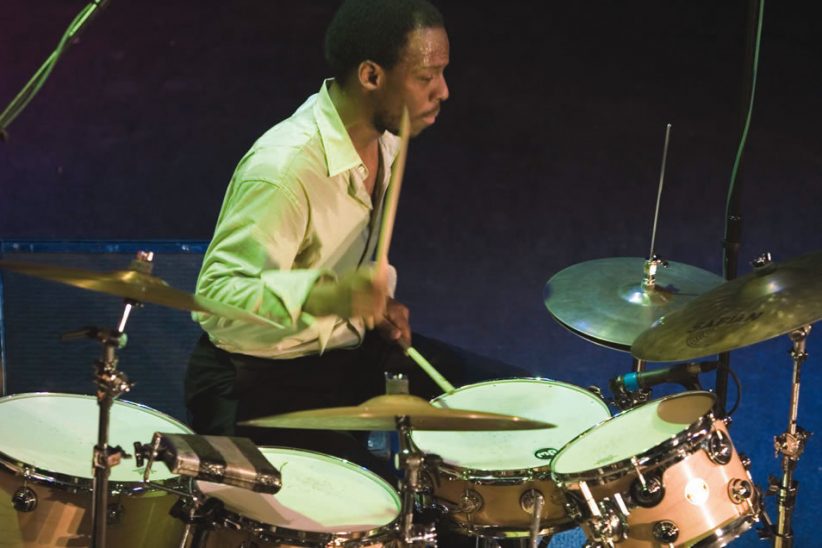 The St. Lucia Jazz Festival had already been swinging for seven days before my arrival on Friday, May 6, just in time for the opening of the main stage. Unfortunately, my first evening there the rain that I left at home had followed me to the small, volcanic isle in the middle of the Caribbean. But inside the well-laid out confines of the Gaiety Theatre in Rodney Bay, the Ravi Coltrane Quartet quickly made the weather irrelevant. Accompanied by pianist Luis Perdomo, bassist Drew Gress and drummer E. J. Strickland, Coltrane continued on the journey of finding his own artistic space while neither eschewing nor getting lost in his late father’s heavyweight legacy.

On tenor and soprano, Coltrane delivered the mix of buttery-smooth intonations and free-boppish changes that are showcased on his latest disc, In Flux. The interplay between the four was as tight as expected, but one sensed—akin to watching tightly bunched racehorses down the final stretch—that someone was about to break out of the pack. Strickland seized that opportunity midway through the midtempo “Angular Realms” to launch the first of several truly stunning solos. Booming power, speed, full rhythmic and melodic range—it was all there. Strickland exuded that sense of being outside oneself, of being in the zone yet still connected to everything and everybody else in the moment. The near-capacity crowd felt it, too, and responded with rapturous applause.

After a brief break, it was time for another legacy to be explored. Drummer Ben Riley kept time for Monk during the mid-’60s. With the maestro gone, Riley has decided to leave the piano chair vacant and rely on a four-horn frontline plus guitar and upright bass to explore Monk’s music. The supple, swinging band included tenor man Wayne Escoffrey, Bruce Williams on alto (and soprano), Jay Brandford on baritone and trumpeter Don Sickler, who also handled arranging duties, plus bassist Peter Washington and guitarist Freddy Bryant. For his own part, Riley started off a bit tentative, as if wanting his guys to establish themselves first. But as the night progressed, Riley picked up the pace and put his authoritative stamp on the group. By the time Coltrane and Perdomo joined the group for “Evidence,” the Monk Legacy Septet had endeared itself to the audience.

That was about as much straightahead jazz as I would hear for the duration of the trip—save for a few brief but tasty sessions during the after-hours street concerts. (Before my arrival, Monty Alexander, Pharoah Sanders, Kevin Mahogany and several local and regional jazz acts played.)

From the Gaiety, the action shifted to the main stage at Pigeon Island, which was formerly a standalone fort and is now joined to the main island by a man-made causeway. There, Ronnie, Ricky, Ralph, Mike and Johnny—better known as New Edition—threw down a greatest hits package that recalled the Temptations or the Four Tops at their respective peaks. Jumping, twirling, dropping to their knees and just plain bogeying, the group worked up a sweat that of course led to their abandoning their fancy pinstripe suits. But it was on the ballads that they truly shined. Johnny Gill, in particular, was on fire, infusing his now customary vocal acrobatics with palpable pathos. Gill then took it to the next level by bringing out American Idol‘s Fantasia Barreno to join him for a section of an extended reading of “My My My.” Needless to say, the crowd went wild.

The boys picked up the tempo for the closing number, “If It Isn’t Love.” If an encore had been on the cards, it wasn’t delivered, but in a sense it was hardly needed. Both fans and newbies got all they could ever ask from New Edition.

The next day at Pigeon Island was all about Fantasia. With her engaging, emotional delivery, she trumped headliners the Isleys and support acts Dave Koz and St. Lucian sax hero Rob “Zi” Taylor.

Taylor opened the Saturday proceedings amid blazing sunshine and the kind of humidity that made the cold-beverage sellers grin like Cheshire cats. Taylor used his easy rapport and heartfelt playing to good effect. It was largely in the service of his latest album, Rise Up, a pleasant if inoffensive collection of R&B tunes spiked with reggae and Caribbean flavors and, in some instances, Taylor’s own vocals.

Then it was “baby mama” time as Barreno repped for the “independent women,” who judging from the rapturous applause and screams must have been the largest contingent in the venue. But the loudest cheers were saved for her post-Idol hit “Still in Love.” Barreno ended her Caribbean coming-out party with tearful declarations of love for the audience.

Ron Isley did not look anything like a man recently recovered from a stroke. True his mobility seemed somewhat limited, but not unusually so for a man who had his first hits in the 1950s. With brother Ernie on guitar (the remaining nucleus of the family group), the Isleys effortlessly went through their ’70s and ’80s catalog of “bedtime soundtracks”: “Between the Sheets,” “Footsteps” and “For the Love of You” as well as midtempo numbers like “Who’s That Lady?” and ’60s-era stompers like “Fight the Power” and “Shout.”

The second half of the act was the “playa’s ball” with Ron, decked out in full pimp regalia, going through his “Mr. Biggs” routine. Their recent hit, “Contagious,” was the best received of this set, but the presence of some leggy dancers throughout the show didn’t hurt and neither did Ernie’s customary extended solos, particularly on the quiet storm staple “Atlantis.”

Saxophonist Dave Koz had no hired dancers, so he improvised by incorporating a few well-timed shuffles into his act with some help from his guitarist and bass player. Koz also left the confines of the stage to perform a special pre-Mother’s Day serenade for a random member of the audience as festival security and shutterbugs jostling for ideal positions. The Mother’s Day lineup stayed firmly in the middle of the road. Leadoff act Tracy Hamlin (from Pieces of A Dream) generated some early heat putting her smoky vocals and sassy physicality on tracks from her solo disc, Seasons. She started off, ironically enough, with “Ain’t No Sunshine,”# a tribute to early Pieces of a Dream influence Bill Withers, added some gospel in the form of Yolanda Adams’ “Still I Rise” and dedicated her original “Because I Am Special” to the mothers.

On Sunday at Pigeon Island, Oregonian Chris Botti admitted to feeling the heat when he took the stage, but his playing didn’t reflect it. He went through a number of tracks from his latest, When I Fall In Love, including an intense reading of “Someone to Watch Over Me,” before following in Koz’s footsteps and going into the crowd to play “My Funny Valentine.” Back up on the platform he did the uptempo “Why Not?” which gave drummer Billy Kilson the welcome opportunity to stretch out.

Earl Klugh and his combo then delivered their usual mix of Brazilian and Motown-inflected lite funk, sustaining the smooth-jazz paradise vibe. With a vast catalog at his disposal, Klugh mostly dispensed with the chatter and let the music do the talking. As Hamlin had done earlier, he invited local guitar maestro Ronald “Boo” Hinkson on for a free wheeling jam, which also featured an outstanding solo from Klugh’s bassist.

As the shadows lengthened the crowd swelled, signifying great expectations for the night’s headline act, UB40. The reggae-rockers presented a retrospective of their 25-year career and of their primary influences, including the set-opening, Temptations’ staple “Way You Do the Thing You Do.” Throughout the set lead singer Ali Campbell “dubbed and wined” (gyrated) in time as the band reeled off a string of covers and originals designed—as they had conceded in a previous press conference—for the audience to sing along to. And they readily complied.

All told, it was a solid weekend’s worth of music, with the emphasis on entertainment, on the ease of the familiar and on taking material from current and previous recordings and swinging them live. I’m not sure if much of what I witnessed on the main stage will remain in memory, but I know I’ll hear E.J. Strickland’s mesmerizing stick work in my head even when my grandkids are bouncing on my lap.