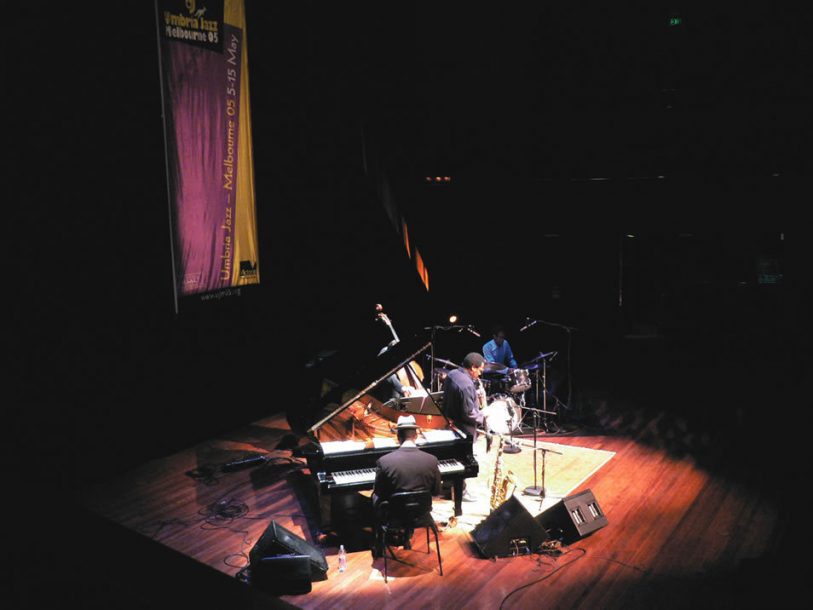 Melbourne, Australia, has hosted an international jazz festival since 1998 (with a year off in 2002 due to funding problems). It was a relatively modest event until this year, when Melbourne raised the bar by joining forces with the Umbria Jazz Festival of Perugia, Italy.

The festival in Perugia is one of the world’s largest annual jazz events. It has been running since 1974, always offers a lineup full of major names, typically attracts a total attendance of 200,000 and takes over the hill town of Perugia for most of two weeks. Many features of Umbria Jazz Melbourne 05, including its duration, were patterned on the Perugia model. There were free daily open-air concerts in a large public square-Federated Square, in Melbourne’s case, just off downtown on the Yarra River, offering lunchtime crowd-pleasers like the Italian group Funk Off and Dr. Bobby Jones & the Nashville Super Choir. Marching jazz bands wound through the streets of the city. There were noon and afternoon and evening and midnight performances in a variety of venues large and small, almost all of them within a block or two of Federation Square.

What Melbourne lacked was the star-studded program of Perugia, the 30-year tradition and the caressing sunshine of an Italian summer. (May is autumn in Melbourne.) As a result, attendance at some events was disappointing. Still, the sponsors, both Australian and Italian, claimed victory, and promise there will be an Umbria Jazz Melbourne 06. The victory was real. There was a lot to like about this festival. It ran smoothly; Australians are perhaps the world’s warmest hosts; Melbourne, in crisp, clear fall weather, provided a stunning modern cityscape for a backdrop.

Of course, the music was the point, and it came in three categories: American (including the festival’s headliners Wayne Shorter, John Scofield and Karrin Allyson), Australian and Italian. The music was usually first rate, and the festival contained two genuine revelations: both alto saxophonists, one a schoolboy and one a senior citizen.

Francesco Cafiso, 15, has been performing publicly with established international jazz musicians since he was nine. In 2002, when he was 13, he opened for Wynton Marsalis and the Lincoln Center Orchestra at a jazz festival in Pescara. Marsalis was so impressed that he invited Cafiso to join his 40-day European tour. But outside Europe and perhaps New York (where he has made several appearances), Cafiso is yet to be discovered by the jazz world at large. That world is going to be knocked down and laid-out flat.

At the Melbourne festival Cafiso played almost exclusively with the Harry Allen-Joe Cohn Quartet, a retro swing ensemble. He blew the roof off every venue they put him in. There was the large Forum Theatre (on Flinders Street across from Federation Square), the BMW Edge (a small, steep, glass-enclosed space with killer acoustics and a view over a park to the Yarra River) and Bennett’s Lane (a funky, intimate club where Cafiso played a midnight set every night but one of the festival).

Suave tenor saxophonist Allen would usually go first on tunes like “Stompin’ at the Savoy” and “Jumpin’ at the Woodside.” Then Cafiso would shoot out of the ensemble, briefly orient himself and fly. In a tone blindingly bright yet singing, his wails climbed to long held notes that broke off in passionate flurries. One night at Bennett’s Lane, in a quick-on-quick “Cherokee,” his torrential inventions were like vertical fountains, each one arcing higher than the last. When he was finally spent he released his mouthpiece, looking flushed and wide-eyed, startled at what he had just done. Then he smiled, angelically.

It is possible that no jazz saxophonist has ever reached Cafiso’s level of creativity and command (including sheer speed) at such an early age. It should be fascinating to watch his future unfold.

The other revelation of the festival was Graeme Lyall. In the 1970s he was a prominent figure on the Melbourne jazz and studio scenes, but moved to Western Australia 20 years ago and became a music educator, composer and only rarely a player. He appeared at the Forum with the Joe Chindamo Trio, and it was hypnotic from his first phrase. Imagine Paul Desmond, but quieter, intensely distilled, with a tone even more airy and evanescent. Lyall can silence a large room with a whisper. On “Where Is Love,” his brushing against Lionel Bart’s melody was like an emanation of pure spirit. While his touch is light, it is also precise, and proceeds in ideas that arrive as entirely fresh, yet inevitable. On “Every Breath You Take,” Chindamo creatively decorated around Sting’s song and then Lyall just wafted it, let it float by itself on the air. Graeme Lyall is an artist who possesses vast quantities of a rare quality: grace.

Highly selective examples of other noteworthy moments in a long festival:

The Wayne Shorter Quartet, with Jason Moran substituting for Danilo Perez, gave two concerts in Hamer Hall, a beautiful, towering concert space across the Yarra River from Federation Square. The first was rough and halting and impulsive and occasionally incandescent. Bassist John Patitucci was the throbbing, hammering center of the storm. Drummer Brian Blade erupted like nature, random and violent. Shorter’s brief forays and breathy trills and harrowing cries were like tides of consciousness. The second concert had improved sound, a more assertive Jason Moran, more focus, more coherence and less excitement.

The two performances by the John Scofield Trio, with Steve Swallow and Bill Stewart, were cohesive and masterful and sophisticated, even when laying down kill-me-now grooves and body-slamming hooks. Scofield can sober you up in a hurry with his deep, searching ballads, but gives you only one a night: “Alfie” in the first concert; “You Don’t Know Me” in the second.

Mike Nock gave two memorable performances, one with his Big Small Band, featuring his own sharp charts and nine of Sydney, Australia’s best players, and one with his trio, closing with an epic version of “Goodbye.”

Italian pianist Danilo Rea lacks taste and a sense of proportion but is possessed of a talent that absolutely owns the keyboard and is a player to watch.

Word has it that next year’s Melbourne festival will be shorter and will take place in April, when the weather is even nicer. I hope to be there. Once you get to Los Angeles, it’s only a 13 1/2 hour plane ride.