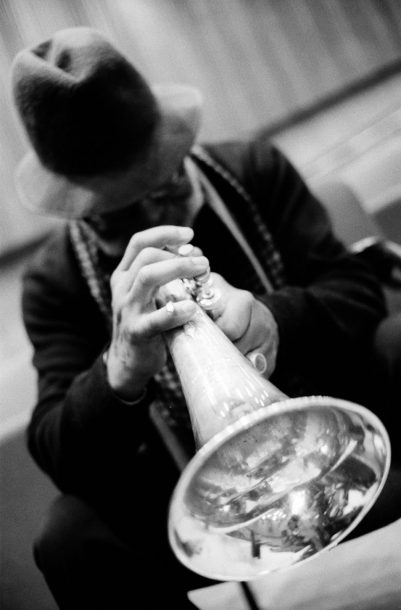 Imagine Verizon holding a convention and having Alexander Graham Bell show up as the guest of honor, or General Electric throwing a big bash for Thomas Alva Edison. That’s precisely what happened when a gaggle of guitarists from the rock, blues and jazz worlds — all bearing the name Les Paul on the headstock of their instruments — gathered to pay a fitting tribute to the father of the electric guitar on Father’s Day at a Carnegie Hall gala as part of the JVC Jazz Festival. The occasion was a 90th birthday celebration for Les Paul, who, incredibly, is still playing with youthful verve every Monday night at New York’s Iridium nightclub.

Indeed, “The Wizard of Waukesha” was no idle honoree in the Carnegie festivities. Paul’s facile playing and good-humored repartee with his crew of regulars (rhythm guitarist Lou Pollo, bassist Nicki Parrott and pianist John Colianni) provided some of the highlights in this star-studded show, which included the likes of rockers Joe Satriani, Steve Miller, Toto’s Steve Lukather and Journey’s Neal Schon, jazzers Pat Martino, Bucky Pizzarelli and Stanley Jordan, and blues-rockers Kenny Wayne Shepherd, Derek Trucks and Jon Paris. In addition, filmed salutes came in from six-stringers Ace Freeley of Kiss, Lenny Kravitz, Zakk Wylde and Carlos Santana, who likened Paul’s contributions to that of Nikola Tesla or Albert Einstein. “There wouldn’t be a Jimmy Page or Santana without him,” he said. “Les created an instrument that allowed us to articulate our vision.”

While Paul’s invention of the solid body electric guitar and pioneering use of multi-track recording and reverb are certainly as significant to guitarists as the Tesla coil is to computer geeks and Einstein’s theory of relativity is to the scientific community, Les has never been a cerebral, academic figure tucked away in a laboratory somewhere. Most of his inventions were created out of the sheer necessity of being a performer and popular recording artist through the ’40s and ’50s. As he said in the filmed tribute, produced by the Gibson company, that preceded this Carnegie show, “If I were able to buy it, then I wouldn’t have become an inventor. But it wasn’t there, so I just had to make it.”

An old-school, blue-collar showman at heart, Paul is at ease in the spotlight. He seems to take a certain mischievous pleasure in disarming audiences, as well as his fellow performers on stage, with shtick and off-the-cuff humor that can get bawdy at times. (He told the packed Carnegie crowd that he had just written a song for an upcoming album called “I Want To Tell You That I Love You But You’re Sitting On My Face”). But when he gets down to the business of playing, as he did so tastefully on golden oldies like “Blue Skies,” “Up A Lazy River,” “I Can’t Get Started” and “Somewhere Over The Rainbow,” he can charm audiences with his warm-toned facile lines and well-developed sense of humor conveyed through signature embellishments like forceful string-bending, outrageous glissandos, ringing harmonics and exaggerated whammy bar articulations.

With singer Madeleine Peyroux, Les and his crew turned in a lovely rendition of “It’s Been A Long, Long Time,” which he had recorded with Bing Crosby back in 1945. And of course, with Les you always get a bit of reminiscing about each song. “That song was a #1 hit worldwide,” he told the Carnegie crowd, “and all I got was $200!”

When Allman Brothers Band slide guitarist Derek Trucks came out with his red Gibson SG guitar, Les asked about the silver metal tube around his finger. “Oh yeah, Floyd Smith had one of those,” he told the youthful Trucks. “We used to jam up in Harlem during the ’30s.” Seeming in awe of the iconic Paul, Trucks nevertheless turned in a beautiful rendition of “Good Night Irene,” creating all manner of vocal nuance and plaintive cries with his metal slide.

Jose Feliciano flashed some flamenco flourishes on a faithful reading of “How High the Moon,” a huge hit for Les Paul and Mary Ford in 1955. (From 1953 to 1960 they were the first rock ‘n’ roll reality TV couple decades before Ozzy and Sharon Osbourne came onto the tube.) During Nikki Parrot’s upright bass solo on that familiar tune, Paul stopped the music and asked the gorgeous Aussie to come up front next to him and start her solo over. A willing foil for many of Paul’s off-color jokes, the two have developed an effective comedic chemistry over the course of countless Monday nights at the Iridium. And in hallowed Carnegie Hall, Paul pulled out one of the regular punchlines he has worked up with Parrot. “When I look at her,” he told the crowd during her bass solo, “I feel like a condemned building with a new flagpole on it.”

Jazz guitar great Bucky Pizzarelli performed a stirring solo rendition of Django Reinhardt’s delicate “Nuages” before Paul and his sidemen joined in. Ever the prankster, Paul dropped out at one point during Pizzarelli’s dazzling solo and began to mockingly blow his nose into a handkerchief. When Pizzarelli looked back over his shoulder to see what the crowd was laughing at, Paul offered him the used hanky, saying, “You want it? I’ll autograph it for ya.”

Another highlight in this jazzy second half of the show was Pat Martino’s energized rendition of “Sunny,” a piece that he recorded in 1972 on his Live! album. Backed by bassist Will Lee, drummer Omar Hakim and pianist John Colianni, Martino ignited the bandstand with his flurries of rapidly picked single note lines and Wes Montgomery-style octaves.

The first half of this gala, in which a host of rock guitar heroes were paraded out one by one to flaunt their licks, did not fare as well as Paul’s half of the show. While Carnegie Hall may be a world-renowned venue for symphony orchestras, it is a notoriously bad room for electric instruments. Consequently, the house rhythm tandem of Lee and Hakim were reduced to a loud rumble in mix, eliminating any articulation or nuance in their playing. This was especially noticeable in their collaboration with rock guitar virtuoso Joe Satriani on his chops-busting “Satch’s Boogie,” which opens with some rather intricate bop-inflected unison lines in the head before segueing to an open field boogie romp. The band’s struggle to perfect that challenging, slash-and-burn jam in rehearsals was sabotaged by a hopelessly muddled sound mix in the house.

Louisiana-born blues rocker Kenny Wayne Sheppard came strutting out on stage carrying what Paul likes to call “the wrong guitar” (a Fender Stratocaster). His performance on “Let Go” (yet another tune on this rock portion of evening that had nothing whatsoever to do with Paul) was full of so many blatant Stevie Ray Vaughan ripoffs — from choice of notes and vibrato right down to the choreographed grimace and Texas guitar hero stance — that he can be easily dismissed as an SRV clone. And why Edgar Winter (“the wrong Winter”) was on the program instead of his guitar-playing brother Johnny, I’ll never know. His version of a gospel inflected “Fight to Live,” accompanying himself on a mustard-colored Baldwin piano, was schmaltzy and pointless, while his rendition of Rick Derringer’s “Rock & Roll Hootchie Koo,” with Shepard and Lukather on guitars, sadly lacked the hooky riff that Derringer had originally created for that song back in the ’70s during his stint with Johnny Winter’s high-flying arena rock band.

Stanley Jordan’s brilliant reading of a classical piece highlighted his extraordinary contrapuntal abilities with his patented two-handed tapping technique. Journey guitar slinger Neal Schon flaunted some searing bent-string prowess on an earthy blues but was nearly upstaged by Broadway singing star Lillas White, who belted with toe-curling, Aretha-esque authority. And Peter Frampton, playing a black Gibson Les Paul Custom, turned in spirited performances of the Atlanta Rhythm Section’s “So Into You” and his own instrumental, “Off the Hook.”

A big surprise of the evening, and a clear crowd favorite, was Tommy Emmanuel, an accomplished fingerstyle player from Australia who lit up the stage with his piece “Mombassa,” in which he turned the wooden body of his acoustic guitar into a percussion instrument. Emmanuel’s remarkable display of two-handed slapping, tabla-style tapping and string scratching earned him a rousing standing ovation.

One of the most touching tributes to Paul was turned in by rocker Steve Miller, who prefaced his performance with a personal anecdote about getting his first guitar lesson from Les at the age of four. (Miller’s father was the best man at Paul’s wedding to Mary Ford.) “He’s been my main inspiration for my entire life,” Miller told the crowd. Indeed, Miller’s echo-laden intro and radical glissandos on his mega-hit “Fly Like an Eagle” sounded like quintessential Les Paul. Miller later came out to serenade Paul with a loungey rendition of “Nature Boy” (a very strange, enchanted choice for the Joker).

The gala came to a rousing conclusion with blues singer and harmonic ace Jon Paris leading the entire assemblage of six-stringers, Paul included, through a raucous rendition of Louis Jordan’s anthemic “Let the Good Times Roll” (a tune that he regularly plays with Les on Monday nights at the Iridium). Lining up across the stage, they took turns soloing over that familiar 12-bar shuffle blues. Unfortunately, the first four soloists in the parade of riffs (Frampton, Shepherd, Satriani and Lukather) were totally lost in the mix to the point where it looked like they were playing air guitar up there on stage. The soundman was able to correct this unforgivable blunder by the time fifth guitarist Martino soloed, and the rest of the gang proceeded to jam in order until frontman Paris brought the proceedings to a crashing finale.

The diversity of the music at this concert spoke loudly of the diversity of Les Paul himself. And the heartfelt testimony by one and all showed just how many lives this great man has touched and how much he in turn is loved.