Skip to content
Become a member and get exclusive access to articles, live sessions and more!
Start Your Free Trial
Home > JT Archives > Bill Charlap and and Renee Rosnes 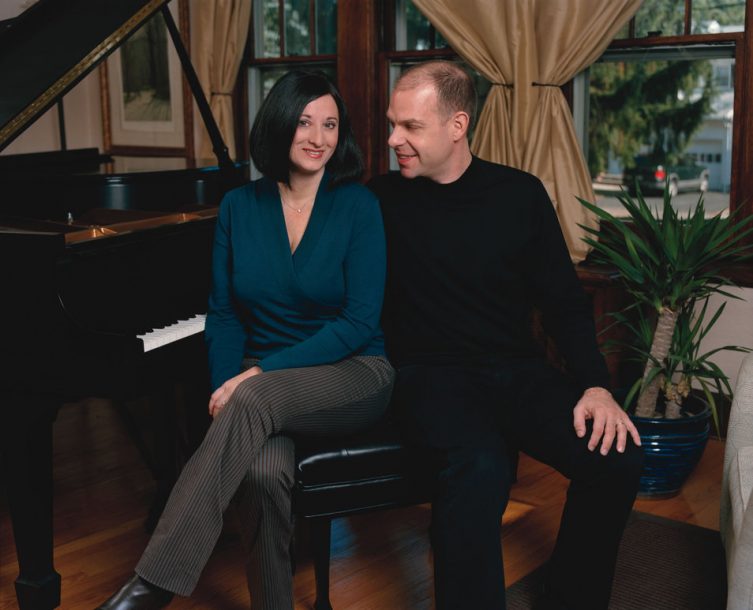 The two-car garage isn’t the first thing a visitor notices upon entering the suburban New Jersey home of Bill Charlap and Renee Rosnes. It’s the two-piano living room. The Steinways cuddle in the center, leaving little space for furniture or much else. The majestic instruments draw the eye immediately. They-not Rosnes’ small but carefully tended garden in back, not the kids’ game systems, the artworks or the handsome wood details that give the interior of the home a somewhat rustic look-are the tip-off: Something happens inside of these walls that doesn’t take place in the other homes strung along the sprawling road connecting West Orange to other municipalities.

Both Rosnes and Charlap, who were married last August, were already living in the area before they bought this four-bedroom colonial-style house, built circa 1925, nearly two years ago. Their children’s other families also lived nearby-Sophie, age 10, Dylan, 9, and Vivian, 8, are from Charlap’s and Rosnes’ previous marriages. The location, says Rosnes, is perfect for everyone: “close enough to Manhattan but far enough away that we can live in the lifestyle we’d love to. Having children it’s wonderful to have a yard and be close to parks and good schools. And it’s a pretty neighborhood.”

Unless they are jazz fans, chances are that the neighbors would never guess that the well-dressed, 40-ish couple in their midst are internationally renowned musicians. But the pianos are only the first clue that this is not a home occupied by stockbrokers or marketing executives. The next is the small room adjacent to piano central, where Charlap keeps his impressive collection of vintage vinyl LPs. There’s a wall-length shelf full of them-jazz, classical and theater, mostly-sectioned off by genre and subcategorized alphabetically. Charlap delights in showing off obscurities to the visitor, while confiding that he’s not much of an audiophile-to him it’s the music that matters, not what it’s played through. (At present, the turntable isn’t even functioning.)

There’s more music in the attic. Hundreds of CDs line up under a small window that, Rosnes happily points out, on a clear day reveals the Empire State Building some 20 miles to the north. Directly across from the CDs is a wall of music books and sheet music, some of which belonged to “Moose” Charlap, Bill’s late dad, famous for writing much of the music for the timeless musical Peter Pan in the mid-’50s. And there’s a smaller keyboard, a digital model that Charlap brands a “workhorse.” He leaves no doubt that it’s a second-class citizen compared to the two beauties downstairs.

Charlap and Rosnes, who pronounces her first name ree-nee, were married last August, at Dizzy’s Club Coca Cola at Lincoln Center. “It wasn’t huge,” says Charlap, “but it was nice to be at a place that was centered around our musical lives. Freddy Cole sang us down the aisle.”

“And your mother sang at the reception,” adds Rosnes, referring to cabaret singer Sandy Stewart, with whom Charlap has recorded and performed. Both Rosnes and Charlap played at the wedding as well.

For the event, Rosnes wore a sari, in honor of East Indian heritage she was unaware of early in her life. “Renee was adopted and raised by an English mother and Norwegian father in Vancouver,” Charlap explains. “She discovered her birth mother about 15 years ago.”

“I’ve been getting into the culture,” adds Rosnes. “I have a whole new family. I have five new siblings and we’re very close and they have children, too.” Both her birth family and her adoptive family attended the wedding.

The couple had known each other peripherally when they toured Japan in 2003, as part of a program featuring 10 well-known pianists. During the tour, Charlap says, “We got to know each other just as friends, but we really got to care about each other as people.” It took a couple of years until their relationship flowered. Now that they’re settling into their new lives, juggling schedules-theirs and the kids’-is more time-consuming than before, but, says Charlap, “We improvise and we work together. It’s a balance.”

That planning also includes finding time to rehearse. “From 3 o’clock on today,” says Charlap, the time the kids were due home from school, “this is not going to be a quiet house.”

But they wouldn’t want it any other way.

“In many ways being at home is kind of like a vacation for us,” says Rosnes. “Not that we wouldn’t enjoy traveling, but those are times to come.”

Adds Charlap, “I know it’s boring, but when we’re asked what our hobbies are outside of music … music is our profession, our love, our spiritual quest.”

“Our life journey but also our hobby,” continues Charlap. “I can’t remember a weekend where I ever said, ‘Get my pipe and slippers, Eliza. I’m gonna turn on the fire.’ It doesn’t quite work that way.”

Says Charlap: “We have a lot of DVDs and one of the things we like to do, because we don’t have the time to regularly watch HBO or anything like that, is to discover some series that we haven’t seen. We don’t have TiVo or whatever that is. We may be the only two people in America who had never seen The Sopranos. We’d never seen it until a month ago. In one of the episodes there was a scene at the Ritz, which is a diner near here. In the diner they have photographs of all the actors on the wall.”

“We don’t have a home recording studio. We’re acoustic piano players, so if we made records here, you would hear the cars go by,” says Charlap.

“That’s true. I didn’t think of that. But it would be nice to record at home,” says Rosnes.

“We’d have to do it in the middle of the night and block off the street,” says Charlap.

Says Charlap: “Renee’s a great cook, and I like to eat, so it’s a perfect combination. We’ll go to a restaurant and I’ll say, ‘I really love this,’ and she’ll say, ‘Oh, I think I can make this.’ And she can. Recently we went to one of our favorite places, Dévi, on 18th Street [in Manhattan]. It’s an Indian-based restaurant. They have incredibly great lamb chops there and Renee came home and just made them.”

Says Rosnes: “When I first met Bill he didn’t have a computer.”

“I didn’t have a cell phone, either,” says Charlap. “My press agent used to get furious with me and said, ‘Get a cell phone!’ I bought one in Chicago and called him and said, ‘I got a cell phone. What do you think of that?’ And he said, ‘Hallelujah.'”