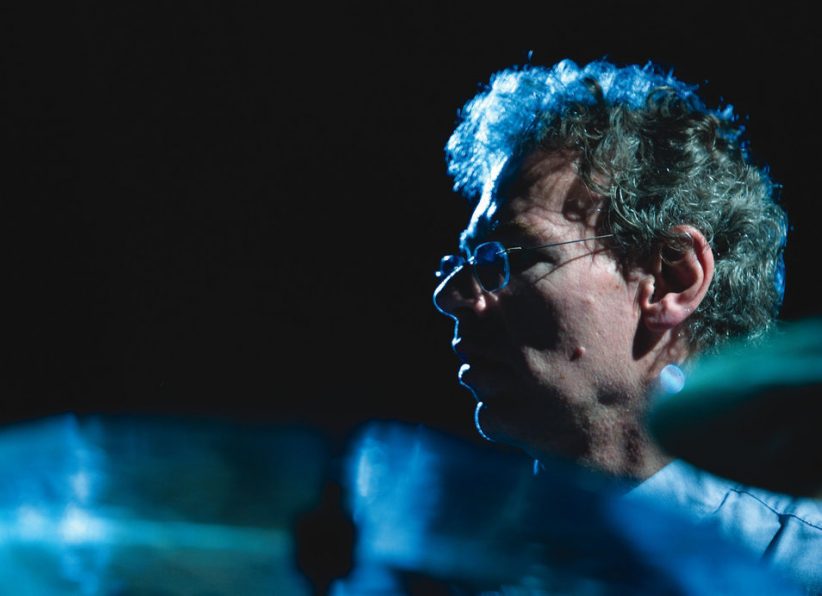 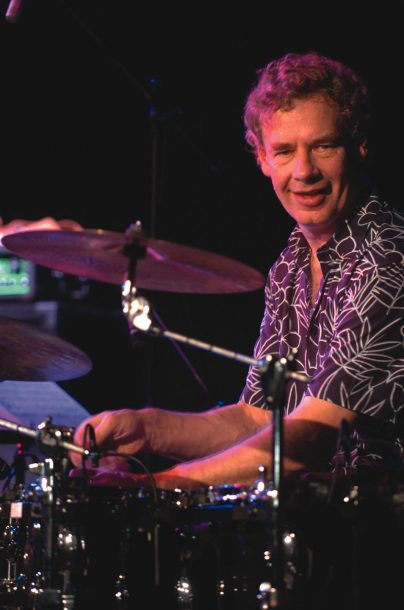 It’s hard to figure which fact is more unbelievable, that Jan. 1, 2008, marked the start of Bill Bruford’s 40th year in the music business, or that May 17, 2009, will be the seemingly ageless drummer’s 60th birthday.

All will appear in Bill Bruford: The Autobiography, to be published in May 2009 by Jawbone Press, which will outline Bruford’s serpentine musical journey.

“It’s about a musical life,” Bruford says by phone from his Surrey Hills home office in southeastern England. “But more interestingly it’s about the musical life, in the broader sense, as I’ve lived it for four decades. The pleasures, perils and pitfalls of playing percussion in public, certainly, but also about what musicians do in the daytime. It’s for the starry-eyed beginner and seasoned pro, but I’m more intrigued by the layman, the person who doesn’t know anything about the music scene. I’d like to bring the stuff we’re talking about to the checkout girl at the supermarket.”

A star who’s obviously not on a star trip, the hands-on Bruford avoids go-betweens by personally answering his phone.

“Of course I answer the phone when I’m around,” he says. “Who do you think I am, Elvis Presley?”

The native Brit’s dry humor also surfaces when he’s asked if he ever considers getting a secretary.

Bruford is equal parts drummer, composer, businessman and family man. He celebrated his 35th wedding anniversary this year with wife Carolyn and their three grown children. He maintains his thorough, informative personal Web site, and has run his own two-headed recording label since 2004. Summerfold Records releases mostly new efforts by Earthworks and other Bruford collaborators; Winterfold Records mostly expanded reissues from the drummer’s pre-Earthworks catalog. All feature the drummer’s heady compositions.

“Ironically enough, as the ‘Godfather of Progressive Rock Drumming,’ as I have amusingly been dubbed, all I ever really wanted to do was play jazz, or something close,” Bruford says.

This year’s Summerfold releases include Footloose in NYC by Earthworks and In Two Minds by the duo of Bruford and Dutch keyboardist Michiel Borstlap. Winterfold’s latest reissues are the Rock Goes to College CD and DVD by Bruford, the drummer’s molten late-1970s fusion quartet with guitarist Allan Holdsworth, bassist Jeff Berlin and keyboardist Dave Stewart.

“Most of the time I’ve been so busy making the music,” Bruford says, “that I’ve had no time to figure out whether it got released in Finland, and if so, where the money went. Amazingly, we have some 30 titles now, and more releases in the spring of ’09. Summerfold’s next fresh release will be by PianoCircus, featuring [British keyboardist] Colin Riley and myself. This occupies the gray area between classical, jazz and ambient electronica, known around here as ‘new music.’ I expect it to be an enormous hit with adventurous checkout girls.”

“If you didn’t know anything about me and my pals, and wanted to stick a toe in the water,” Bruford says, “these are where you’d start.”

His forthcoming memoir could signify a second toe.

“The demand exists,” Bruford says. “It’s evident, from the many people I talk to, that they haven’t a clue about what we instrumentalists do or why we do it. So I thought I’d tell them. I very much enjoy talking to informed fans, but the danger we face is preaching to the converted: jazz guys playing to jazz freaks who read jazz magazines; drummers playing to other drummers reading drum mags at drum clinics. The great pleasure in playing a free festival for a thousand people milling about in a Spanish town square is that you have the opportunity for your music to engage with the uninformed, so they receive it exactly the way it is, without the marketing hype.

Anyone who’s listened to or read up on Bruford knows that the drummer does very little without informed forethought. His site includes separate discographies for releases with Yes, King Crimson, Bruford and Earthworks, plus a session scroll that includes Al Di Meola, Brand X, David Torn, Annette Peacock, Patrick Moraz, Gong and the Roches. Other lengthy entries follow the Frequently Asked Questions and Equipment headings, and the Timeline section details Bruford’s birth in Sevenoaks, Kent to the present.

The lasting impression is that Bruford is more of an intellectual musical strategist than most drummers. He’s a gifted composer, and a largely self-taught musician who plays complex music that many trained drummers can’t. Plus, he’s a non-tech-head (“I’m not so big on nuts and bolts,” he says) who nonetheless has been at the forefront of unorthodox drum technology for the past 35 years.

Early with King Crimson, Bruford set up gongs, bells and blocks around himself after percussionist Jamie Muir left the band. With U.K. and Bruford, the drummer employed Remo “roto-toms,” which could be tuned or de-tuned by hand while playing. When Bruford left U.K. in 1978, replacement Terry Bozzio used a similar setup.

In the 1980s, Bruford practically kept electronic drums relevant by incorporating Simmons pads with Earthworks and the re-formed King Crimson. He also employed the high-pitched cylindrical Tama Octobans that Stewart Copeland used with the Police. In the initial lineup of Earthworks, Bruford was purposely the only musician who used electronics in the otherwise acoustic jazz lineup. His current unusual kit is all-acoustic, flat and symmetrical, with mirrored tom-tom, floor tom and cymbal arrangements to either side of his central bass drum, snare drum and hi-hat cymbals.

Like jazz great Tony Williams, Bruford became influential enough in his early 20s, and played for long enough, to become an influence on many drummers in the 1970s, who have since returned the favor.

“I think there is a neo-prog group of drummers like Neil Peart [from Rush], Danny Carey [Tool] and Mike Portnoy [Dream Theater], who grew up on some of the British prog ideas and have carried that torch forward,” Bruford says. “Being super-influential, they’re passing it on. That line of drumming is outside the jazz tradition, of course, but it turns out that it’s becoming its own tradition.”

The late Williams, born a few years before Bruford in Chicago, had a parallel career before dying of a heart attack in 1997 at age 51. Like Bruford, he rose to prominence as a teenager (with Miles Davis), and then branched into fusion with Holdsworth in a self-titled band. The New Tony Williams Lifetime exploded out of the gate with the 1975 release Believe It, before a subpar sophomore album hastened a breakup. Holdsworth’s next efforts would be with U.K., then Bruford, who lists Williams among his top 10 influences, yet was a late convert to that album.

“When I’m trying to come up with something fresh, I avoid other people’s work like the plague,” he says. “Eventually I heard Believe It, and it was so outrageously brilliant, I had to go and have a lie down.”

Fellow drummer Steve Smith, 54, also charted a course similar to Bruford’s. The younger player rose to prominence with the rock group Journey in the 1970s before starting his still-existing jazz band Vital Information (with which he once incorporated electronic drums) in the 1980s.

The gentlemanly Bruford is also known for his candor, especially regarding his long working relationship with King Crimson guru and guitarist Robert Fripp.

“I shall always be grateful to Robert for providing one of the most adventurous platforms that was around in rock at the time, and giving me the drum seat,” says Bruford, who replaced original King Crimson drummer Michael Giles. “That said, I was the ingénue; the man with too many ideas, too much enthusiasm, and a genuinely thick skin. Perhaps Robert was unused to having such artistic resilience in the band. He was the superior intellect, usually in possession of some arcane knowledge to which the rest of us weren’t privileged. The man with a plan, but since he wasn’t exactly letting on what the plan might be, a certain amount of inspired guesswork was called for. Basically you could play anything you wanted, so long as he hadn’t heard it before.”

Coincidence or not, Bruford’s playing has been inimitable. Like Williams, you know Bruford’s work when you hear it. It’s a rare attribute on a supportive, blend-in instrument where composers and other instrumentalists often discourage personality.

“Playing ‘Waiting Man’ with Adrian Belew and King Crimson at a set of hexagonal electronic drum pads at outdoor festivals,” he says. “Playing Eddie Gomez’s tune ‘Amethyst’ with Ralph Towner [on Bruford’s 1997 jazz-trio CD If Summer Had Its Ghosts]. Sitting down at the drums on my first show with Genesis, to see my return air-ticket on the snare drum.”

“You’re never on tour ’til the plane’s wheels are up,” he says. “You haven’t been paid ’til the check’s cleared into your account. Learn to hear your instrument the way others hear it. And be careful what you say to people on the way up, because you’ll probably meet them again on the down.”

For Bruford, the closest thing to a downward career move has been a lateral one. Earthworks continues on (“As long as I can find something useful for it to do,” Bruford says) with younger Brits Tim Garland (saxophones), Gwilym Simcock (piano) and Laurence Cottle (bass). As drumming idol Art Blakey did for youthful American musicians with his Jazz Messengers group, Bruford has used Earthworks as a rotating creative laboratory to showcase some of the U.K.’s top young players (as has its larger offshoot, the Earthworks Underground Orchestra).

Along with Williams and Blakey, Bruford’s influences range from expected drummers (Max Roach, Joe Morello) to the unexpected (Tower of Power’s Dave Garibaldi; Senegalese sabar drummer Doudou N’Diaye Rose). Yet each crafted a singular sound, like Bruford, an outside-the-box musician who incorporated non-percussive influences like chameleonic singer David Bowie (“Always one step ahead of the crowd,” he says). To call Bruford the Bowie of drumming would not be inaccurate.

Son Alex Bruford, 31, plays drums for the rock/electronica group Infadels, which bears a Bowie influence and is signed to the U.K. recording label Wall of Sound. The family’s drumming torch will be carried on as the elder Bruford, believe it or not, ponders retirement from stage and studio.

“It’s under consideration,” he says. “There’s a strong argument for quitting while you’re ahead. Every stage I’m occupying is one a younger drummer isn’t. Every interview I’m given is one a younger drummer isn’t. Maybe after 40 good years, all musicians should be required to go to their peers for a license to continue, based on relevance. Besides, Heathrow T5 [airport] is a mess.

“Relevance is everything,” Bruford adds. “Without it, you’re just earning a living. There will be a lot of thought on this and related taboo subjects in the book, with perhaps surprising conclusions.”