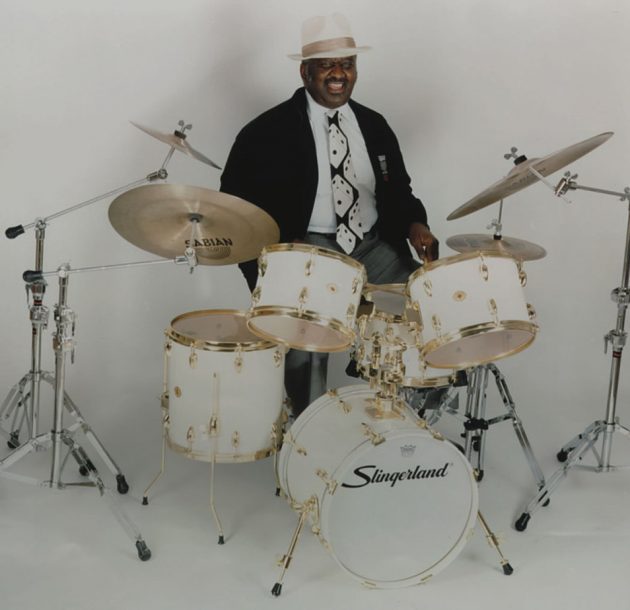 Bernard “Pretty” Purdie’s career is a singular phenomenon in the annals of American music. Born in Elkton, MD, June 11, 1939, he began his professional career at the age of 12 before moving to New York in 1961 and becoming a fixture on the thriving studio scene of the 1960s and ’70s.

In a bygone era, he compiled a track record that is unlikely to be surpassed, playing on more hit records with different groups than any other musician.

His rock ‘n roll credentials are second to none, including the original recording of “High-Heeled Sneakers” and the frat-rock classic “Hang On Sloopy” (“The only track I ever tried to mess up on purpose,” Purdie recalls. “Haunted me ever since.”) In addition, Purdie claims credit for sessions with James Brown, the Rolling Stones and the Beatles. The latter is a matter of heated debate among Beatles fans, as Purdie claims participation on 21 Beatles tracks but refuses to specify: “not unless I have a signed statement from them that it’s okay.” Although he mainly worked as an anonymous studio musician, Purdie has been credited for some (but not all) of his work in the 1970s with the jazz-influenced rock group Steely Dan.

Purdie, who cites Papa Jo Jones, Max Roach, Louie Bellson, Gene Krupa and Cozy Cole as influences, is now focusing on his Soul To Jazz series of recordings for the German ACT label. The series features well-known musicians tackling R&B soul-jazz standards. Among the stars who have contributed talent to the series are the Brecker Brothers, Cornell Dupree, Hank Crawford, Stanley Turrentine, Vincent Herring and the late Eddie Harris.