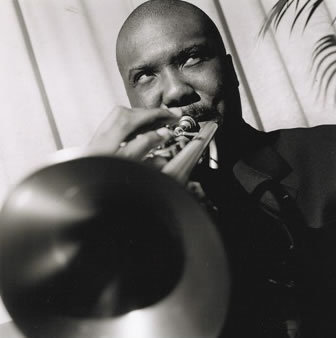 The group will play two shows, at 8 and 10:30 p.m. For ticket information, contact the Blue Note Jazz Club at 212-475-8592, or visit the Blue Note Web site. The Blue Note is located at 131 West 3rd Street, in Greenwich Village. General admission tickets are $10. Earlier that day, the Berklee Scholarship Jazz Sextet will visit radio station WBGO (88.3 FM, Newark. N.J.) to give a live in-studio performance and interview from 2-3 p.m. Listen to the broadcast at WBGO.

Darren Barrett, director/trumpet. Canadian trumpeter Darren Barrett was born to Jamaican parents who “pushed their children toward music.” As a result, Barrett and his three older brothers each became professional musicians. In 1986, Barrett attended Berklee on full scholarship, receiving a BA in professional music in 1990. During those years, his classmates included Antonio Hart, Javon Jackson, Mark Turner, Roy Hargrove, and Sam Newsome. He would later earn a MA in jazz performance and MS in music education from Queens College, and a diploma from the Thelonious Monk Institute of Jazz Performance at New England Conservatory. In 1997, he won first place in the Thelonious Monk International Jazz Competition, the biggest jazz competition in the world. Barrett released First One Up, his first album as a leader in 1999, followed by Deelings in 2001. Other career highlights include performances with Jackie McLean, Elvin Jones, and Herbie Hancock, among others. Barrett is currently an associate professor of ensembles at Berklee.

Ilan Bar-Lavi, guitar. Israeli-Mexican guitarist and composer Ilan Bar-Lavi, 22, has performed throughout South America, Europe, and the U.S. with Grammy-nominated artist Ximena Sarinana, the Zinco Big Band, Arnie Lawrence, Secret Architecture, as well as with his own group, the Bar-Lavi World Jazz Quintet. He has recorded six albums as a sideman and two as a leader, composed music for Mexico’s national cultural television station, and has scored various TV and radio ads in South America and Israel.

Jonathan Greenstein, tenor saxophone. Born in Tel-Aviv, Israel, 22-year-old tenor saxophonist Jonathan Greenstein has studied or performed with Greg Osby, George Garzone, Ralph Peterson, Joe Lovano, and Bill Pierce, to name a few. Before coming to Berklee on scholarship, he was a member of the IDF military band, where he was featured both as a soloist and arranger. Greenstein is the recipient of the 2007 AICF International Jazz Performance Studies Award. His quintet plans to release their debut album in 2009.

Josh Hari, bass. Josh Hari was born and raised in Guadalajara, Mexico, but later moved to Oakland, CA, where he taught himself cello and guitar. After switching his focus to bass, he began playing in the renowned Berkeley High School Jazz Ensemble. Upon graduation, he became immersed in the Bay Area’s rich music scene, and before long he was an in-demand sideman for both jazz and hip-hop artists, recording and touring nationally with Lyrics Born, ALBINO!, Spaceheater, Bedrock, and others. He has also worked in jazz education, teaching music at public schools and at UC Berkeley through the Young Musicians Program. Hari is currently at Berklee on scholarship and working on his debut album as a leader.

Emile Martinez, trumpet. Emile Martinez, a native of Los Angeles, CA, started playing trumpet at 9. After graduating from of the Los Angeles County High School for the Arts (LACHSA), he received Berklee’s full-ride presidential scholarship. Since coming to Boston, he has studied with Tiger Okoshi, Darren Barrett, and Ken Cervenka, and performed with the college’s Miles Davis, Art Blakey, and hip-hop ensembles. He has received honors at Jazz at Lincoln Center’s Essentially Ellington and NAACP/ACT-SO competitions, and at the Reno Jazz Festival.

Mark Whitfield, Jr., drums. Mark Whitfield Jr., from Brooklyn, NY, made his first concert appearance at 2 as a guest drummer with his father, guitarist Mark Whitfield, and clarinet legend Alvin Batiste, at the Varsity Theater at Louisiana State University. At 4, he appeared with his father’s quartet on the Good Morning America 1994 Thanksgiving Day broadcast. He would continue to perform with his father throughout his early years – at the JVC Jazz Festival in New York City, and at the jazz club, Smoke. He participated in Betty Carter’s Jazz Ahead program at the Kennedy Center under the direction of Billy Taylor and Nathan Davis. Whitfield is currently on full scholarship at Berklee, where he has studied or performed with Joe Lovano, Terri Lyne Carrington, Hal Crook, and Ralph Peterson.