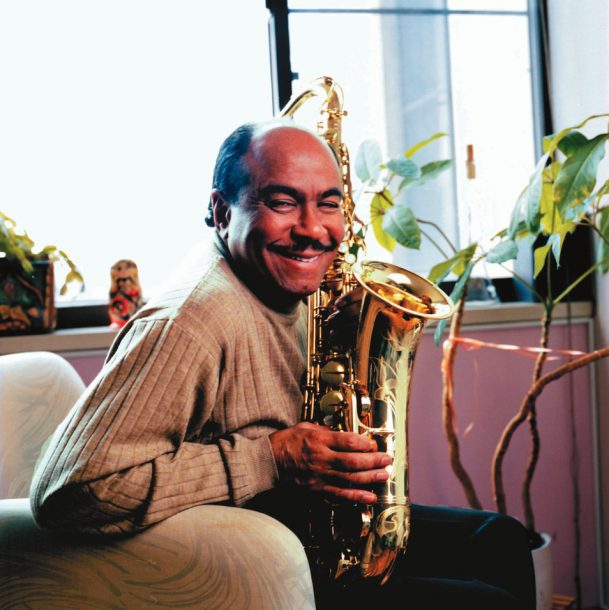 From Benny Golson’s midtown New York City apartment window you can see forever. “It’s the top floor and we have a view of Manhattan; we have a view of Jersey. On the other side we have a view of downtown Manhattan,” Golson says. As the writer of “I Remember Clifford,” “Blues March” and numerous other jazz standards, as well as a prolific arranger and soundtrack composer, Golson can afford to live on the top floor in NYC-or in Los Angeles or in Friedrichshafen, Germany, where he has a house and an apartment, respectively.

While Golson has owned his L.A. home for about 30 years, he says, “Calling it home is a bit of a misnomer. Most of the time we spend here [in New York] and in Germany; I’m only in L.A. five or six weeks out of the year. When I go there I don’t work; I just go there and kick back.”

Golson and his wife, Bobbi, have lived in their NYC two-bedroom penthouse for the past 15 of their 42 years together. Awards, honors and festival posters adorn the walls of the apartment, which Golson describes as “modern and not too cluttered. My favorite piece of furniture in here is the piano.”

The Yamaha D8 piano is where Golson does much of his composing these days. “Nowadays, because I’ve gotten lazy, I do it in the living room. If it’s something that really entails a lot, then I’ll go to the studio,” which is four blocks away. “I started out to be a piano player, so when I play the piano now, 80% of the time it’s the classics-the things that I can play! I like ‘Rhapsody in B minor’ by Brahms; I like most of Chopin’s things.”

Despite living in an apartment, freely practicing the piano or his Selmer Series 80 saxophone or rehearsing his whole band isn’t a problem for Golson. “The floors and ceilings are pretty thick, so I’ve had no complaints and I practice as much as I want; my neighbors are very understanding. Sometimes they say, ‘Oh, we heard you practicing and we turned the television off so we could hear you.’ Sometimes I have the guys come up and play, and the neighbors say, ‘Oh, we enjoyed your rehearsal.'”

Golson is lucky that his apartment is mostly soundproof. “I just replaced my audio system. I got all Yamaha; I just happened to like the sound when I went into the studio. I got a subwoofer so when I play my rock stuff it thumps, boy! I’m expecting to be put out of the building at any moment!”

If he were kicked out of his NYC pad, no problem: Golson can just fly to his home in L.A. or Germany, though he’ll have to take a cab to the airport. “We have a car in Germany [an Audi six-cylinder], and one in L.A. [Mercedes 420], but I don’t have one in New York. We used to: I made a mistake of buying one of those small, four-door Jaguar sedans and I used to park it on the street and get up and move it every morning. But they tore up the front, they tore up the back and one day a yellow cab had made a U-turn and he didn’t calculate it right and he wiped out the side of my car. Then I got it repaired and put it in a garage, and they wiped it out in the garage, so I gave up! No more cars in Manhattan!”

Audio/Video: Yamaha CDC-575 five-CD player; Yamaha KX-W421 dual-cassette player; Yamaha RX-V596 receiver; JVC HR-A22U VCR; Panasonic DVD-RV65; Klipsch (four speakers; subwoofer) and JBL Control IX (two tweeters); Hitachi TV (“About 15 years ago I was playing Sweet Basil, and at the end of one of the sets these two Japanese guys approached me, fans. One of them was a vice president of Hitachi [in Japan] and the other was a representative here. We became very good friends…I get a good deal.”)

Books: Embodiments of Mind by Warren S. McCulloch (“This guy is out in space!”); Listening With the Third Ear by Theodor Reik; The Mind by Dr. Richard M. Restak

Shoes: “I like nice shoes, and my wife knows what I like. Faragamo shoes are probably my favorites. I love their suedes.”

Clothing: “I guess I’m a slob! I’ve given up. I get dressed, and I think I’m looking pretty good, and my wife and my daughter will say, ‘Dad, you’ve got to take that off!’ Years ago, I told my wife, ‘I will never pay over 10 or 15 dollars for a necktie.’ Until a few years ago, when I ran into Versace ties. And now I am a believer. I fell in love with them.”