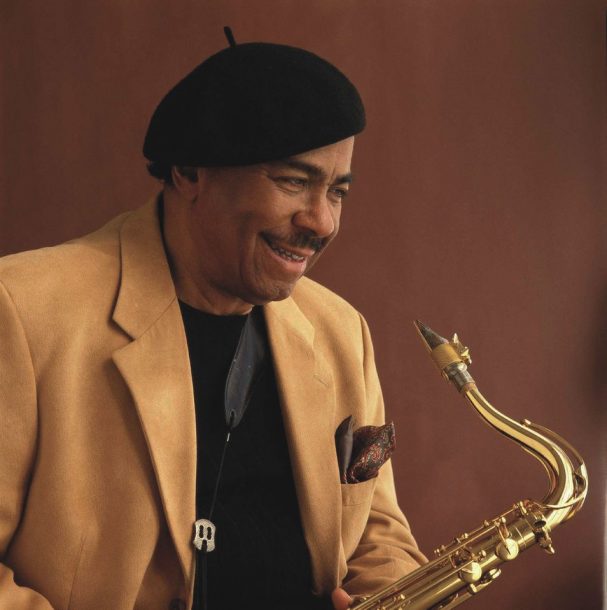 Benny Golson didn’t take it very seriously when he got a call from director Steven Spielberg about a possible part in his upcoming film. “I had been contacted several times before by directors, Woody Allen for one, and asked about being in a film,” says the saxophonist and composer. “Every time that I would go in, there would be eight or nine other guys sitting there and in the end someone else would get the job. But this time they told me that there’s no reading, no question, I had the part.”

That part turned out to be a limited yet key role in Spielberg’s latest movie, The Terminal. The film stars multi-Oscar winning actor Tom Hanks, who portrays Viktor Navorski, a passenger from Krakozia, whose passport and visa are invalidated due to a coup that erases his country. Unable to return home or leave the airport’s international lounge, Navorski is literally a man without a country. The reason why Hanks’ character even came to the U.S.? To meet Golson and have him sign a photo. “Hanks and Spielberg are real big jazz fans and were really excited about me being in the film,” Golson says.

The movie’s only part of a flurry of current activity involving Golson. His new CD, Terminal 1 (Concord), features trumpeter Eddie Henderson, pianist Mike LeDonne, bassist Buster Williams and drummer Carl Allen joining Golson on a session that’s one-third intriguing new originals, one-third reinterpretations of vintage tunes and one-third reconfigurations of Golson’s own classics. But don’t confuse it with a soundtrack release. “I didn’t want anything to take attention away from the film,” Golson says, “so the songs are designed to both honor the movie and convey to the listener the energy and feeling you get being in a busy airport.” Golson fulfills that mandate on such selections as “Terminal 1,” which has a vibrant, brisk percussive foundation underpinning a light, airy melody and structure. He varies the tune’s pace and volume, with the drums signaling passenger arrivals and departures through their intensity. Golson incorporates elements of mento and ska alongside jazz on “Caribbean Drifting,” while the rendition of “Sweet Georgia Brown” slightly changes the standard’s opening portion before segueing into straightahead middle and ending sections. Golson takes center stage with a resounding solo on “Cherry” and complements trumpeter Eddie Henderson on “Park Avenue Petite.” The entire group soars on “Blues March,” though Golson made one compositional adjustment, having the solos maintain the melody chords all the way through rather than shifting over to the basic blues framework made famous in the version on the Art Blakey LP Moanin’.

In August, Mosaic will release a seven-disc boxed set of The Complete Argo/Mercury Art Farmer/Benny Golson Jazztet Sessions. “I’m really very glad to see this music coming back out, but there are some misconceptions that people have about the Jazztet,” Golson says. “[Trumpeter Art Farmer] and I knew each other going back to 1953 in the Lionel Hampton big band, but the Jazztet didn’t start until 1959, and we weren’t together that long [only until 1962]. We made some great records during that time, but for some reason people seem to feel that the group lasted longer than it did and that McCoy played with us from the start, which is also not true.” As further evidence of that fact, the Mosaic set has been fleshed out with other sessions led by either Golson or Farmer during that time, among them an octet date and an Art Farmer Orchestra session. The esteemed list of participating players include pianists Wynton Kelly, Tommy Flanagan and McCoy Tyner, bassists Paul Chambers and Ron Carter and drummers Jimmy Cobb, Art Taylor and Albert “Tootie” Heath.

Though certainly a wonderful saxophonist, particularly on tenor, Benny Golson’s primarily known for his numerous magnificent compositions over a distinguished career that dates back to the mid-’40s, when the Philadelphia-born player began sitting in on jam sessions on Philly’s Columbus Avenue. His pals and associates included John Coltrane, Percy and Jimmy Heath and Philly Joe Jones. “I started writing almost as soon as I picked up a saxophone,” Golson says. “Even before I knew about assigning parts or even being able to write for a voice, I was trying to identify solos and write out lines. I didn’t know anything, but there I was calling myself writing songs.” Though he attended Howard University from 1947 to 1950, Golson says “that was a time when you didn’t even think about playing jazz, not around there. You could sneak into those practice rooms very early in the morning, but there was no jazz on the curriculum, and I sure wasn’t learning about writing in those classes. I had gone there to become a teacher.”

But when James Moody recorded Golson’s “Blue Walk” in 1955 Golson started receiving more attention, which turned to outright fame when Miles Davis cut “Stablemates.” It was then that Golson began gaining respect as a player and admiration and regular work as a composer. Since the mid-’50s, Benny Golson has recorded more than 30 albums as a leader, done another dozen with various editions of the Jazztet, and written scores for such television shows as Mission Impossible and The Mod Squad, plus made-for-TV films, radio and television spots. “These days it is wonderful that you have colleges and academies where musicians can go to learn composition because I certainly learned most of it from experience,” Golson says. “But there’s also things that you can only learn from putting the music on the bandstand and having the guys playing the parts. That’s how you learn about listening to particular musicians, the way they play notes, how they approach a melody, whether a whole piece really works or needs certain parts adjusted. I’m quite glad that jazz has made it to the academy, but once you leave, you must know how to apply what you’ve learned.”

Interestingly, Golson has a surprising viewpoint about the number universally regarded as his most famous work, “Killer Joe.” “I really didn’t think that song was going to do anything when I wrote it,” Golson says. “My wife said,’That’s awful.’ She got sick of hearing me constantly playing that melody and trying to work it out. Shows you what we both know, I guess.” Ron Wynn