Skip to content
Become a member and get exclusive access to articles, live sessions and more!
Start Your Free Trial
Home > JT Archives > Bennie Wallace: The Ballad of… 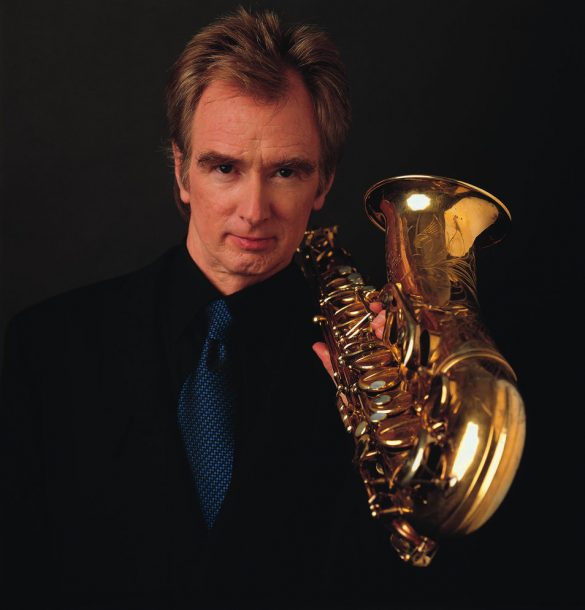 It was 20 years ago that Bennie Wallace, the incisive tenorman from Tennessee, debuted as a leader with The Fourteen Bar Blues on Enja. That frenetic trio outing with drummer Eddie Moore and bassist Eddie Gomez garnered enthusiastic reviews throughout Europe and won Germany’s prestigious Deutscher Shallplatenpreis for best jazz album of the year. (It was reissued on CD last year to more high praise.)

Today an older, wiser, mellower Bennie Wallace looks back at that initial offering with a bit of bemusement. “I haven’t listened to that record in a long time,” he says. “We were kind of stretching out in a different direction in those days. There was one place where we weren’t blowing on the form at all, we were just playing kind of loose around the idea of the melody. I guess at that point the music was a little bit more wild and woolly. I hope it was a lot more immature. But you know, when you’re doing your first album there’s always a certain amount of tension, so it’s not the most relaxed date in the world.”

Wallace takes a decidedly more relaxed approach on his current and self-titled release, his second for AudioQuest following 1993’s acclaimed pianoless trio outing,Old Songs. A collection of standards by the likes of Cole Porter, Harold Arlen, Duke Ellington and Billy Strayhorn, it features Bennie’s longtime rhythm section of bassist Eddie Gomez and drummer Alvin Queen and is further graced by the presence of piano master Tommy Flanagan, who brings out an unbridled romantic quality in the tenorman.

“Tommy has a way of finding these tunes that sound very traditional but they have unusual kinds of harmonies,” says Wallace. “I really love that kind of music. And the idea here was to make a record that was more relaxed and would explore that aspect of both of our playing. When you get an opportunity to play with Tommy I think it’s really important to exploit that thing because he’s just so brilliant at that.”

On pieces like “Moon Song” (an early ’30s nugget by Arthur Johnston that he learned from pianist Jimmy Rowles), Ellington’s “Prelude to A Kiss” and a particularly moving rendition of Arlen’s “Over the Rainbow,” the tenorman dips into his finest “storytelling” mode, a la Coleman Hawkins and Ben Webster.

“I always loved ballads, I always loved playing ballads, and the great ballad players were always my biggest heros,” says Bennie. “I remember living in (Greenwich) Village around 1974 in this little place behind the Village Gate. (Radio deejay) Ed Beach had a regular show on WRVR and I used to tape it all the time. He was always playing Ben Webster and Don Byas and all those great ballad players. And I just soaked it all up. So I’ve always loved that stuff.”

While exploring his balladic side his signature use of wide, sometimes giddy-sounding intervallic leaps are particularly evident on Duke’s “Serenade to Sweden,” a swinging rhumba rendition of Cole Porter’s “So in Love” and the stirring cadenza on Duke’s “Prelude to a Kiss.” Sparks fly on his highly charged exchanges with drummer Alvin Queen on a frantic rendition of Strayhorn’s “UMMG (Upper Manhattan Medical Group).” And he settles into a comfortably blue groove on Flanagan’s opener, “Beyond the Bluebird.”

Wallace’s lone original here, “Little Surprises,” is a Monkish theme for an Oscar-nominated short film directed by actor Jeff Goldblum. “Jeff is actually a fairly decent piano player,” Bennie points out. “I faxed him the lead sheet for this tune and he played it himself during the opening credits to the film.”

It was hearing Monk, in fact, that initially inspired the saxophonist to begin experimenting with quirky intervals on the horn. [In 1981, Wallace released an album entirely devoted to Thelonious’ music, Plays Monk, Enja, with Dannie Richmond, Eddie Gomez, and Jimmy Knepper.] “I used to go hear him at the Vanguard when I first moved to town (in 1971) and at the same time I was listening to some composers that were using wide intervals and intervals beyond the octave. And I remember the first tune that I got into that on was ‘Blue Monk.’ Jack Six and I were playing together, just bass and tenor duets, and ‘Blue Monk’ was one of the heads we were shedding. And one day we were thinking, ‘Why can’t we do that in minor ninths instead of minor seconds?’ So I just tried to figure it out on the spot. And I discovered that when you play those kind of intervals, the actual tone of the instrument sounds bigger. It’s kind of like an aural illusion. And it made me think, ‘Wow, this is giving a whole new dimension to the sound of the instrument.’ So I kind of got off on developing that aspect of my playing. In fact, sometimes when I’m practicing I have to steer myself away from that…I’ve explored that so much.”

Interestingly enough, Wallace’s debut back in 1978 opened with a version of Strayhorn’s gorgeous “Chelsea Bridge.” His 1998 offering closes with that same evocative piece, performed as an elegant, affecting duet with Flanagan. “That was actually the last thing that we recorded,” says Wallace of the session produced by Joe Harley. “And it kind of left me thinking, ‘Boy, I sure would like to record some more duets with Tommy.'” (Flanagan had previously recorded with Wallace on the saxophonist’s 1980 Enja album, The Free Will .)

“Film projects can be some of the most exciting and inspiring kinds of work that you can imagine,” he says. “When you’ve got really talented people in all these areas putting something together, it challenges the musician in a different way.

On the other hand, film work can be the most aggravating and frustrating and disappointing work that an artist could imagine. I’ve done both, and a few in between.”

Meanwhile, Bennie has already recorded his next album, an all-Gershwin project with Mulgrew Miller, Yoron Israel, and Peter Washington. “We went out to Los Angeles and played for a week in May,” he says, “and at the end of the week was a Gershwin tribute for the Film Music Institute. They asked us to play an all-Gershwin set that night so we were literally learning the tunes before the gig. I knew a couple of them from before but I learned most of them on that gig. And when it came time to do this next album, the Gershwin tunes just seemed to fit. It was fun, and I really learned a lot about his music. You play those tunes from time to time all your life but I really made a quick study of as many of his tunes that I could find. I was looking for some tunes that everybody doesn’t do, although I didn’t find many.”

Wallace’s all-Gershwin project is on Enja. Meanwhile, he plumbs the depths of balladic expression on his second AudioQuest release. “I think at this point in my life I’m hearing more like that,” says the 58-year-old saxophonist. “When you’re younger you hear things in one way, and as you play more you start finding more depth in the beauty of something else that’s a little more subtle.”

Bennie Wallace plays a gold-plated Selmer Mark VI tenor saxophone that he’s had for about 20 years. He uses both Otto Link and Frank Wells mouthpieces. He is also especially pleased with his Alexander Superial reeds. “I’ve been playing the saxophone since I was 14 years old and this is the first time in my life I felt I had a good reed,” he says. “It’s made with really good French cane that’s made with an American cut, which is an incredible breakthrough. French cane is usually French cut, which causes squeaking on tenor. Every time I get an extra few dollars I buy a few more and just throw ’em in the closet because you never know how long you’re going to be able to get ’em.”

“I’ve been listening a lot to a European bootleg of Coleman Hawkins, which includes versions of ‘Sophisticated Lady,’ ‘Indian Summer’ and ‘Picasso.’ Hawkins also recorded “Indian Summer” with Barry Harris in the ’60s but this is much earlier, late ’40s. I used to have a cassette of Hawkins and Willie the Lion Smith playing ‘Indian Summer.’ There’s a record I keep going back to, Ellington’s Indigos (Columbia, 1957). It’s got some great Johnny Hodges and some great Shorty Baker on it.” I’ve also been listening to a lot of Olivier Messiaen and a couple of recordings of Pierre Boulez with the Cleveland Orchestra. And I’ve also been listening a lot to Tommy Flanagan’s record of Thad Jones tunes, Lets Play The Music Of Thad Jones (Enja, 1993).