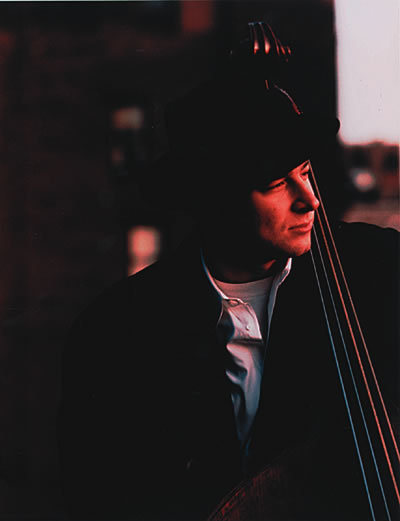 In his early years bassist Ben Wolfe played an electric instrument, but he’s strictly into an acoustic mode now. No amplifier either, if you please. While some people might think him a traditionalist, Wolfe feels differently. “I don’t look at it like that. To some people traditional jazz is New Orleans music from the ’30s…I play what I consider actual jazz. Acoustic jazz. Swing,” he says.

Born in Baltimore, but raised in Portland, Wolfe played a variety of instruments, including tuba and trombone, until finding his “musical home on the upright.” His artistic inspirations are varied. Among them are Paul Chambers, Ray Brown, Duke Ellington and Thelonious Monk. He gigged in the local clubs, then headed to New York. “I needed more challenges,” he explains.

He hooked up with Harry Connick, Jr., who at the time was not so well known. The two performed as a duo, then came the When Harry Met Sally soundtrack and things took off. “It was great,” Wolfe recalls. “I got to travel, be on TV and not worry about paying my rent. I met Wynton Marsalis through him. He’s very important to me.”

After about five years Wolfe left Connick’s band. In 1994 he joined Wynton’s septet for a year, then played in the Lincoln Center Jazz Orchestra for a season.

He performs as a sideman-presently for Benny Green-but if Wolfe had his druthers he’d be only as he is on his new disc, 13 Sketches (Mons), a leader. “That’s my whole reason for going into music,” he declares. The album has all original compositions, although there are actually 14 tunes, not 13. “Thirteen sketches sounds better,” is the bassist’s explanation for the discrepancy. He would not delete a selection for the sake of clarity, “Because the art is more important than the title.”