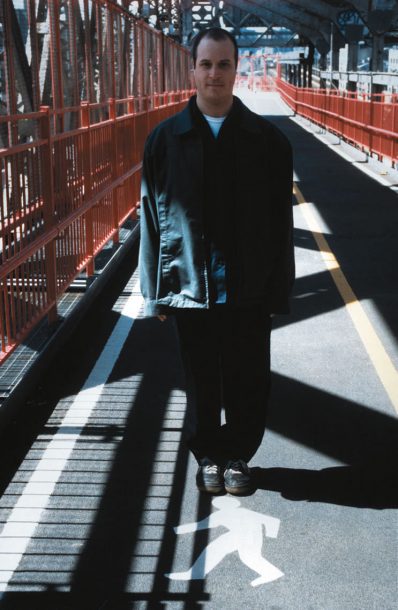 Drummer Ben Perowsky brings so much depth and versatility to the kit that he’s been a sideman of choice for an astonishing variety of players. In just the past few years, Perowsky has played on Dave Douglas’ Magic Triangle, Pat Martino’s All Sides Now, Mike Stern’s Play, and Salif Keita’s Papa while also performing with Uri Caine’s Mahler project, Don Byron’s Bug Music, and the fusion quartet Lost Tribe. There’s also the indie rock band Elysian Fields, the dub/electronica group Liminal, and a straight ahead jazz quartet led by his sax-playing father, Frank. But by far the most expressive outlet for his very melodic, Tony Williams-inspired approach to the kit remains the Ben Perowsky Trio.

Formed in 1997 for a weekly engagement at the Knitting Factory’s Tap Room, the BP Trio has developed into a vehicle for the drummer’s open-ended writing. And with empathetic bassist Scott Colley and saxophonist Chris Speed on board, the music takes on a highly conversational flow, as heard on the group’s self-titled debut on Jazz Key Music. A role model for the trio, Ben explains, was Sonny Rollins’ A Night at the Village Vanguard recordings with Wilbur Ware and Elvin Jones.

“All three of us grew up listening to those records,” says Perowsky, “But actually, my own roots go back to Led Zeppelin, Jimi Hendrix, and Pink Floyd.”

Which explains the presence of Floyd’s “Money” as the closing track, done up in loose grooving, freeblowing fashion. Elsewhere, Perowsky demonstrates a lyrical touch with brushes on his “Electric Sheep” and a decidedly Elvin-esque way with mallets on Ellington’s “In a Sentimental Mood.” He swings frenetically on Bird’s “Segment” and even offers up a take on Messiaen. Granted, that’s covering a lot of ground, but it’s still not revealing the full picture.

“I didn’t want to bring all my bags into one project,” says Perowsky. “There isn’t really one band that I could play all the different styles in. And more and more, the different bands don’t bleed into each other stylistically as much as they used to. So now I’m just going for whatever the music is dictating.”