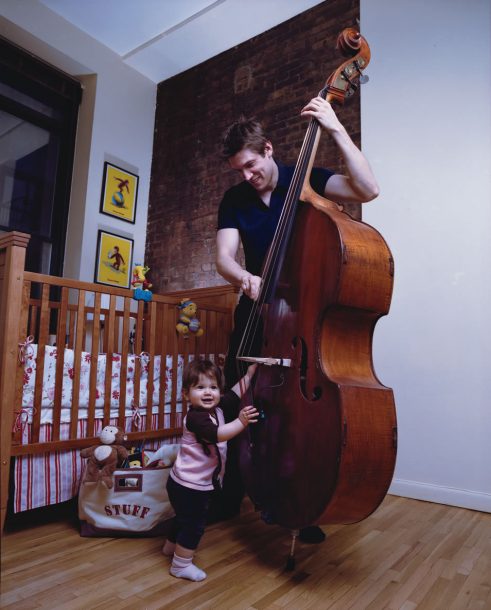 The biggest change in Ben Allison’s home life weighs 22 pounds and moves energetically about the apartment, flashing a lovable smile. Now nearing her first birthday, Ruby Serena Allison is the bassist’s pride and joy and the fruit of his recent marriage to Suzanne DiMaggio, whose field is international relations. “We dated for 17 years, then we got engaged for about 16 hours, then we got married,” Allison says with an infectious laugh. “We wanted to keep her legitimate!” adds Sue, referring to the bundle of joy on her lap.

But domestic bliss is only part of the story. These young parents have careers that require travel. When we spoke, Sue was awaiting visa clearance to fly to Iran for a conference on Persian Gulf security. And at this early stage, when mommy’s away, daddy stays home. “When you’re a bachelor, you’re number one,” Allison says. “When you get in a long-term relationship, you’re number two. Now that the baby’s here, I’m basically number three. I take care of myself, but my priorities have changed, obviously. Every day I’m away is difficult. I was just in Pennsylvania for three days, and when I came back Ruby seemed like a totally different person. I don’t want to miss that.”

Allison grew up in New Haven, Conn., and went to school with Paul Giamatti, of Sideways fame. Now he and Sue own a beautiful, immaculate apartment near New York University (their alma mater). They just bought the neighboring studio apartment as well, and they plan to break through the wall and install a French door. This will make more room not only for Ruby, but also for Clementine, the pet iguana, whose tail alone looks to be a yard long, and who sits safely in a tank under the loft/bedroom.

The renovations don’t stop at home. Allison is a partner in Kush, a Lower East Side bar that’s recently changed locations. The bar had hosted Allison’s weekly trio gigs for nearly three years, but it fell victim to rising rents and closed last June. But a few short blocks to the west of the old place, Allison is involved in the building of Kush 2, at 191 Chrystie St., which will have opened by the time you read this.

Allison is also the artistic director of the Jazz Composers Collective, a nonprofit vehicle he founded in 1992. Together with his cohorts, the bassist has strived to support new music, build audiences and create a more artist-friendly environment for New York jazz musicians. In April he oversaw the fifth annual Jazz Composers Collective Festival, involving a week’s worth of programming at the Jazz Standard club. Allison’s newest project-a quartet with guitar, trumpet, bass and drums-is just getting off the ground. “It’s fewer pieces than I usually use,” he says. “I’m trying to strip it down and see how much sound I can get out of a small group.”

Another of Allison’s creative tools-and another marker of his resourcefulness and initiative-is his audiophile stereo system. He stained his own speaker cabinets, made his own speaker cables and stirred up a batch of his own record cleaner. “I’m also involved in the mixing and mastering of my albums,” such as his 2004 release Buzz (Palmetto). “I’m really into working with the stereo image and how instruments fit on the aural stage. My home stereo allows me to hear subtleties that I might miss with another system.”

Computer-wise, Allison is a Mac fan, with a Pro Tools rig that allows him to do overdubs and other touchups at home. A skilled graphic designer as well, Allison creates his own album art and hires out his talents when time permits-which, right now, isn’t much because he’s bringing up baby. “It forces you to be more efficient with your time,” he says, as his daughter begins chewing on the wood of the stereo preamp.

The Scientist in the Crib by Alison Gopnik et al., What’s Bred in the Bone by Robertson Davies (a novel about the creative implications of art forgery), Myself Among Others by George Wein with Nate Chinen and America (The Book), by the writers of The Daily Show With Jon Stewart.

“I love soul food, and by that I mean anything you don’t have to use a knife to eat. We’re into turkey these days: turkey sausage, turkey chili, using turkey in various ways. We cook about three times a week, and we order in a lot, which is expensive but it’s so easy.”

Allison can talk at length about scotch; he’s partial to Laphroaig. But he also likes to unwind with an India pale ale.

“It’s a big step in a man’s life when he purges his T-shirt collection,” says Allison, whose clothing philosophy is pragmatic. “If I find something I really like but it costs too much, I’ll probably buy it anyway, because I’ll get the next thing at a really great sale or second-hand. I like to match cheap stuff with nicer stuff.”