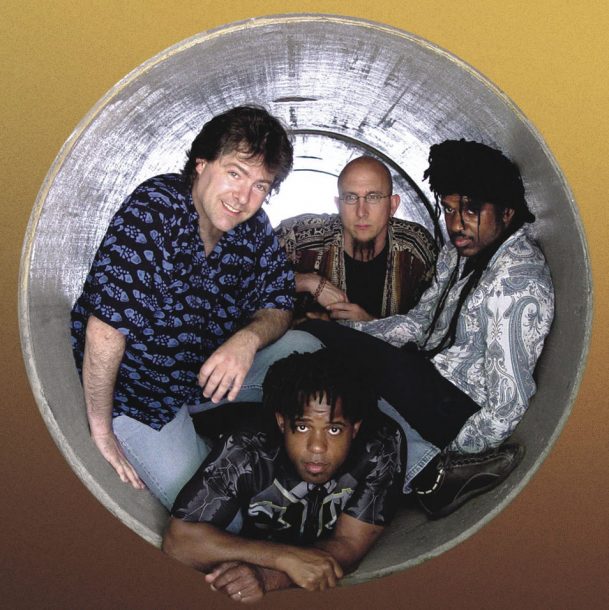 Bela Fleck and the Flecktones

Bela Fleck and the Flecktones didn’t set out to record a three-disc album. As Fleck explains in the liner notes of Little Worlds (Columbia), after a 2001 European tour was canceled in the wake of September 11 the bandmembers found themselves with some extra recording time. So they converted Fleck’s Nashville home into a studio and commenced recording what they thought would be an album featuring just the four of them: banjoist Fleck, electric bassist Victor Wooten, percussionist Future Man and saxophonist Jeff Coffin. But artist friends they wanted to play with kept coming through Nashville, and the recording grew into an expansive, globe-spanning production.

And what a glorious musical excursion this is!

Little Worlds is filled from start to finish with inventive compositions and top-level musicians from around the world, many of whom perform in offbeat combinations. On disc one, the Celtic-tinged “New Math” features Uilleann pipes, theremin and didgeridoo, which provide a mournfully beautiful atmosphere, and Victor Wooten showcases his astounding technique on the percolating “Puffy.” “Ballad of Jed Clampett”-the tune that inspired Fleck to start playing the banjo-is reenvisioned as a hip-hop tune featuring rapper Divinity, with Bobby McFerrin providing quirky background vocals.

Disc two finds members of the Chieftains joining the Flecktones on the lively Irish dance “The Leaning Tower,” while on “What It Is,” Fleck’s banjo performs a perky pas de deux with McFerrin, who’s in all his good-humored, prodigious-ranged, body-slapping glory. “Mudslingers of the Milky Way” is an out-of-this-world jam featuring two theremin players (one who performs the melody, while the other contributes “funky stuff”), and another breathtaking Victor Wooten solo.

On disc three, the jazzy “Snatchin'” is a rhythmically complex number featuring Coffin harmonizing with himself, while “Sleeper” is a sweeping, 12-minute-plus opus combining such disparate elements as tabla, theremin, Irish harp, fiddle-even vocals from a lady Future Man discovered singing in the kitchen of a local Chinese restaurant. The Flecktones close Little Worlds with “The Last Jam,” an upbeat workout featuring (among others) dobro player Jerry Douglas, guitarist Derek Trucks and New York Yankees centerfielder (and accomplished guitarist) Bernie Williams.

In case three CDs of music isn’t enough, Fleck also buries little hidden tracks on the discs, including the comical album opener, a vignette featuring Bernie Williams and comedian Michael McKean in the guise of David St. Hubbins, his character from This Is Spinal Tap. (You have to search backward from the first track to hear it.) They’re stuck in traffic and can’t decide what to listen to on the radio (a baseball game featuring comedian and Spinal Tap alum Harry Shearer as the play-by-play announcer doesn’t make the cut), so they flip stations, with St. Hubbins weighing in on the many styles of music passing by-all of which is performed by the Flecktones.

Simply put, Little Worlds is a superb offering from one of music’s most singular and gifted bands. It is also available in a single-CD version-but the three-disc version is a must.