Skip to content
Become a member and get exclusive access to articles, live sessions and more!
Start Your Free Trial
Home > JT Archives > Before & After with Lou Donaldson 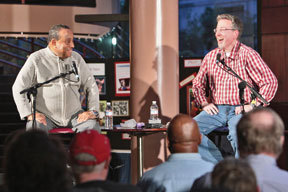 If we’re lucky, Lou Donaldson will write his autobiography. He was not only in the thick of things during the hard-bop, soul-jazz and funky-crossover eras, but the 82-year-old alto saxophonist has stories to tell, a biting sense of humor and, as he showed in front of an audience at this year’s Portland Jazz Festival, he shoots from the hip.

Before: [after two notes of saxophone] That’s Hank Crawford. Beautiful tone, beautiful soul, from Memphis, Tennessee. He came up with me. We met in the ’50s; he was playing with Ray Charles. He wrote arrangements for Ray, too. If you can’t play the blues, you can’t play no jazz, I don’t care who it is or how much you study.

Can you teach someone feeling?

No. But you can put them in a band that plays like that and they pick it up. My father was a preacher and my mother was an organist in the church, so I heard the soul music subconsciously. When I started playing, I would inject some of that in my music.

Yeah, “Misty” is the best record he ever made. One reason is, it was a hit [audience laughter]. And I played it myself so I could see what he put into it. I made a solo on “The Masquerade Is Over” and the critics all rated it the fifth best alto solo ever recorded. I had to go back and learn it, ’cause I’d go to places and I’d play it differently and the people would get angry. A lot of guys used to hum it back to me and say, “You didn’t play that right.” So I had to get the record and go home and memorize it [laughter]. The same thing happened to Moody. He couldn’t remember “Moody’s Mood for Love.” He was drinking wine and everything and he couldn’t remember it and the people wanted to beat him up! He had to go back home and learn the solo.

After: Hank Crawford was one of the greatest of our time. He made his mark.

Before: It’s a nice record. It’s got a nice groove, a nice beat to it. The arrangement’s all right. That’s Pepper Adams. I can tell you that right away. I know these guys because I played with them. I know the way they move over the horn. I studied them a lot too. Pepper was the greatest. I never liked Gerry Mulligan, none of that kind of stuff. Pepper had the feeling and that big heavy sound. [listens to alto player] I don’t know; off-hand I’d say it was Cannonball. Two or three guys played that way. That’s a little behind me. I’m a Charlie Parker man; anything else is just another saxophone player. A lot of people don’t know that Cannonball came to New York after Charlie Parker was dead. If he’d have come while Charlie Parker was living you probably would never have heard of him, ’cause they didn’t push nobody but Charlie Parker. It seems they only push one person, like they do Wynton Marsalis now. In fact, I think nobody would know nothing about jazz except Wynton Marsalis from the way, you know, every time they ask a question they have to get Wynton. So I asked him, “Are you the only one who knows anything about jazz?” Evidently, ’cause every show I see, Wynton Marsalis is on there talking. Half the stuff he doesn’t know what he’s talking about, but he’s talking [audience laughter and applause].

After: Phil Woods sounded like Cannonball, and I’m gonna tell him that when I see him. Phil’s a good friend of mine. He’s one of the few that I really liked. I like him as a man. He did a lot of stuff for integration. He used a lot of soul brothers-he didn’t have to do that. I watch all that kind of stuff. Oliver Nelson was one of the greatest arrangers I’ve ever known. He wrote an album for a guy named Leo Gooden. You never heard of him. He owned a club in East St. Louis, Illinois. He was a racketeer but he wanted to sing so he got Oliver and made Oliver write a whole big-band arrangement for him and he sang it. I got the record. I’m one of the few people that has it. And it’s great. I told Oliver that’s the best you ever did. Leo Gooden weighed about 450 lbs. He owned the Blue Note in East St. Louis, right across the river from St. Louis. St. Louis closed at 1 a.m., and East St. Louis stayed open until 5. I went into his office and he had a carbine, a .38 and a German Luger lying on his desk. I didn’t ask him about money or anything [laughter]. That was a rough town.

Before: I tell you one thing, you can take that off, whoever it is. I don’t even care. That’s got nothing to do with jazz at all. They say he’s searching, but I know what he’s searching for-a saxophone teacher. That’s what he needs.

Have you ever played free?

No, I never played free ’cause I wanted to get paid [laughter]. A lot of people asked me, “Why did you play those funk records?” I said, “Look, man, in the record business the record company will keep you on if you sell some records. If you don’t sell any records, you fired.” I know a lot of great, well, not exactly great but a lot of good musicians who could have sustained a little longer if they’d have just bent, just a little. Not a whole lot, just a little. But they wouldn’t do it so they were unemployed. They’re on welfare.

After: Find a teacher, quick. Learn how to play some blues. Get him some Charlie Parker records. I’m around if he doesn’t understand what I’m saying; he can come anywhere I’m playing and I’ll show him. Fortunately, as old as I am I still can play just about as well as I always did. I might break down tomorrow but today I’m alright.

The rest of this Before & After session appears in the August/September 2009 issue of JazzTimes.