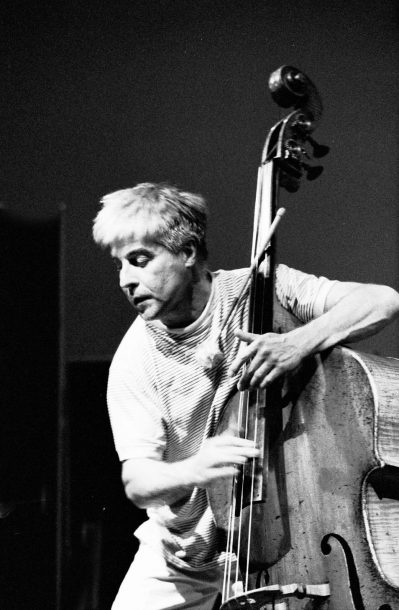 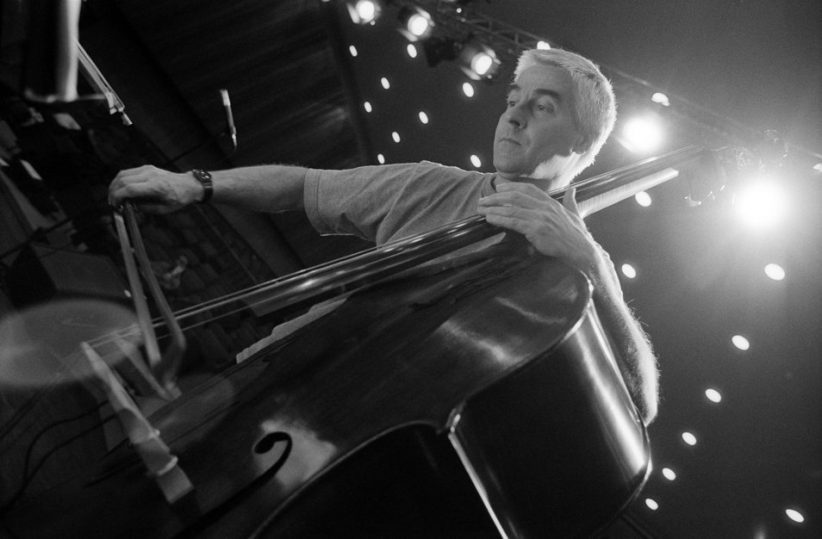 Bassist Barry Guy and violinist Maya Homburger have been moving bit by bit into their new home in County Kilkenny, Ireland, a process protracted by their respective touring schedules. It was only during a recent lull before delving into a series of projects-concerts with conductor John Eliot Gardiner’s Bach Pilgrimage and commissions for Nova Scotia’s Upstream Ensemble and the Munich-based International Composers and Improvisers Forum-that Guy was finally able to retrieve some books from storage. Serendipitously, he came across Elias Canetti’s Crowds and Power; having formed the Barry Guy New Orchestra (BGNO) in 2000, after 28 years at the helm of the groundbreaking London Jazz Composers Orchestra (LJCO), Canetti’s treatise prompted Guy to reevaluate some of the fundamental premises of his work.

“It made me realize that I have a crowd of musicians to contend with,” Guy says of the 10-piece BGNO, which includes such acclaimed improvisers as pianist Marilyn Crispell and saxophonists Evan Parker and Mats Gustafsson. For Guy, rereading Canetti “also brought back the old specter of command and implementation, and fascism and freedom, as it relates to composers and improvisers.” Such issues were front and center in the polemical English improvised music scene of the ’60s and ’70s, when Guy worked with Spontaneous Music Ensemble (SME), Iskra 1903 and pianist Howard Riley’s trio. In a way, Guy’s LJCO recordings for Intakt comprise a Teflonlike argument for the legitimacy of the composer in improvised music, as his works are casebook studies in the integration of improvisation and predetermined materials, and the empowerment of improvisers to substantively shape the work.

Since “it could be said that I am exercising some kind of politically incorrect power over them by writing a score, however loose,” Guy tested the relative freedoms of his scores against the minimally scripted performances of Parker’s Electro-Acoustic Ensemble, of which Guy is a charter member. “Prior to a performance, Evan hands us what I would call a mini-score, which is not much more than a list of events, so we have a clear idea of who comes in where, who goes out where, and where there are crescendos and overlaps,” Guy explains, detailing his longtime colleague’s methods (Guy first played with Parker in a ’67 edition of SME; but, it is through their ongoing trio with percussionist Paul Lytton that the two are most commonly associated). “While the implementation of his score is much less specified, the basic tenet of Evan’s scores and mine are the same: these are the structures to be followed over the course of the performance,” Guy concludes.

“Given that there’s an element of command even in [Butch Morris’] conduction method of using gestures and body movements,” surmises Guy, whose contemporary music compositions have been performed by the ECM-affiliated Hilliard Ensemble and conducted by avant-garde icon-composer Pierre Boulez, “I suppose that the most a composer can do is develop an organic process with an ensemble so that there is a seamlessness between materials the composer brings to the situation, and the language the composer and the ensemble articulate together through improvisation.” That was Guy’s agenda for debuting BGNO in Dublin as part of the 2000 Mostly Modern series at The Bank of Ireland Arts Centre. Over a four-day period, Guy programmed lunchtime and evening concerts featuring BGNO members in solo, duo and trio settings, while holding open afternoon orchestra rehearsals. The culmination was the premiere of Guy’s album-length composition “Inscape-Tableaux” (the Intakt CD of the same name is from a subsequent studio recording).

“I didn’t have to play in every concert, so I was able to listen to the various improvisation-based languages being used within the band, and use the process to build the piece from constituent parts,” Guy relates. “One of the impulses of putting together the band was to bring together acquaintances I’ve made in duo and trio situations-within the band, you have the Parker/Guy/Lytton trio, my trio with Mats Gustafsson and [drummer] Raymond Strid and the trio with Marilyn Crispell and Lytton, which is intense and ongoing,” he explains. “The process of having these concerts and rehearsals together in such a concentrated way caused these various languages we have articulated over the years to converge as we built the piece, which I thought was very apropos of the word ‘Inscape,’ which means an unique inner quality or essence of an object shown in a work of art.”

Almost immediately, Guy confronted the differences between LJCO and BGNO. “There were obvious trade-offs,” Guy explains. “With the LJCO, I had amazing sonorities available in terms of orchestration, and to go down to 10 pieces has given me some headaches in some ways; but, in many respects, the music really takes off in ways and feeds upon its own energy with 10 pieces.” Yet the biggest difference was Guy’s ability to delegate conducting chores among members of BGNO. “Since I want to concentrate on playing the bass as much as possible, I set up strategies so that I don’t end up flailing my arms about all the time,” says Guy, who conducted all but the earliest LJCO recordings. “So, I’m passing some vital things over to the players. In the beginning of “Inscape-Tableaux,” the placement of the brass unisons is determined by the musicians. They get it together on their own. There is one section of the piece where the band is split down the middle-five and five-and Mats directs one half while I direct the other. That’s something I couldn’t have really done with the LJCO. Five and five are manageable numbers in a graphic area.”

For Guy, graphic notation is an important tool for the composer walking the tightrope of empowering musicians while retaining some sort of personal imprint on the composition. Pulling out a book by Scottish painter Alan Davies, whose work he refers to in his graphic pieces, Guy quotes, “‘I work with the conviction that art is something basically natural, an activity motivated by a faith in the actuality of existence, which is outside and beyond knowing.’ For me,” Guy continues, “that sums up quite a lot of what I’m trying to get at. There’s the conviction of actually doing it, that it is natural, and that it is out of my control beyond a certain point.” Guy acknowledges that it is the composer’s role to catalyze music into that otherness to which Davies refers, but only if there is “a real chemistry within an ensemble. I must say that chemistry is not just this magical spark; it is the ability to solve problems, because there are always a number of predictable and unpredictable problems that arise in creating a piece like “Inscape-Tableaux.” That’s what I like about this band-they go beyond the score and make things happen. They take the parts I write to that otherness, that newness. That is how the power is shared more evenly, I think.”

Usually, the phrase “collective statement” is applied to music, which has no clear compositional guidelines. Yet “Inscape-Tableaux” is a thoroughly collective statement, despite being liberally peppered with the compositional signatures Guy has employed since LJCO’s landmark 1972 recording, Ode (Intakt)-intrusions of advanced jazz-informed, jabbing staccato figures, wisps of bluesiness and glints of English pastoral lyricism. These materials do not function, however, as a static superstructure, but as flexible vertebrae, moving with the unfolding of improvisation-based events. Subsequently, each member of BGNO-including trumpeter Herb Robertson, trombonist Johannes Bauer, tuba player Per-?…ke Holmlander and reed player Hans Koch-repeatedly shapes the piece.

Guy’s bass is heard to much better effect on Inscape-Tableaux than on LJCO’s discs; not only did the dual chores of conducting and playing limit his options, but there was also one or two other bassists of the caliber of Dave Holland and Barre Phillips on the gig. Throughout the program, Guy’s lightning runs, surreal bursts of textures (which are often achieved through means that have to be seen to be believed) and time-stopping glimpses of beauty, confirm his complete command of the instrument and his status as a starkly original artist. Still, the full range of Guy’s bass playing cannot be comprehensively conveyed through a single recording, which makes the imminent release of the Guy/Crispell/Lytton trio’s Odyssey (Intakt) all the more timely. Longtime listeners will savor their reworkings of such LJCO works as “Harmos” and “Double Trouble II” as well as compare their reading of Guy’s lovely ballad “Odyssey,” which is woven into “Inscape-Tableaux.”

“It’s very intriguing, the way Marilyn, Paul, and I work as a trio,” Guy reflects. “There’s something very special about the way Marilyn voices the piano. Marilyn likes to work harmonically and motivically, with a lot of long scale development. She builds lines that can really take your head off with their complexities, and then do something very delicate.” Guy also likes the interaction between Crispell and Lytton, a percussionist who “can play tiny little sounds for what seems to be ages and then suddenly roar. You can never be quite sure of what he’s thinking. Both Marilyn and Paul have the capacity for creating these really dramatic contrasts, which is something I have been very involved with in both my writing for LJCO and BGNO.”

“For this album, I didn’t want to do the obvious thing-have a head, do the improvisations, and go back to the head again,” Guy continues. “On the piece I originally wrote for LJCO-‘Harmos’-we began to improvise with the goal of reaching the tune, but not knowing exactly how we’d get there. I like the idea of reaching a moment where it seems to be the right decision to move into the tune.” For Guy, this method “introduces a certain mystery, because nobody knows when exactly it will happen. It’s a more organic process than everybody nodding his or her head at the same time to go into the tune. It’s feathered, which is a quality I tried to give the tunes themselves, to sound improvisational. Marilyn is wonderful at this, making it seamless when she goes from a song to an improvisation, or back again. I think the reason she can do this, and all of the other amazing things she does, is that whatever her soul is telling her, she lets it out.”

As for his own approach, Guy acknowledges that “compared to the early days with Howard, there’s a world of difference in what I’m doing with the instrument. Old age has given me some understanding. I’m more expressive, the chops are better, the fluency is better and I’ve opened up the coloration.” Guy credits his new five-string bass, which “has opened up a new dimension to my playing. It’s so resonant that it invites you to play a hanging note, and it’s good with the bow as well. Having this new instrument is one of those moments in life where a door opens up and you go, ‘Wow!'”