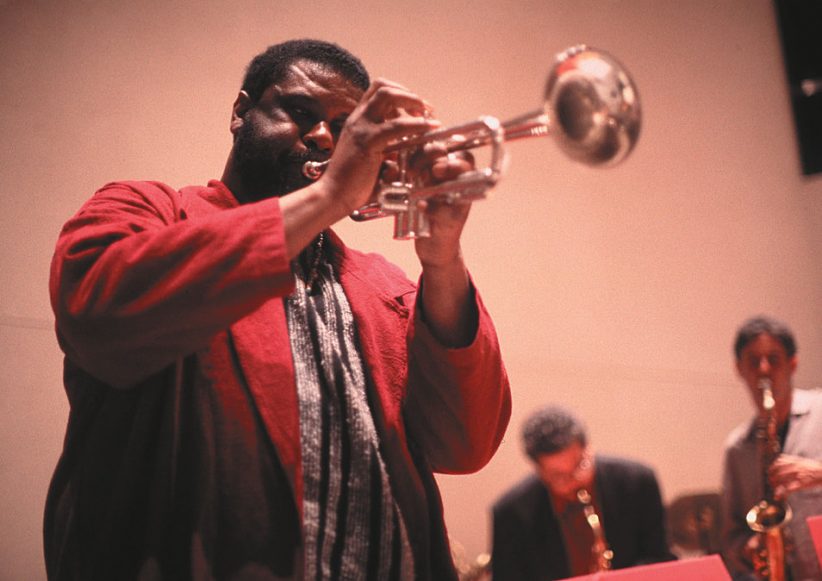 “The essence of what we do is improvisation,” says trumpeter Baikida Carroll of jazz musicians. “That means you’re supposed to be making stuff up every night. To constantly do that throughout the years you have to bring in new elements, new sources to pull from, setting yourself up in different environments to test your mettle, to see how you respond to particular situations. So I try to write situations that will bring things out of the improvisers.” Marionettes on a High Wire (OmniTone), the superb new album by the St. Louis native and former member of the Black Artist Group (BAG), delivers a case-in-point manifestation of these points with a deceptive simplicity.

With the aid of his excellent working quintet-pianist Adegoke Steve Colson, bassist Michael Formanek, tenor saxophonist Erica Lindsay and drummer Pheeroan akLaff-Carroll sketches out beautifully lyric themes with sensitive arrangements, but as pretty as the melodies are and as swinging as the performance of these 10 originals gets, there’s a well-hidden complexity to the material.

“One of the things I do is take an element of familiarity, but then make it slightly askew,” he says. Although the album’s shimmering postbop veneer brings to mind the intuitive beauty of the famous Miles Davis Quintet with Wayne Shorter and Herbie Hancock, there’s a trickiness to the writing-the play of two distinct rhythmic patterns on the piano in the title track, for example-that forces the musicians to act quickly and avoid stock licks and predictable directions. “That’s what keeps you going,” says Carroll of encountering such challenges. “Otherwise you’re playing the same scales, the same chords, the same sequences, the same phrases.”

Carroll’s entire four-decade career has been marked by such artistically enriching detours-some deliberate, some not. As a member of BAG, the St. Louis analog to Chicago’s AACM that produced players like Oliver Lake, Julius Hemphill and Charles Bobo Shaw, Carroll honed an expansive vision of the music that left few stylistic stones unturned and kept control of the music strictly within his own hands. It was a practice he retained when he moved to New York with most of his cohorts in the mid-’70s.

Over the years Carroll built a career for himself, sporadically making records but performing frequently. Things had been going exceptionally well for him when he was suddenly stricken with Bell’s palsy-a nerve condition that causes facial muscles to weaken or become paralyzed-in 1987.

“I was sitting there about to play and I couldn’t do it,” he recalls. “First I thought I hadn’t warmed-up properly, but within a half an hour I couldn’t play a note on my instrument.” Doctors told him that he would get his feeling back in a week, but a year later his face was still numb. So he began a grueling three-year process of rebuilding his embouchure. “I would just put the horn to my mouth even though it wouldn’t make a sound. After a while I got this buzz, little flutter tones, and I started from there, doing it all day. Long tones up the wazoo. Gradually I built it back up to where I am now. It was a nightmare.”

To survive this four-year absence from playing Carroll relied on his contacts in New York’s theater community, which he first made back in the ’70s amid a flurry of multidisciplinary experiments, to make a living by writing music for the stage. Although he still views his writing for theater, film and dance as ancillary to his main work, he appreciates what he’s learned from it. “I like writing for other genres because it forces you to research things you don’t know, so you’re constantly studying,” he says. “If you don’t constantly study, you don’t grow, and if you don’t grow in improvisational music then you’re not actually improvising. If you study anything it always leads to the next step. You never say, ‘I’ve learned that.’ Once you’ve said that you’re dead.”