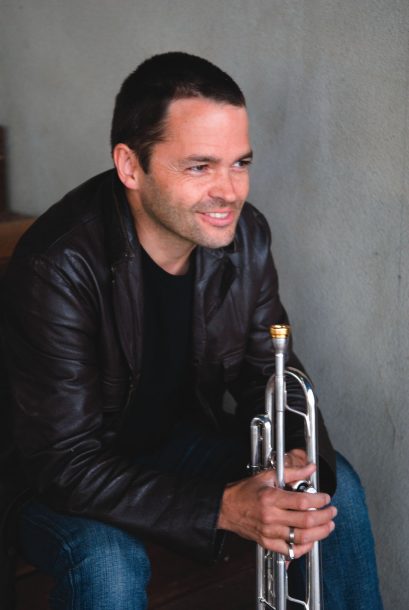 The sun had just gone down when Arve Henriksen ducked into a coffee shop. “It’s freezing cold in Oslo now,” the Norwegian trumpeter said, laughing. “It’s quite nice, actually, the winter here.” Accompanying him on this mid-February evening was his girlfriend, Trio Mediaeval’s Anna Maria Friman, who makes several appearances on Cartography, Henriksen’s latest full-length and his first as a leader for the ECM label. One of the tracks on which the Grammy-nominated chanteuse can be heard is “Recording Angel,” a moody, post-Miles number that includes a sample of a Trio Mediaeval soundcheck. The performance, recorded by Cartography’s co-producer Jan Bang, is used as the foundation for one of Henriksen’s sparse improvisations.

“This shows the ongoing process while we were working on this record,” Henriksen said of Bang’s tendency to create songs out of a variety of audio sources. “Jan did it and brought it into the session when we were in the studio.” Bang, who co-produced Henriksen’s 2004 release Chiaroscuro and worked on trumpeter Jon Hassell’s new album Last night the moon came dropping its clothes in the street, also provided the spark that got the record off the ground. “The process started about two-and-a-half, three years ago, [with] Jan Bang bringing in some sketches,” Henriksen said. “We had been working together for a long time and he would just occasionally bring in some new ideas.”

In addition to Bang’s electronic blueprints and two live tracks recorded at the Norwegian Punkt festival, Cartography also features “Before and Afterlife,” a spoken word and trumpet piece that was conceived, in part, by David Sylvian. The British singer-songwriter first collaborated with Henriksen on Snow Borne Sorrow, a 2005 full-length by Sylvian’s group Nine Horses, and then asked the trumpeter to contribute to a 2006 installation piece called When Loud Weather Buffeted Naoshima. “When we were working [on Cartography], I remembered he also sent me a file for this art magazine thing,” Henriksen said. “And he asked if he could use some of my trumpet phrases on a new song that he was making. … That’s the second track on the new record.”

If this patchwork doesn’t exactly suggest the usual ECM production-that is, a Rudy Van Gelder-style session helmed by Manfred Eicher-that’s because Cartography was completed before Henriksen knew who would release it. “Jan had a recording session in France together with Jon Hassell,” Henriksen said when asked how the album ended up on the long-running German label. “So Jan just mentioned this [to] Manfred and he wanted to listen to it and liked it … and wanted to release it. But the process before that had been … to release it, actually, on another label: the Rune Grammofon label.”

It’s hard to say which would’ve been a better fit. The genre-defying Norwegian indie released Henriksen’s first three albums-Chiaroscuro, 2001’s Sakuteiki and 2007’s Strjon-as well as the entire output of his jazz-rock outfit Supersilent. But ECM has a long history of supporting Norwegian artists who take unorthodox approaches to improvisation. Henriksen sees himself as a part of this tradition. “Jan, of course, and [co-producer] Erik [Honoré] and myself, we are very fond of sounds,” he said. “That’s mainly the approach in many of my projects-also Supersilent. And that goes for many of my colleagues in different bands here in Norway. We’re fond of the classical music, fond of the medieval music, fond of most different kinds. We just want to bring it in and see what can be achieved, musically, by doing that.”

Henriksen’s liberal outlook might put him at odds with the core American jazz audience, which, thanks to ECM, will have a much easier time finding Cartography than the trumpeter’s previous records. But, truth be told, he doesn’t see himself in an American light. “The Norwegian jazz scene has always been sort of a melting point of many different things,” he said. “And you have to look at the Norwegian scene with some sort of European eyes, because it’s not American jazz.” In other words, don’t expect a Wynton Marsalis record-or even the kind of music that Miles Davis was making in the ’70s. Cartography is much closer to Davis in spirit than in sound, as evidenced by Henriksen’s eagerness to work with Bang and Honoré, producers who attracted him because of their experience with radio-friendly forms.

“They have been working with a lot of pop artists here in Norway,” Henriksen said of the pair. “That’s the reason I chose them to produce it, because it would give me a glimpse of another world.” Interestingly enough, the collaboration resulted in one of his least otherworldly recordings. Henriksen eschews the heavy processing of Strjon and Supersilent’s recordings, opting instead for the simple sound of trumpet played over rhythms that are almost subliminally soft. “It was the work of Erik and Jan,” he said, in typical humble fashion. “They have maybe managed to make me play less notes and more simple, maybe. And hopefully this is a stronger output from my trumpet playing.”