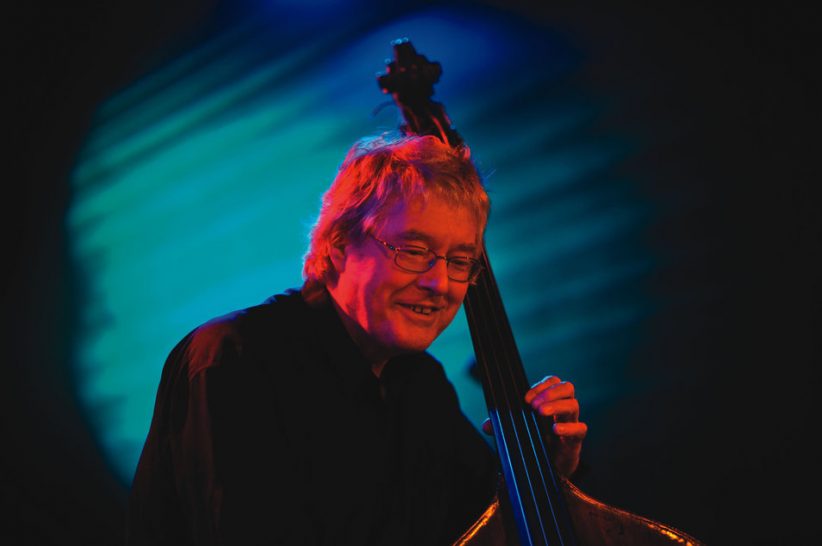 On Arild Andersen’s new ECM album, Live at Belleville, Tommy Smith’s tenor saxophone rasps and brays and lunges over intervals and keens toward madness. Andersen’s bass enters and hammers nails into the music. Drummer Paolo Vinaccia randomly erupts, scattering curses. Then the three settle into time and fly, Smith’s blistering runs converging to long hoarse cries. The sound, like the music, is raw.

Aren’t ECM recordings supposed to be moody and ethereal, with crystalline, transparent sonic quality? Whatever happened to the cool, austere “Nordic jazz sensibility”? Is there really such a thing as an “ECM sound”?

“I think I’ve always been in between some kind of energy type playing, and more spacey stuff,” says Andersen, speaking by phone from his home in Oslo, Norway. It is morning on the West Coast of the United States, but late afternoon in Oslo, “completely dark and snowing.” Andersen has just returned from Paris, where he received the Prix du Musicien Européen 2008, from the Académie du Jazz.

He continues: “I like to burn. But sometimes it’s difficult to catch that feeling in the studio. On my live albums, like Molde Concert and Belleville, you can hear what I sound like live: high energy. But my studio albums have been more held back, in a sense. It’s like the difference between what you want to hear at a Friday night hang in a club, and what you like to listen to at home-maybe on a Monday morning.” Those “held back” ECM studio albums include Hyperborean, from 1997, which just whispers, Andersen’s bass meditating over the somber, subtle backgrounds of a classical string quartet. There is also Electra, from 2005, the kind of project few jazz labels would undertake: 18 composed scenes of theater music for Sophocles’ tragedy, employing six instruments and a four-voice choir.

Even Live at Belleville often subsides into quietude. The album is mostly taken up with “Independency,” a sweeping, diverse suite in four parts, commissioned by an agency of the Norwegian government to mark the centenary of Norway’s liberation from the union with Sweden. Hardly the subject matter for a blowing session.

Andersen is not as famous as some ECM artists like Keith Jarrett and Jan Garbarek, but there is no musician more closely identified with the label. He played on the very first ECM recording session in 1970 (for Garbarek’s Afric Pepperbird). Since 1975, he has released 18 ECM albums as leader or co-leader, and has been a sideman on many others.

You can dip into this voluminous discography almost anywhere and become convinced that Andersen is among the great living bassists. He is deeply, poetically expressive as a soloist. His warm, looming sound, combined with his sense of dramatic timing, communicates nuances of emotion beyond the reach of mere horns. And he is a demon in a rhythm section. But “bassist” is a very incomplete job description. He is also a bandleader, a composer/arranger, a conceptualist behind ambitious projects, and a pioneer in the use of electronics in acoustic jazz. He sustained (for a decade) one of the seminal Norwegian small jazz ensembles (Masqualero), was among the first to bring Norwegian folk forms into jazz, collaborated with major guitarists like Bill Frisell and Ralph Towner and Terje Rypdal, and co-led a groundbreaking piano trio with Greek classical pianist Vassilis Tsabropoulos.

Not surprisingly, the project that Andersen is most excited about is his current one, the trio with Scotsman Tommy Smith and Italian Paolo Vinaccia. He says, “This trio is my ideal band, a band that doesn’t need a bass player. Sometimes I can comp the saxophone. On some songs I can just lay out. I can come in wherever I want. The energy is moving around. We can build a saxophone solo to go up, up, up, and all of a sudden we take a left turn and it’s very quiet. The feeling of three equally balanced musicians is very important for me, and with this trio I think I’ve finally found it. Also, without keyboards or guitar, I can use my electronics more freely.”

Those electronics include a Boss octave pedal, a Gibson Echoplex Pro, and a TC Electronics M2000 reverb unit. On Live at Belleville, Andersen uses them to multiply three instruments into occasional orchestras. Three tracks come from the first gig that Smith and Vinaccia ever played together, and were recorded (on a soundboard tape) without Andersen’s prior knowledge. In Europe, the album appeared on many “Best of 2008” lists.

Like virtually every European jazz artist of his generation, Andersen says that his course was set by his early exposure to American musicians. “When I came up in the ’60s, there were no jazz schools in Norway. In Scandinavia, I had a chance to play with people like George Russell and Don Cherry. Dexter Gordon and Art Farmer also spent time here. Then I visited New York in the early ’70s and played with Sam Rivers and Paul Bley. To play with these masters, learning how they phrased, feeling their time, that was my school. It shaped the music I’ve been doing all my life.”

But while Americans got him started, Andersen’s career has been as Euro-centric as that of any jazz musician of his stature. He has recorded almost exclusively with Europeans. It has been largely a practical matter: “Living in Norway, I have needed to pick people to play on my records who could go on tour.” Some he “picked,” like Jon Christensen and Nils Petter Molvær, have gone on to international reputations. More, like Tore Brunborg and Eivind Aarset and Bendik Hofseth, remain almost entirely unknown in the United States. To discover the creative strength of these players through Andersen’s recordings is to realize that there is now a fully independent jazz scene in Europe. Andersen himself has rarely played in the United States, and never since the early 1990s.

To immerse oneself in Andersen’s ECM discography, with its variations of mood and its huge swings in dynamic range, is to once again encounter the question: Is it meaningful to speak of an “ECM sound”? Andersen thinks so. He believes that what gives the ECM catalog its unity is the fact that “Manfred Eicher is not a producer, he is an artist, and when he is in the studio, you listen to him. Manfred’s approach to music is that feeling you get on ECM records.”

Andersen also has some ideas about what critics like to call “the Nordic sensibility” in jazz. He says, “When I was in New York, playing with Sam Rivers and Barry Altschul, I was really into that free, fast-moving, ‘streets of New York’ type of sound. Coming back to Norway, the music reflects a bit of the life here, the nature.” He also speculates, “Another difference with northern, or Scandinavian, jazz, may be the idea of sharing. I find American jazz more of a hierarchy, in the sense of a bandleader with sidemen, or a soloist with a rhythm section. Here we share everything: the money, the solos, the good food, the bad wine, whatever: We share it.”

Andersen will turn 64 this year, and is busier than ever. From the beginning of October until mid-December 2008, he played 40 concerts, half in Norway, half in other European destinations. “It’s challenging,” he says, “when you are not on tour but have to fly to almost every concert.” He is able, “90 percent of the time,” to bring his “real bass,” a German instrument from the late 1800s. An Accord carbon-fiber bass case (“only 14 kilo”) has been a valuable recent acquisition. When the plane is too small, he brings a Yamaha SLB200 electric bass, on which he has changed out the pickup for his preferred Danish Wilson. He says, “I have to check out what kind of aircraft is flying. It’s not so much the flying time or the price but can I get the bass on?”

His projects may be erudite, like his rarefied ruminations on Sophocles. He may pursue the most sophisticated organic relationships between composition and go-for-broke improvisation, as on Live at Belleville. He may use electronics to introduce cold north winds into the open vistas of his music, like on Electra. But Andersen is refreshingly down to earth. When asked which takes more of his time, composing or practicing the bass, he does not hesitate: “Sending e-mails and booking flight tickets.”