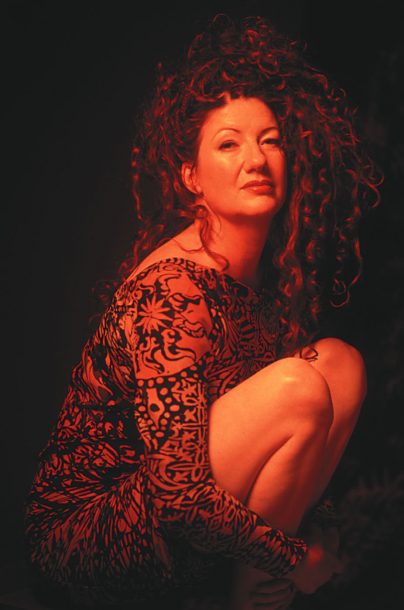 Ann Dyer has just flown back from her second sojourn to India and, boy, are her arms-and legs and brain-tired. For three weeks, the San Francisco jazz vocalist meditated on the matters of music and yoga in Rishikesh-a tranquil town that rests on the Ganges River at the foot of the Himalayas-and the current collision of night-and-day worlds has left her downright pooped. And yes, this is the same Rishikesh the Beatles made famous during their spirituality-seeking days.

Although the Fab Four is not the reason for her trek-she credits “the purity” of Miles Davis for getting her into Eastern music-her second studio album, Revolver: A New Spin,(Premonition) is an utterly intriguing, India-fied interpretation of the Beatles classic.

Dyer was only five years old when she heard her first Beatles album, Meet the Beatles, and the love affair lasted. In December 1997, after crooning a considerably depressed “I’m Not Sleeping” at various shows, she and her backup band, No Good Time Fairies, performed an entire live gig based on the original Revolver. Soon after, Dyer, her mates and producer Brian Bacchus recorded the set in a studio.

With its hearty stew of jangling guitars, bleating saxophones and Middle Eastern tablas, the CD is hard to categorize-but so is Dyer. While earning an undergraduate degree in dance at Mills College, Dyer learned that she could belt a tune pretty well, too. “My sound is a reflection of my dance background,” she says. “I frequently read the words viscerally. I try to sing with my entire body.”

Combine that awareness with a tender, rich vocal that can explode into a seemingly shapeless Hindustani wail and what you have is a Bay Area phenom.

“This recording is as close to a live process as you can get,” Dyer says, stifling a yawn. “We aim for a pretty loose structure. I don’t know exactly where we’re going-but no one else does, either. I like it that way.”