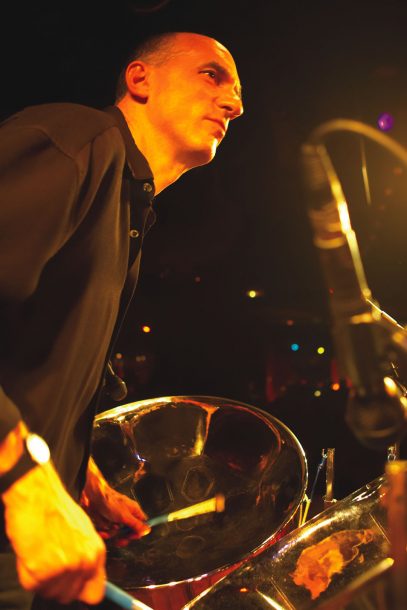 Andy Narell is a master of collaboration who has turned virtuosity on the steel drums into an international musical passport. But when it came to creating his most ambitious recording yet, Narell decided to go it alone. Tatoom, his new album on Heads Up, features his compositions for steel orchestra, and while Mike Stern and David Sanchez appear as special guests, Narell plays almost all the pan parts himself, creating a lush, shimmering, orchestral sound by meticulously overdubbing on five steel-pan registers, from tenor to bass.

A big steel band in Trinidad and Tobago, where the steel pan is the national instrument, often features eight registers, much as the string section in a symphony orchestra is made up of violins, violas and cellos. But in creating the extended pieces on Tatoom, Narell couldn’t merely layer tracks with the same instrument. Instead, Narell recorded on multiple instruments in each register, playing drums crafted by Dr. Ellie Mannette, a longtime family friend and mentor to Narell who helped invent the steel drum in the 1940s, transforming gleaming pans made from 55-gallon oil barrels into highly refined musical vehicles.

“If I had one of each register and said I’m going to overdub one instrument over and over, it wouldn’t work,” Narell said in a phone conversation from West Virginia, where he was participating in a weeklong seminar led by the Trinidad-born Mannette. “The tighter you play the worse you sound. You just get phase problems. The bigness comes from overdubbing multiple instruments on the same part. There’s no other way to make it sound like an orchestra. Each instrument has its own color and set of harmonics. Every note of every instrument is unique. Like a string orchestra, the bigness comes from the inaccuracy, the fact that every instrument, bow and string has a different timbre.”

Tatoom is just the latest in a career filled with unlikely and unprecedented accomplishments. Hailed in Trinidad for his compositional prowess writing for steel orchestra, the New York City-born Narell is a pop star in South Africa, where he set a record for the most extensive tour ever by a foreign musician (a project documented on his 2001 Heads Up double-CD Live in South Africa). An expert improviser, Narell has performed around the world as a founder of the Caribbean Jazz Project with Cuban reed maestro Paquito D’Rivera and vibraphonist Dave Samuels.

Since leaving his longtime home in Berkeley and settling in Paris several years ago, Narell has joined forces with three of the most revered musicians from the French Caribbean in a cooperative band called Sakésho (pronounced sah-KAY-show, which means “it’s gonna be hot” in Creole). Playing joyous, buoyant music that combines lush jazz harmonies, Afro-Cuban montunos, reggae and traditional styles from Martinique and Guadeloupe such as bèlè, gwoka and beguine, the quartet has released two captivating albums for Heads Up, most recently 2005’s We Want You to Say….

“Sakésho is a very creative environment for me,” Narell said. “We all write music and arrange the music together. In many ways this is what I’ve been looking for. I would often find guys who had a jazz background and an interest in Caribbean music. Now I’ve hooked up with some guys who came from it the other way. They grew up in the Caribbean, with a real deep knowledge of their music, but they went out and studied jazz and all the African music.”

Narell discovered the vibrant culture of the French Caribbean when his music became popular there in the late 1980s and he started performing on the islands of Martinique and Guadeloupe. That’s where he became friends with Martiniquan bassist Michel Alibo, a major figure on the Paris scene widely credited with introducing slap-style bass to African music. Along with Ivory Coast-born drummer Paco Sery, he was a founding member of Sixun, Europe’s leading fusion band, though he’s probably best known for recording with African superstars such as Salif Keita, Youssou N’Dour, Cheb Mami and Angélique Kidjo.

Alibo worked frequently with fellow Martiniquan Mario Canonge, a superlative pianist steeped in jazz and Caribbean music. And they often performed with the Guadeloupe-raised drummer Jean-Philippe Fanfant, a tremendously gifted player who hails from a respected musical family. His three-year gig as the drummer on Nouvelle Star, the French version of American Idol, has turned Fanfant into a Parisian public figure, though he’s long been recognized by his musical peers as one of the city’s consummate session players, equally at home backing Brazilian jazz diva Tania Maria or Beninese spitfire Kidjo.

For Narell, discovering the trio of Alibo, Canonge and Fanfant helped pave the way for his move to Paris. He wrote three tunes for them that ended up on his 2000 Heads Up album Fire in the Engine Room, a project that fueled his passion for the music of Martinique and Guadeloupe. Thrilled by the trio’s bandstand chemistry, Narell knew he wanted to pursue a musical relationship with them, and he got the chance when Canonge called and invited him to play some gigs in Paris in 2001.

“I realized there’s a whole scene there that’s very African and Caribbean dominated,” Narell said. “And these cats were at the center of it. They’d been playing together a long time in various situations, and had a really deep knowledge of music from their countries as well as everything else.”

Compared to Jamaica’s reggae, Trinidad’s calypso and Cuba’s rumba, son and timba, styles like Martinique’s bèlè and danmye and Guadeloupe’s gwoka are largely unknown outside the region. Based on traditional African rhythms, in some cases taken directly from drum patterns of Guinea and Congo that date back to the 17th century, the roots music spawned more contemporary forms like beguine, which was particularly popular in 1930s Paris, and zouk, the dance music that can be heard across the French Caribbean today. With musicians moving back and forth from the islands to France, Guadeloupe and Martinique’s already porous music scenes are constantly absorbing new sounds.

“Each of those islands has about 400,000 people, and for a such a small place they have a very rich culture of their own,” Narell said. “They also get a lot from the outside. The culture down there is very open, and they listen to everything.”