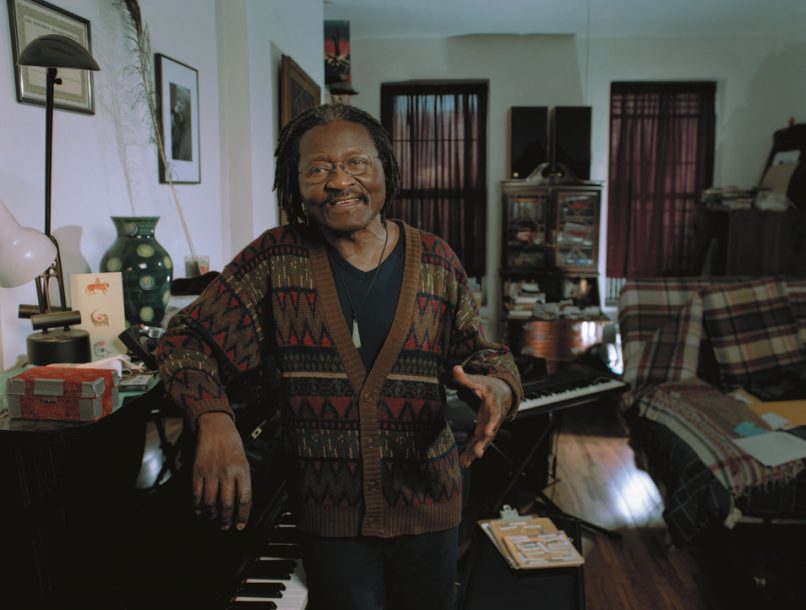 When Andy Bey first shaved his head in 1973, it was for a part in a play called Holy Moses. “I was playing a bigger-than-life figure,” he says, hesitating for a moment. “I was supposed to be playing God, believe it or not.” Now Bey has traded his signature bald pate for a blanket of dreadlocks. “I thought it would be healthier for me to have hair. A lot of people thought I couldn’t grow hair. I wasn’t sure I wanted locks, because I didn’t know if I wanted to deal with all the maintenance. You oil it once a week and wash it from time to time. I put a cap on each night. I plan to let it keep growing. Even if I cut it, I’m not going to go bald anymore.”

We are sitting in Bey’s studio apartment on the western edge of Manhattan’s Chelsea district, where he has lived for the last 13 years. Originally from Newark, N.J., Bey knew the Shorter brothers-Wayne and Alan-when they were both teenagers. (Bey was about 11.) He moved to New York, “where the action is,” in 1970, spending time in the Bronx, the East Village and the Upper West Side before settling into his current abode.

The place is purely functional: there’s a futon bed, an ironing board, assorted pieces of furniture and luggage and an upright piano with a handful of spiral music notebooks nearby. In the next room is a kitchenette, in some disarray. Hanging on the wall, there is a document proclaiming February 10, 2001, to be “Andy Bey Day” in the city of New Orleans.

Bey is openly gay and HIV-positive and in relatively good health, though he’s candid about his limitations. “My problem is the energy, having the energy to take care of my place. I try to take the garbage out, dust, wash the dishes, do what I can do. In fact, I just took out two tons of stuff before you got here.” He cites yoga and a strict vegetarian diet as crucial to his continued vitality as a performer.

At 64, Bey is perhaps more in-demand now than ever before. He came on the scene in the mid-’50s, accompanied by the Bey Sisters, Geraldine and Salome (just two of his seven sisters, in fact). In the ensuing decades he performed and recorded extensively with Gary Bartz and Horace Silver and issued his own Experience and Judgment in 1974. These efforts featured what Bey calls his “power singing,” in contrast to the more intimate “soft palate” singing heard on his latest recordings: Ballads, Blues & Bey, Shades of Bey, Tuesdays in Chinatown and the brand-new Savoy outing American Song.

Still, one can hear traces of Bey’s R&B-tinged “power” voice on tunes like “Satin Doll” and “Caravan,” both from the new album. “I have that other option, to sing with that kind of strong forte,” he says. “My main thing is the basic baritone, breathy. The power thing is just optional, singing beyond my range. I can sing tenor notes but I can’t sing them the way a tenor sings them.”

Bey has collaborated recently with singer-songwriter Beth Nielsen Chapman, saxophonist Michael Hashim (on an all-Strayhorn concert program) and trumpeter/composer Dave Douglas, whose poetry-inspired “Word” project premiered at the Village Vanguard in October 2003. “I’ve known Dave since 1987, when we did a tour with Horace Silver,” Bey says. With Douglas’ group, Bey departs sharply from the Songbook, singing verse by the likes of Adrienne Rich, Gwendolyn Brooks and Basho.

Bey seems thankful for his newfound and well-deserved popularity. He’s also a bit road-weary, but more than willing to live the life of a performer, even with the added challenge of keeping disease at bay. There’s a note of optimism in his musings: “If anything, I’m more consciously aware that you have to take care.”

“My late sister, Sadie, bless her heart, she got me involved in yoga in the 1970s. I’d been doing it off and on, but I have to do it every day now. It’s very beneficial. It’s like internal healing. I do something every morning, and I’ve had to create a system of doing it on the road, keeping my sinuses open to sing, so I do a little routine on the bed. I do some breathing exercises too. The road can be treacherous. You have to sing in all kinds of situations. You have to be fit, because singing is very physical.”

Bey gave up red meat in 1972. “I was eating fish and chicken but, I’ve stopped that in the last two or three years. I go to Healthy Chelsea to buy vitamins, and they always give me soups to take home. I put them in my freezer. I cook some basic stuff like brown rice and vegetables or beans or tofu dishes. I go to a place called Vegetarian’s Paradise; they have very good food. I eat a lot of fruit, and I take a lot of supplements as well. I have a juicer, but I haven’t had time to juice, so I go to the health food store and get wheat grass or grain juices, or I take wheat grass tablets or spirulina or chlorophyll, because you need a lot of green. I also buy this stuff called Green Magma, which is great in some orange juice or water, when you can’t get wheat grass on the road.”

“I like reading stuff based on philosophy, metaphysical stuff and also autobiographies. Right now I’m finishing Jimmy Scott’s biography by David Ritz, who wrote my liner notes. I’ve read his Marvin Gaye book, and Aretha’s book-she mentions me in her autobiography, because I knew her from 1960, before ‘Respect’ and all those things.”