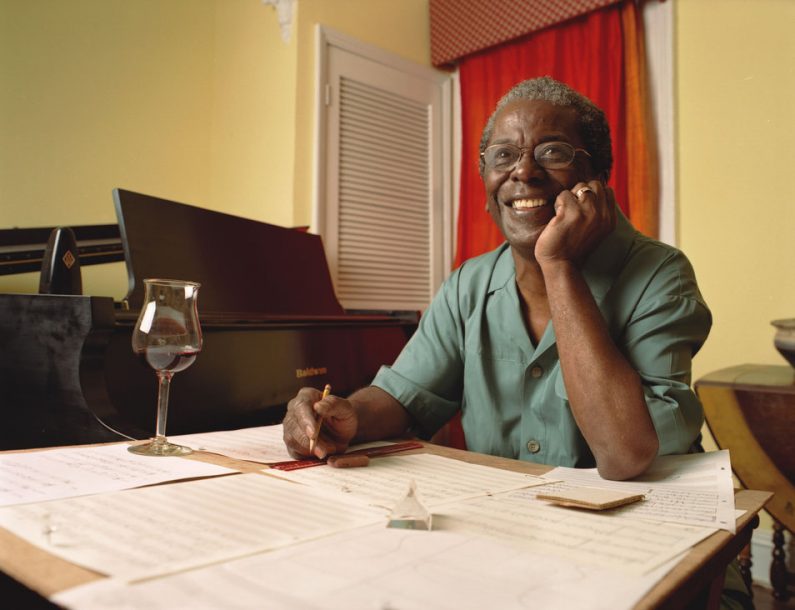 Outside pianist Andrew Hill’s four-story house, on a tree-lined street in Jersey City, N.J., you can hear the hum of Manhattan through the Holland Tunnel, the patter of squirrels and, for two or three hours a day, the keyboardist running scales-before and after he runs miles.

“I have to have some exercise,” smirks the 65-year-old pianist, whose dedication to shape brings pause from practicing to catch fresh air and tone the triceps. “I go to the gym twice a day, at least. It’s just a few blocks away. I don’t stay for hours and hours, but going to the gym can energize you. I’m glad I’m able to do it.”

“The gym keeps him busy,” jokes Joanne Robinson Hill, Andrew’s wife of more than 10 years and current director of education at Manhattan’s Joyce Theater. “Walking to the gym is one of his rituals. So is cooking. I don’t know if he thinks of himself as a gourmet cook, but in the summertime, Andrew will barbeque at the drop of a hat. He’ll think nothing of doing some barbeque chicken or barbeque ribs. When we were in Oregon, we’d hold an open house at least once a year and spend the entire night beforehand in the kitchen. Andrew would cook a big pot of vegetables and I’d be the one to bake.”

“I like everything,” the pianist admits. “To taste the delights of the world is to live. But I gain so much weight for my size that I should probably just live at the gym. My favorite food for the next few weeks should probably be the Atkins diet, so I can lose a few of these pounds.”

If Andrew is the chef, Joanne is the decorator. A divination bowl sits a few feet from their front door in a symbolically decorated living room, with a lizard spitting a snake from its mouth. “Each of these objects represents something, but I couldn’t tell you what,” Hill admits, as he stands in front of a backdrop of wooden Yoruba masks, mirror-embroidered pillows from Pakistan and a silk Ikat from Bali. “They are all significant, but my wife could tell you more. The vision’s all hers!”

Perhaps, but the Jazzpar Prize is all Andrew’s. The prestigious award will be presented in Copenhagen, Denmark, on April 27, 2003, but it’s just another accolade in Hill’s varied musical life, which has included being a professor in Portland, Or. (where he met and married Joanne), and a music therapist in a California prison. “One of the last times I went to Soledad North-a medium security prison-I walked to my shop at the back of the building, and someone told me, ‘You better not go in there today.’ That was my last day there.”

From his childhood days in Chicago to his days as a bandmate to inmates, Hill sees music as an open-ended art. “All music is valid. Good music is good music, and in the search for new material, everything comes into mind. I keep my ears open right here in this kitchen-but more so than my ears, my mind.”

Hill keeps chords open too, creating space for harmonic possibilities that John Coltrane, Sonny Rollins, Lee Morgan and others have responded imaginatively to over the years. Hill’s knack for quoting “Chopsticks” in sophisticated solos and labyrinthine lines, in part, makes him known as Alfred Lion’s and Francis Wolff’s “last great protégé,” releasing 15 albums through Blue Note.

“I enjoy music, but I didn’t come to New York for fame or fortune,” Hill says in a sweet staccato voice with his eyes on Joanne’s portion of their portrait above the fireplace. “I came for love, and it’s been utterly, utterly amazing.”

Software? “FreeStyle and Sibelius, so I can play the music in my mind, see its shape on screen and hear it right away. I usually just sit down and scribble stuff on paper and come up with something without using a musical instrument, but the computer’s nice too.”

TV/movies? “I don’t watch them-except when I’m on airplanes. It’s nice to see those Hollywood stories, but I want to live myself. I tried to catch that Ken Burns thing, but-and I don’t mean this facetiously-I’d go to asleep when it started and wake up when it ended. I tried religiously [to watch], but I just couldn’t.”

Books? “Sometimes I can read 10 books in one week. Other times I can’t touch a book, because I’m practicing, playing and just participating.”

Sports? “Everything except baseball. I played football in high school but broke my leg the first day of practice, so I’ve been practicing and playing piano ever since.”

Projects? “I’d like to do something with hundreds of singers again [like Lift Every Voice (Blue Note, 1969)], but that’s just one of my pet projects.”