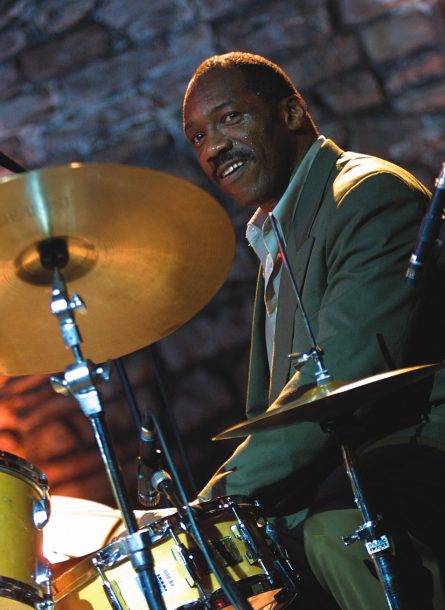 Small wonder Alvin Queen sounds so happy, speaking from his home in Geneva. The New York-born drummer has just spent his 58th birthday doing something he cherishes: photographing the magnificent Swiss Alps. A resident of Switzerland for nearly 30 years now, the accomplished drummer, bandleader and Nilva label founder reports that life is good abroad-very good, indeed.

True, he’s never enjoyed the sort of recognition many less gifted jazz artists have received, despite a remarkably prolific career on both sides of the Atlantic. His résumé is chockablock with impressive credits, including collaborations with Oscar Peterson, Horace Silver, George Benson, Ruth Brown, Don Pullen, Stanley Cowell, Pharoah Sanders, Randy Weston and Charles Tolliver, among many others. But Queen is keenly aware that in many ways he’s led a charmed life, and he’s delighted by a welcome turn of events.

For a while there, it seemed as if the Nilva catalog-roughly a dozen-and-a-half albums in all-would never see the light of the digital age. Queen put the label on hold in the early ’90s, after more than a decade of operation, when distribution problems appeared insurmountable. The Nilva story continues to unfold, however, and Queen has plans for additional reissues.

“What I was doing was trying to put something back that was not being recorded then,” says Queen, reflecting on the birth of his indie label. “At the time, Blue Note was not functioning that heavy, so all the musicians I recorded were great friends of mine. We were coming from the Slugs’ days, the old Five Spot days. I was going to record all the musicians who needed to be recorded, because I was so thrilled with the Blue Note sound.”

The next release, Ashanti, became so popular it helped boost sales of its predecessor. Says Queen, “That’s when I decided to go on and record different albums with Junior Mance, Charles Davis, Ray Drummond and Bill Saxton.

By the early ’80s, Queen was already living in Europe, but the Nilva sessions were recorded at Minot Studios in White Plains, N.Y. On one level, Queen explains, he saw Nilva as a way to rekindle the passions of his youth.

“When you heard Gene Ammons, Dexter Gordon, Art Blakey with “Moanin’,” Cedar Walton-these guys were firing up so much that you’d have to pull over the car. You’d say, ‘Now, wait a minute, let me see who this is,'” says Queen with a contagious laugh. “That was something that wasn’t there anymore.”

Though upbeat by nature, Queen is still coming to grips with the recent deaths of two close friends and collaborators: Oscar Peterson and Niels-Henning Ørsted Pedersen. Indeed, bassist Pedersen was responsible for helping Queen land gigs with two renowned trios, one led by Peterson, the other by Kenny Drew Sr.

“Oscar put the icing on the cake for me, being at that level,” says Queen. “Underneath he was a real warm person-that’s the person I got to know. I went into the band thinking, Oh, man, this is a genius. But Oscar used to sit down and talk to me like a son-all my priorities seemed to fall in place.”

Even though Peterson wasn’t in prime form when Queen joined the trio-the pianist suffered a stroke in 1993, affecting his left hand-accompanying the jazz legend was always a daunting experience. “He used to kill me with that right hand-unbelievable sense of time,” Queen says. “When I first got in there he was making some pretty fast tempos, but the biggest thing with Oscar was watching where he was going. You always stayed on guard because you never knew what to expect the next moment. He helped me develop that. That’s where the approval came from.”

Of course, approval came from others, and it came very early on. A musical prodigy, Queen grew up in Mount Vernon, N.Y., supported by a family that shared his interests. Andy Lalino, who owned a local drum studio, took Queen under his wing, serving as educator, urban guide and manager. Lalino often brought his young charge to Roseland, where the pre-teen soon distinguished himself as a wunderkind during a Gretsch Drum Night showcase, playing alongside Mel Lewis, Art Blakey, Max Roach, Charlie Persip and Elvin Jones. Thanks to Lalino, Queen also became a regular at the Apollo Theater, where he first heard the John Coltrane Quartet.

The precocious drummer was warmly embraced by the jazz community in Manhattan after being anointed “boy wonder” at Roseland. “I really got in the door. It was my turn to show them what I could do because I saw the shows at the Apollo.”

Soon Queen was roaming 52nd Street and heading down to the Village, “sneaking in all the places I could sneak in. At the Five Spot I couldn’t get in, but I used to sit by the door. I used to watch Monk run around the streets. I’d go back and say, ‘Dad, I saw this crazy guy running all around the streets.’ He said, ‘That could only be one guy, Alvin: Monk.'”

Later, Queen asked saxophonist Johnny Griffin what Monk was all about. “Everybody thought Monk was out there, but Monk was in,” Griffin told Queen. “He would get off the bandstand and go dance in the street-dance! He was looking for the rhythm. Once he found a danceable rhythm, he would go sit back down and hit the piano-Bam!” Says Queen, “That was where the rhythm was. Incredible!”

And then there was the night that Queen, again chaperoned by Lalino, unexpectedly found himself onstage at Birdland, briefly anchoring the Coltrane Quartet, no less, during what would later became known as the landmark “Live at Birdland” recording engagement. “Coltrane was like Charlie Parker then, someone new,” says Queen. “Buck Clayton, ‘Sweets’ Edison, Joe Williams-everyone was going by Birdland to see who was this man. What is he doing? The tunes are so long! He’d play two songs in a set. And Elvin! The glasses on the bar would rattle in there.”

Jones had “adopted” Queen following their appearance together at Roseland, and shortly after arriving at Birdland that night, the phenom from Mount Vernon suddenly found himself onstage.

As a young professional, Queen loved playing in and around New York City, partly because he was respected in a highly competitive market. (“If you couldn’t play, you’d have another tryout every three or four years. Everybody knew it-the word went out.”) The experience primed him for playing on tour with major artists, including memorable stints with Silver and Benson.

In time, though, Queen became frustrated with the lack of recording offers, among other things, so following his visits to Europe with Charles Tolliver in the early ’70s he began weighing his options.

“I had tried so hard and I thought I can’t do no worse, so I took off for Europe,” recalls Queen. “Things began to change and I worked all the time. Paris, Nice, Geneva-wherever there was a demand for me.” He was welcomed, and sometimes put up, by a large family of jazz and blues expatriates that included Kenny Clarke, Art Taylor, Memphis Slim and Champion Jack Dupree. Eventually settling in Switzerland, the drummer has never regretted the career move.

“I’m thinking about playing a little golf and coming out to perform more and do some workshops,” says Queen, sketching out plans for the future. “Everything is going well for me; it’s amazing after 40 years.” In fact, he adds, “It’s better for me now because I have more to offer.”