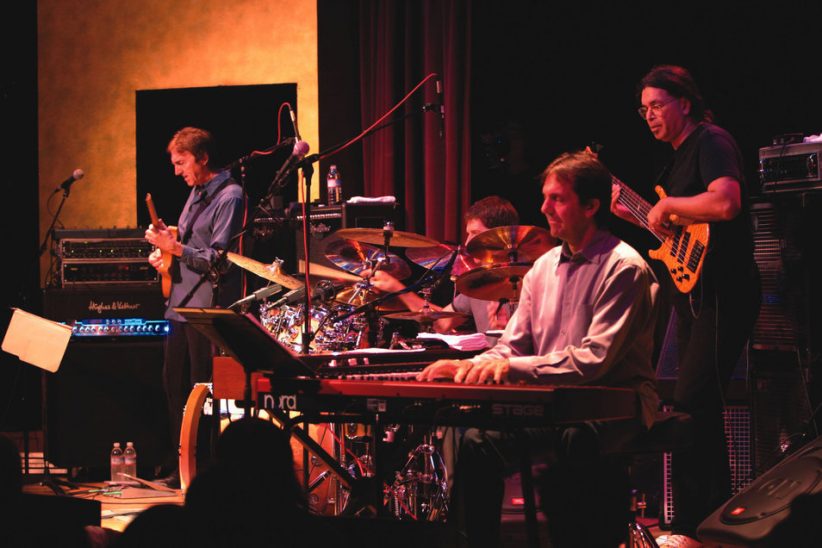 Guitarist Allan Holdsworth and keyboardist Alan Pasqua clearly released this all-star concert DVD to invite comparison to the New Tony Williams Lifetime, the quartet in which they worked together more than 30 years ago. Drummer Williams formed that group (rounded out by bassist Tony Newton) to follow up Lifetime, with guitarist John McLaughlin and organist Larry Young, a band he led after making his name with Miles Davis during the 1960s. Three of the DVD’s nine cuts are from Believe It, the New Lifetime’s scintillating 1975 debut.

Filmed at Yoshi’s in Oakland, Calif. last September, the video proves what a slippery slope that comparison can be early on. Bassist Jimmy Haslip’s solo highlights the otherwise cautious opener, “The Fifth,” and Pasqua’s programmed Hammond organ tones prove circus-like on “Looking Glass.” The audience comes alive as Chad Wackerman introduces “Fred” from Believe It. The drummer adeptly updates the late Williams’ fills, an awkward three-over-four pattern on his hi-hat cymbals. But Holdsworth’s solo can’t equal his epic original.

Perhaps the song sequencing was a set-up. From the opening minute of the two-part suite “It Must Be Jazz,” the remainder of the DVD features better performances, tones and editing between the close-up and wide-angle camera shots. Wackerman honors Williams on “Blues for Tony,” a stuttering piece that only approximates blues through Pasqua’s improved Hammond sounds. Holdsworth proves why he’s arguably the most significant electric guitar innovator since Jimi Hendrix, and the stellar Haslip gets pushed, and pushes back, in ways not afforded him in Yellowjackets. Two more Believe It cuts, Pasqua’s reverent “Proto-Cosmos” and a re-arranged version of Newton’s funky “Red Alert” close out a most believable concert.