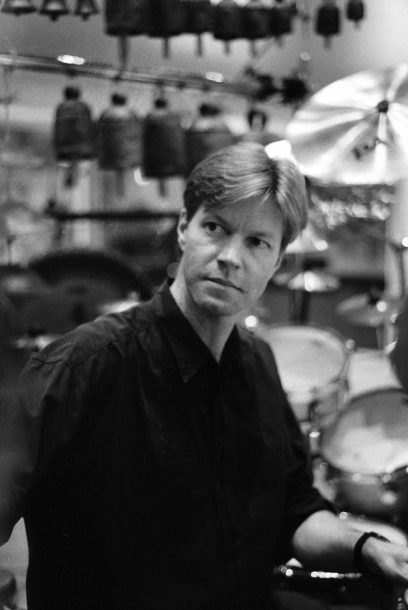 Unlike his enormous drum kit, which looks as big as a small city and gets more populated every day, percussionist Alex Cline’s discography as a leader isn’t very large.

“I’m not very prolific; let’s just leave it at that,” says Cline about why The Constant Flame (Crytogramophone) is just his third record as a leader since his 1987 ECM debut. Although he can be physically recognized as guitarist Nels Cline’s twin brother, Alex’s spacious, contemplative jazz is completely different from the raucous fusion often associated with Nels.

Cline is better known as a valuable sideman-the 45-year-old has appeared on nearly 50 releases-because he hasn’t had many opportunities to take his band into the studio. When he does record, however, the results are striking, original works. The Constant Flame is the second part of a series that began with 1999’s Sparks Fly Upward that includes compositions dedicated to people who have impacted Cline’s life and music. The album marks the return of his sextet, but also its demise, as the band is no longer a working group: haunting vocalist Aina Kemanis, whose astounding, ethereal style is crucial to the group’s sound, has decided to retire from performance. All four of Cline’s recordings as a leader have featured the core of Kemanis, violinist Jeff Gauthier and pianist/keyboardist Wayne Peet. Bassist Michael Elizondo and guitarist G.E. Stinson have appeared on the most recent two; brother Nels makes a guest appearance, too.

One of the reasons Cline isn’t so prolific creating his own music is that he’s always busy collaborating with others. His skill and adaptability has made him the most-called-upon drummer in the adventuresome side of the Los Angeles scene. After playing mostly rock music with his brother as teenagers, Cline came on the jazz scene in the mid-’70s and began playing with artists like Baikida Carroll, Julius Hemphill and Vinny Golia. Since then, Cline has played with scores of forward-thinking and experimental musicians, including Tim Berne, Wadada Leo Smith, John Carter and Horace Tapscott. Cline currently plays in Vinny Golia’s Quintet and Large Ensemble, Gregg Bendian’s Interzone, Don Preston Trio and a cooperative trio with Gauthier and Stinson.

“All the work undertaken as a sideman actually helps to necessitate the creation and production of one’s original music,” says Cline, who considers himself a constant apprentice. “One of the great things about all of these musicians with whom I frequently work is that they share very broad musical inclinations and interests, making this kind of seemingly conflicting contrast quite harmonious in practice.”

Although Cline’s delicate, diffuse drumming shines through on his albums, his ability to write and arrange for a small band is equally as impressive. One of the most important aspects to Cline’s unique, textural sound is the wide variety of percussion instruments he uses. His mammoth setup for The Constant Flame included a vintage Camco drum set augmented by two levels of cymbals, various Asian bells and gongs (from China, Thailand, Japan, Burma), wind chimes and such oddities as Bundt cake pans and scrap aluminum. “I love all this stuff,” says Cline, referring to his large percussion collection, most of which he doesn’t get to use on other recordings-and especially in live performance.

“Sometimes the biggest challenge is fitting myself as an instrumentalist in my music,” Cline says. Even though he is the band’s sole composer, the group rarely sounds as if it is focused more on drumming than any other instrument. “I’m not too crazy about doing drum solos, which is pretty funny because I used to do solo percussion performances.”

In fact, Cline actually made a double-LP of solo drum performances (Not Alone, 9 Winds) in 1981, but Cline recorded his first group album, The Lamp and the Star, in 1987 without a record deal. The record was soon picked up by ECM. For the follow-up, Montsalvat, Cline tried the same approach. He reassembled his band for a 1992 recording session, but was unable to find a label willing to release the album, until 9 Winds released Montsalvat in 1996.

“I’m much better off documenting my music now,” says Cline of his relationship with the Los Angeles-based Crytogramophone label. After six years of not being able to record his band, Cline has made two records within the past three years, both produced by Peter Erskine.

Besides his own music, Cline has appeared on six other Crytogramophone releases in the past three years, with three other albums already recorded, including a CD by Quartet Music, the 1980s band that Cline played in with his brother, Gauthier and bassist Eric von Essen, which the label plans to release next year.

Now that Cline’s ensemble has dissolved, he is looking to a start a new group that probably will be an eight- or nine-person band. The man with the gargantuan drum kits says, “I had ideas to move into something smaller. But I’m resisting them.”