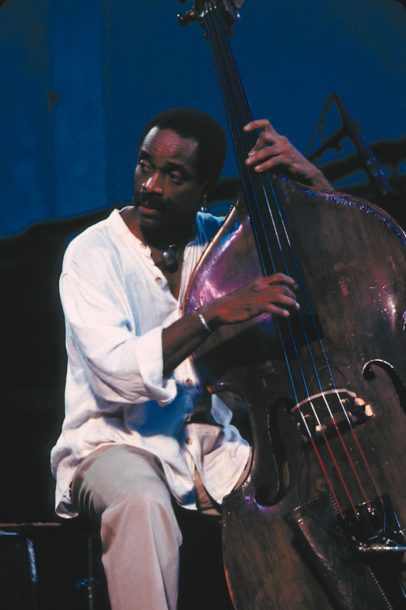 “I started playing professionally when I was 12 years old,” says the Panamanian-born, American-bred bassist Alex Blake. “The music I was playing was Latin; I was playing with great percussionists like Kako and Patato.”

He’s also played with some of the biggest names in jazz: Dizzy Gillespie, Manhattan Transfer, Freddie Hubbard, Lenny White, Randy Weston, Billy Cobham, Sonny Rollins-“You name the groups, and I’ve played with them…I can’t even remember some of the groups I’ve worked with, there’s just so many.” Blake also toured Europe when he was 16 with Sun Ra and played an extended gig in Chicago, far away from his New York home. “I was kinda skipping school a little bit; my parents were a little pissed off.”

So how did the nearly 50-year-old Blake, who’s been around the world and back with high-profile bandleaders, elude entry in The Biographical Encyclopedia of Jazz and The New Grove Dictionary of Jazz ? And how did he only now release his aptly named second album as a leader, Now Is the Time: Live at the Knitting Factory (Bubble Core), featuring his quintet with Pharoah Sanders? “I had offers, and I wanted to do an album, but I had other things in mind; and I was so busy on the road, going out with the Transfer…I love writing, so I have a lot of material. Over the period of 1970 to now I don’t know how many tunes I’ve written…”

Blake’s first album as a leader, Especially For You (Sony), came out in 1979, but only in Japan; Now Is the Time marks his American debut. Bubble Core co-owner Adam Pierce, who plays vibes, bass and percussion in the dub-jazz duo The Dylan Group, saw Blake in performance and was so knocked out by the bassist that he offered to release an album. While the Bubble Core is eclectic, it has focused mostly on experimental electronica and rock; Now Is the Time marks its first straightahead jazz release-and it’s an auspicious debut.

In addition to Sanders, Blake’s quintet includes pianist John Hicks, drummer Victor Jones and percussionist Neil Clark. On Now Is the Time the group tears through three Blake originals and a cover of Guy Warren’s “Mystery of Love”-though “On the Spot'” is based on the changes to John Coltrane’s “Giant Steps.”

“I was in Norway with Pharoah Sanders last year. We were rehearsing and we started going through a couple of tunes…and all of the sudden this tune started coming up in my mind, and the first couple of changes were like ‘Giant Steps.’ At first I said, ‘No, no, no, I’m not gonna go there,’ but it just kept staying there; it just wouldn’t go.”

Blake cites Richard Davis, Jimmy Garrison, Reggie Workman as bass playing influences, and also Jimi Hendrix and Eric Dolphy. Despite having a strong background in Latin music, however, Blake’s compositions don’t reflect that experience; but his bass playing does. “It’s a strumming technique; it’s like having a guitar and congas and putting them together with the bass. It’s a construct of strumming and playing the congas; that’s the percussive side of my playing. That’s the concept of my playing.”

Blake demonstrates his full arsenal of percussive techniques and lyrical lines on a remarkable solo performance of The Beatles’ “With a Little Help”: His bass playing sounds like an a cappella jazz singer improvising on the melody. It’s one of the few times Blake spotlights his own playing during the gig.

You wouldn’t know it from his spirited performance on Now Is the Time.