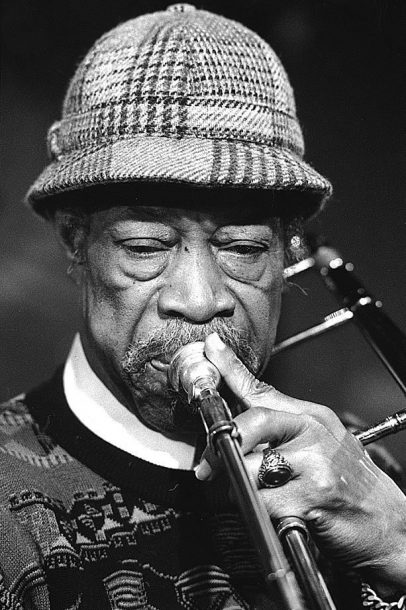 Al Grey has his own trombone sound, recognizable in just two or three notes. Like his friend Clark Terry, the sound he caresses from his horn is totally original, a musical signature that has been in the ears of jazz listeners for more than half a century. A sound that played an integral role in the Count Basie band for almost 20 years.

Frank Sinatra picked up on it when he recorded Sinatra Live at the Sands in 1966 with the Basie band. There was only one instrumental on the album, Al Grey’s feature, “Makin’ Whoopee.”

With his plunger mute in place, Grey’s fingers manipulate the speech-like sounds coming from his bell. He can be gruff, growling and even witty with note combinations that can almost be understood as words.

Grey developed his singular style “from listening to Sarah Vaughan and Ella Fitzgerald and all the different singers. I chose to make myself like a vocalist,” he explains, “since I’ve played background fills for the most famous singers you can name going all the way back to Bing Crosby.”

Grey recently turned 72 and is as busy as ever. After having suffered through complications from a diabetic condition which necessitated the amputation of several toes, he reports that “I am well, strong and taking extraordinary care of myself so I can play because I love music.”

During his hospital stay, he learned about the healing power of music first hand. “I discovered that I could take pain away from myself by picking up my horn and playing it,” he recalls. “The next thing I know, I wasn’t feeling the pain. The day I got out of the hospital, July 4th, I was on a plane to Vienna and when I got there, we played for people in the streets, who were waiting in the rain. They had to prop me up so I could play, but I could play because I’d been playing in the hospital.”

On the day before the Super Bowl, which he planned to watch at Clark Terry’s house, just a few miles down the road in Long Island, Grey greeted me warmly in his living room, which overlooks the water. He was celebrating the release of his latest CD, Matzoh and Grits, on Arbors Records, and reflecting on his remarkable career.

“I fix grits,” he explains, “And Rosalie, my lady, fixes matzoh brei. Well, if you put some grits on your matzoh brei, it’s a delicious taste. That’s how we came up with the title,” he says with a twinkle in his eye.

Asked about Grey, trombonist Delfeayo Marsalis remembers how his fellow trombonist “let me stay at his house and he cooked up a big turkey for me when I had a gig in Philly, where he lived. We don’t really have that going on much with jazz musicians today, someone who will take you in. With Al, it’s not only about the music but about the person. He’s always supportive, he always has words of encouragement.

Marsalis also believes that Grey’s personality is “indicated in the way that he plays. He always has that joy in his tone. I did a summer camp with him and asked him to play ‘Makin’ Whoopee’ with the plunger mute. A lot of the younger students, they only want to hear you play fast, but when you hear him sing like that on the horn, it’s easy to understand why he was Basie’s favorite trombone player.”

Many young musicians have been touched by Grey. Trombonist Robin Eubanks used to hang out with Grey’s son Mike, who’s also a trombonist, and he remembers how Grey “took us under his wing when we were teenagers. Al would come off the road and hear us playing and bring out some music. Al and Jimmy Forrest would be hanging out, and since they were playing with Basie, they’d bring some of the arrangements and help us with our reading. He was a tremendous inspiration.

“When I hear him, even today, playing in the upper register with great volume, it always sounds like a lion roaring,” Eubanks explains. “Al’s always been an invaluable resource, and always been very supportive.”

It was Count Basie who dubbed Al Grey as “Fab” one night on the bandstand after one of his plunger features brought down the house. “Basie said, yes, he’s the fabulous one,” Grey recounts, “Fabulissimo, Fab. Then all the guys in the band started to laugh and after that set, they teased me about it. Yeah, Fab. Hey, Fab. What’s happening, Fab. The next thing I knew, everybody was calling me Fab. I even made a record called Fab.”

Grey joined the Basie band after a couple of years with Dizzy Gillespie’s distinguished big band of the ’50s, which toured the world under the auspices of the State Department. Dizzy Gillespie Live at Newport, taken from their 1957 appearance, features several extraordinary Grey solos along with Dizzy, a 19-year-old Lee Morgan, Benny Golson before he became a Messenger and Wynton Kelly before he joined Miles.

“I joined Basie when another trombonist got sick,” Grey recalls. “I was living in Philly, went to see the band and noticed that there were only two trombonists up there instead of three, which he was using at the time. The guys in the band saw me at the gig and told Basie. He waved at me like a trombone and I went all the way up to the north side of Philly to get my horn. When I came back and played, the trombone lost his job. But it was for the better. The man was Tom Macintosh and he became a big writer in the studios.”

Two other players joined the band at the same time, trumpeter Snooky Young and Eddie Lockjaw Davis on tenor sax. “It revitalized the band,” he believes. “Those changes and Neil Hefti’s charts turned the band around because Joe Williams had been with the group and he was the dominating influence so when he left, there was a void.”

In addition to Basie, Grey’s resume includes just about all the major players of his time. He jammed with Bird. He played in Benny Carter’s big band alongside Miles Davis when “Miles was still wearing knickers.” In Lionel Hampton’s band, his roommate was trumpeter Quincy Jones. It was Jones who “gave me the opportunity to play in movies and recordings. Quincy wanted me to move to California and work in the studios but hanging out with Dizzy convinced me how important it was to stay in New York and play jazz.”

After a stint with Jazz at the Philharmonic, where he played with Roy Eldridge, Oscar Peterson and Louie Bellson, Grey hooked up with fellow trombonist J.J. Johnson. “Norman Granz said, just go into the studio, I don’t care what it costs.” They recorded Things Are Getting Better All The Time. “With J.J.’s tunes, my plunger, his open sound and Ray Brown, Kenny Barron and Mickey Roker, we had all the right ingredients,” he happily recalls.

There are other memories, some not so pleasant: “When we first played Las Vegas, in the ’50s, we had to go down into the hole. We were playing a battle of the bands with Harry James and Basie at the Flamingo. After we played, we had to go down to the basement, to eat and drink. One night the Crosby boys came through and said, we’re not going to be buying 100 dollar bottles of champagne for the Basie band to drink down in the basement. So we went upstairs and we refused to go back down after that. Count Basie thought he was going to lose his job, but we fought for that.

“There was a lot of stuff like that, but I chose to go with the music. That’s the important thing. The music. Music is something to be loved. And I love it.”

Al plays an Al Grey model Blessing Trombone and the Blessing Marching Trombone. “I had a special mouthpiece that was made for me many years ago that Trummy Young gave to me. It was stolen from my car about three years ago, along with my horns. It didn’t matter about the horns but the mouthpiece, well, I still haven’t completely recovered.”