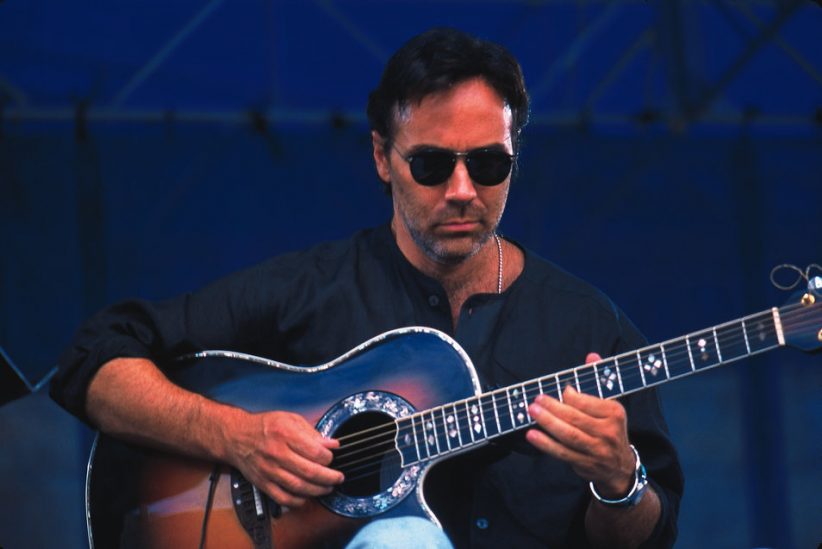 Al Di Meola’s latest release, The Infinite Desire, on Telarc, finds the forty four year old guitarist and composer at a career peak. The recording is a piquant amalgam of varying influences and the twelve distinctive originals that constitute this exuberant, imaginative set reflect the confidence of seasoned veteran.

Regarding his regimen for composing, he explains that “it’s a process. For me, I find there is no one set way to write music. But for this record, I did something very interesting. I separated myself from everyone and came down to my new place in North Miami Beach on the water. I just told my family, I’m going to write, see you in a couple of weeks. When I got here, the stuff just poured out. Everything on that record was written here, except for ‘Azzura,’ which I wrote for the trio. Then I went back to New York, rehearsed it and put it all together.”

Like the music, the performers were an eclectic mix, including Di Meola’s working group and guest keyboard players Herbie Hancock and Rachel Z. As for the unique blending of guitar synthesizers, world music and voices, Di Meola reports listening to “the group Deep Forest. I’ve always wanted to do something with voice and I was looking for more a full experience on this record, not just a blowing or composition or acoustic record. When I work that way, I keep it fairly simple on the production side but here I did something different, as much as possible within the budget.”

The music on The Infinite Dream was also inspired by the Venetian painter Andrew Vizzini, who provided the striking album art. “We had books of his collection laying around the studio,” Di Meola explains “and all of the musicians involved would periodically glance through them for inspiration. Even people who aren’t normally versed in art are moved by his work. He’s about fifty and showed up at one of my shows last year when we played outside of Venice. I was really moved that he was gassed by the music. He’s actually painting to my music right now so we’re planning some exhibitions at some point down the road.”

For the legion of young guitarists who consider him a hero, Di Meola has some advice: “Copy your heroes, imitate them, don’t be afraid to imitate. If you have someone that you dream to play like, try to play like them and you will discover your own voice and learn a lot in the process. It’s just inevitable, in the end you will not sound like them but you will learn and find you are developing your voice.”

Di Meola found his own voice early on, and when we spoke the discussion quickly turned to memories of that heady period in the early 70s, coming out of Bitches Brew, when a new music dubbed fusion was being born. Di Meola was present at the birth, as a member of Return to Forever, and believes “it was groundbreaking. Before that, there was no fusion music. Rock and roll was rock and jazz was jazz and then came Mahavishnu, Return to Forever and Weather Report.”

The New Jersey native remembers being a guitar student at Berklee, who listening to the Brazilian incarnation of RTF. When the group evolved into a more electric band, with Bill Connors on guitar, “I was even more impressed because they had my instrument, the guitar, in the forefront . And I love Chick’s composing, so of course RTF became my favorite group. I went hear them in concert and the band had changed again, with Lenny White on drums and Earl Klugh on guitar. After seeing that concert I called a friend in New Jersey and told him a dream of mine would be to play with RTF. He took it upon himself to send Chick a Barry Miles tape I played on. Then, I got a call from Chick while I was at Berklee to join the band.”

Di Meola remembers the experience, certainly a formative one, as “a very productive two years, plus but it felt like a much longer period because we did so much. We recorded three albums and toured non-stop.” Listening now to the music of RTF, Di Meola hears it as “highly spirited and full of content compositionally. There was a lot of music geared around classical influences blended with jazz in that version of RTF, certainly a lot less of a Latin influence that the group had before. We were young, and energetic, and technique played a big part in the music as well.”

“Later on,” he explains, “with my own music, harmony became much more important. I think RTF needed more of that in the improvisations but compositionally we were really exciting and interesting, certainly compared to the muzak being played on soft jazz stations today.”

Sad but true. What started as fusion has evolved into fuzak. I too remember the energy and excitement generated by the early groups, like going to hear the Mahavishnu Orchestra and being totally blown away by the power and majesty of the what they were playing.

“The music just doesn’t do that anymore,” Di Meola explains. But where did it go? “My feeling was that there were just a few people in the beginning who happened to be the best at doing it. When the original groups broke up, it just wasn’t the same. The massive success of the beginning era spawned hundreds of people making fusion records and these second generation players-well, a lot of them weren’t great writers. How do you keep one’s attention with just technique or great improvisation skills when the compositions are lacking. After a while it gets a little tiring to listen to, which is what has happened now.”

“Easy listening jazz started off great when GRP was young and new but now it’s like, do we really need another one of those easy listening saxophone records? God no! It would be wonderful if we were in a fantasy world and could come full circle and the music could knock people out again. If you could go to hear someone in person or on the radio and come away saying, that was great. Where is that vibe today? Why can’t that happen anymore. I think it’s largely due to radio. Unfortunately, if music is exciting, it cannot be played on the radio.”

Di Meola makes his case by explaining how radio has become a heavily formatted medium. If Weather Report debuted today, their music wouldn’t be played on the radio. Aside from a handful of stations with eclectic programming, jazz stations fall into two categories, classic jazz or lite jazz. Weather Report defies that simplified categorization.

“Radio has become such a huge business, to buy a little radio station costs a fortune, millions and millions of dollars, that these people have to worry about paying their bills. They need advertising dollars, so they have to play music for secretaries and people in malls, wherever they can get access. The music has to be on all day and not take their attention away from their work.

Di Meola also sees radio as a conspirator in the disappearance of jazz standards. “Twenty two years ago, we heard ‘Birdland’ on the radio, every hour on the hour on every station. We don’t have that anymore. What we have is real soft, no depth kind of stuff for the most people. A lot of the players may be creative and really good musicians, but they’re stuck doing that because they’re so desperate. They may not have made a name during they heyday of the fusion era, or as a jazz artist in their own right before the NAC boom, they so completely rely on radio to play their records or else they’re not going to work.”

“For my music, I stick to what my forte is. I like a lot of elements in the music, I like a degree of excitement and I’m not going to extract those elements to meet the criteria of radio programming. If I did, I’d make a boring record. I’ll never do that.”

“I listen to a lot of different music, In my car lately, I’ve been listening to Sgt. Pepper and Magical Mystery Tour by the Beatles. I think one needs to go back to those records, like they need to go back to Coltrane’s Giant Steps. Those two Beatles records are really amazing, so fulfilling. Even harmonically, the music is rich and the production is inventive beyond belief. At a time when they were dealing with four tracks and only occasionally eight to record, the sound is just amazing.”