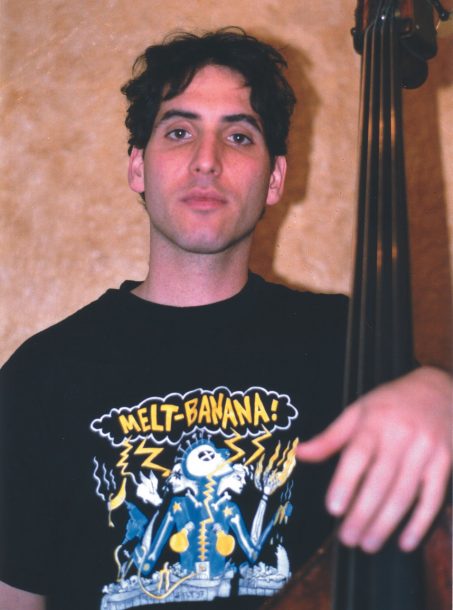 One concert, and bassist Adam Lane’s life was set. “I was 19 years old. I saw the Art Ensemble of Chicago perform, and it turned my world around. This was the point for me. It made complete sense, and it was what I was going to do,” he says. For Lane, the Art Ensemble combined all the music in his life-he played jazz and classical and listened to rock-into a cohesive, exciting whole. That wild synthesis became Lane’s inspiration, and Fred Hopkins became his primary model.

Lane then spent his 20s making his own wild syntheses. He lead and composed for a succession of large ensembles, like his still extant, Bay-area group the Full Throttle Orchestra, which combined everything from Japanese hardcore to Bootsy Collins and Charles Mingus. At the same time, Lane maxed out the timbral possibilities of his acoustic bass with distortion boxes and megaphones.

Recently, Lane has refocused his interests on free improvisation and postbop. This development more or less corresponded with Lane’s being recruited into saxophonist John Tchicai’s Infinitesimal Flash band. “Tchicai, man, that was a whole other thing,” Lane says. “Here was the opportunity to play with John Tchicai, who was right there at the beginning of it all. I tell people that playing with him, it’s like going to school again.”

When Bob Rusch at CIMP records asked Lane to consider putting together a small ensemble as a contrast to his large group work, Lane knew he had to use Tchicai. By the time he put the quartet together, adding drummer Barry Altschul and trumpeter Paul Smoker, he found himself surrounded by some very heavy players. In particular, the prospect of playing with Altschul, a player whose music Lane had been studying since he was 16, proved particularly daunting. “Intimidating? You have no idea,” he says.

Lane had to talk himself into following through with the project-“I practiced my ass off for years, and I’m not Dave Holland, but I’m not trying to be either,” he told himself-but came out with power and confidence on the resulting recording: the hard-charging, blues-inflected free-bop session Fo(u)r Being(s). Lane’s association with Tchicai continues with the recent recording, DOS, a CIMP set of duos that takes Lane back to the days when he and Tchicai would play alone together at UC Davis. In keeping with Lane’s memories of those performances, DOS takes a more melodic, playful path than the quartet session. What survives is Lane’s inventive though never unswinging support. “As I bass player, I love to swing. The bass allows me to explore a deep sense of groove. It’s a wide-open field of sonic possibilities.”