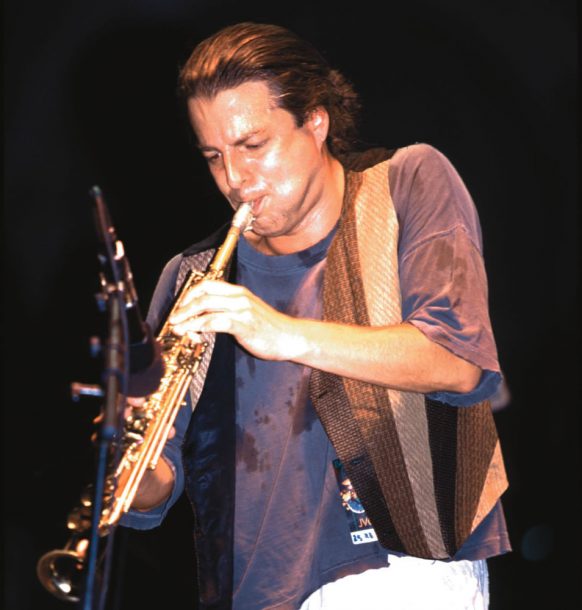 The subject of jazz is so vast, and going off in so many diverse directions, that saxophonist Adam Kolker thinks that the idiom is “kind of a free-for-all.” But don’t think he’s complaining; on the contrary, Kolker knows that’s the beauty of it all.

“People often try to assign a particular style of music as jazz,” he says, “but the genre is really all encompassing. There is a tradition to our music, of course, and what we try to do is take parts of this jazz heritage and move them in new directions. That makes for creative and exciting music.”

Self expression is key for Kolker, who credits players such as Dave Liebman, Michael Brecker, Joe Allard, Coltrane, and Wayne Shorter as inspirations, to name a few. “I’m also attracted to musicians who are into subtleties, and my voice is getting there. I dig tone, sounds, and colors and I really listen to the other people I’m playing with. I want to take all that jazz history that I’ve absorbed and let things happen with the other musicians I’ve chosen to play with.”

And those cats he plays with are a source of joy for Kolker, who says they all share his mindset when it comes to music. His latest release, Crazybird, on the A-Records label, features Kolker on tenor and soprano, as well as bass clarinet, and Tim Hagans on trumpet, Kevin Hays on piano, bassist Doug Weiss, and Jeff Ballard on drums.

When not gigging in New York, Kolker tours and records with the Ray Barretto aggregation and he’s started teaching jazz at the university level.

His prognosis for jazz is somewhat guarded, comparing it to the prognosis for great literature or good television. But he is inspired by the 350 students now enrolled in his jazz history class. “Hopefully they’ll share my passion for this music. I love to play more than anything else and my plan for the future is to keep on doing it.”