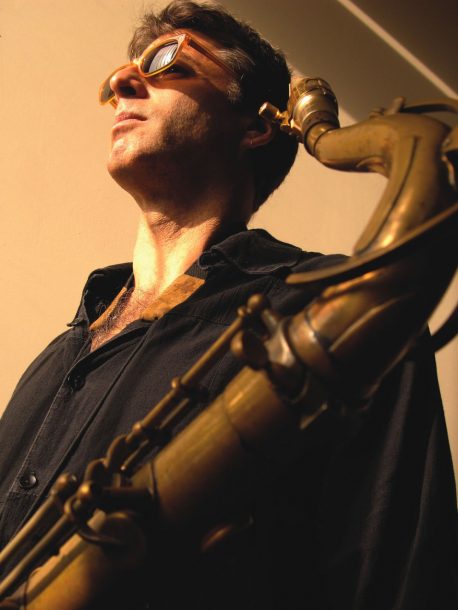 Claims made in liner notes can’t always be taken straight to the bank. But Peter Watrous’ proposition in his notes to Adam Kolker’s new Sunnyside CD, Flag Day, is supported by the album’s contents. The former New York Times jazz critic writes that Kolker “may be the musician of his generation who suffers from the greatest imbalance between his large abilities and his reputation.”

Most tenor saxophonists play some version of density. Kolker is different. He is about minimalism and subtlety and oblique understatement. He possesses an unerring instinct for fresh melodic form, yet the allure of his gentle sound, the way his notes liquefy, renders his free concepts accessible. On Flag Day, he only glances off “Last Night When We Were Young” for five minutes, and when he lets the melody coalesce in the final 40 seconds, the poignancy is piercing.

As for being under the radar, Kolker accepts most of the responsibility. He acknowledges that, in his pursuit of a jazz career, he has “had a tendency to get diverted.” He was born in Manhattan, grew up in Philadelphia, and earned a bachelor’s degree in music from the University of Miami. After earning a master’s from New England Conservatory, he began working in Broadway shows. He spent several years on the road with Broadway shows that were touring the United States and Europe. He moved to New York in 1989 and “did what freelance jazz musicians do: a lot of jam sessions, a lot of subbing. I developed associations with like-minded musicians in New York and played with them as much as possible.”

He frequently filled in with two of the best big bands in town, Maria Schneider’s and the Vanguard Jazz Orchestra, and one of the “like-minded musicians” the saxophonist met was Ray Barretto, in whose ensemble Kolker played 15 to 20 weeks a year for nine years. (Kolker’s tenure with Barretto might be counted as another diversion. He says, “Ray had a real jazz band, but the fact that it played Latin rhythms meant it didn’t have any street cred with the jazz audience.”)

Between 1999 and 2007, Kolker was a full-time instructor at the University of Massachusetts, spending four days a week in Amherst and three in New York. The decision to leave that job after the 2007 school year did not necessarily signal an end to his “diversions.” In the spring of 2008 he took a job in the 27-piece orchestra of the Broadway show Gypsy, starring Patti LuPone. But he will still be able to do jazz gigs and even occasional tours. He says, “The beauty of working on Broadway is that you can sub out 50 percent of the time.”

Kolker is his own worst critic. He says, “After I finished Flag Day, I hated it. I could hear everything that wasn’t there. But that’s what happened that day-those six hours that we were in the studio. That’s what came out. That’s where it went. And now when I listen to it, however many months later, I think it’s some pretty nice music.” Kolker had played often with guitarist John Abercrombie and bassist John Hebert, but it was his first experience with drummer Paul Motian. He says, “To me, Paul is like the painter Mark Rothko: blocks of color on canvas. Paul has reached that kind of purity. It’s like a primitive state.”

Clearly, Kolker is a complex personality. He is an academic who has gravitated to the security of steady work and who can be highly analytical about the creative process. But he is also a free spirit who dares to trust his imaginative impulses. In the first guise, he says, “To me, there are certain artistic principles that, no matter how they are expressed idiomatically, are sacrosanct: principles of balance, tension and release, voice leading. Why do we study Charlie Parker? Not to sound like Charlie Parker, but because he was Bach, a master of connecting melodies to make large statements.” In the second guise, he says, “The best compliment I ever got was when someone [it was Ben Ratliff in the New York Times] called me ‘a real improviser.’ Dave Liebman once told me, ‘If I don’t get lost in a solo I’ve failed.’ I believe that. To lose yourself in the moment, to get beyond. That’s what matters.”

On a recent Sunday evening in New York, Kolker did more of “what freelance jazz musicians do”: a gig in an obscure dive for negligible money, for “a chance to hang and play.” It was his one night off from Gypsy, and the dive was the Grassroots Tavern in the East Village. Kolker, bassist Jeremy Stratton and drummer Rodney Green set up in a corner and played without amplification. The customers standing on the sticky floor or seated at the tables carved with graffiti seemed more interested in their beers and each other than the music. Kolker’s exquisitely precarious breathy balance on “Some Day My Prince Will Come,” the tension and release of his broken lines on “Body and Soul,” were sometimes drowned out in the babel of voices. But Kolker, lost in the music, appeared not to notice.