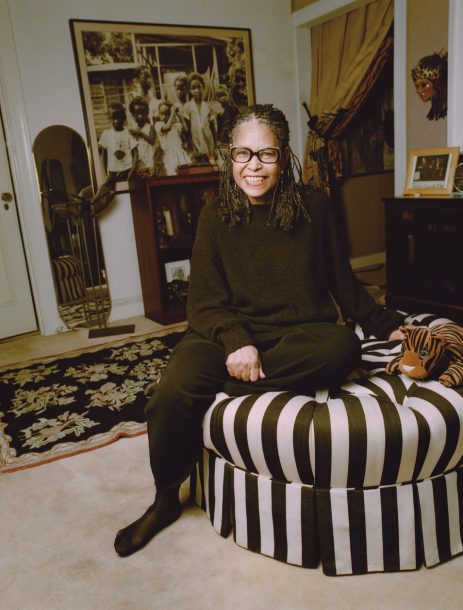 “The last thing I want to look is sexy, you hear me? I don’t want nobody coming for the sex from Abbey,” says Abbey Lincoln on a bright, brisk winter day as she repositions pillows for an afternoon photo shoot in her first-floor Manhattan apartment. Sensuality and majesty, however, are stitched to the vocalist’s sofa, spread across her shelves, spoken in her songs and woven in her bright paintings and handmade dolls.

“The dolls are like the paintings,” says the 72-year-old on a walking tour through six rooms decorated with more than 25 paintings, 10 dolls and numerous awards, plaques and photographs. “It’s something to do when I’m not onstage. I make them out of nylon stockings, cotton and chopsticks.”

Offstage, Lincoln also finds comfort in her family. The third youngest of 12 children, she grows gleeful when remembering her parents, rising in registers and lifting her shoulders when she speaks of them. “I come from a great woman and a great man. Momma let me know what a woman was, and what a lady is. We were resourceful, and we didn’t know we were supposed to be poor.” From rural Michigan, Lincoln moved to Honolulu when she was 22 and, later, to Los Angeles and New York City for film and music careers-along with a few name changes. Born Anna Marie Wooldridge, she became Gaby, Gaby Lee, Abbey Lincoln and Aminata Moseka. “My manager named me after Abraham Lincoln. He said to me, ‘Since Abraham Lincoln didn’t free the slaves, maybe you can handle it,’ and I’ve been Abbey Lincoln ever since.”

Lincoln has long been a socially active musician who once stirred waters with former husband drummer Max Roach on their 1960 recording We Insist! Freedom Now Suite. But other than good Japanese food, she says that these days, “I don’t insist on anything. I’m at my leisure, free as a bird. My home is a solitary place. I go to the stage and perform-that’s enough entertainment.”

Lincoln’s list of album credits includes Sonny Rollins, Coleman Hawkins and others. Her wardrobe, as illustrious as her history, includes blues that match her paintings and greens that match her many plants. The 10 plants in her kitchen and six-foot-tall tree beside her marble grand piano are both decorative and symbolic. The plate of salami on the counter, while less symbolic, looks delicious. Offered a margarita, I politely refuse, but wow, can she mix.

She can also narrate. “You know why they love Billie Holiday? Because she sang ‘Strange Fruit’ when they were lynching people in the South. She sang the stories of her life, just as I do.” Telling stories that are happy, sad and neither has earned Lincoln a 2003 American Jazz Masters Fellowship from the National Endowment for the Arts. “It’s [because of] Billie Holiday. She cloned me.” Lincoln also says that Roach gave her much guidance. “You know when I was lonely? Before I met Roach. He is the great Max Roach, whether I ever met him or not.”

Lincoln’s stories and smiles are interrupted by a phone call from Belgium with news of pianist Mal Waldron’s passing. Moments of silence lead to false laughs and few words about Waldron, who performed with Lincoln on Roach’s Percussion Bitter Sweet. “There’s a bunch of us dying. Eventually, I want to leave a monument to the music where people can come and study, get shelter and perform. I heard somebody say to Max once, ‘Is jazz dying, Max?’ And Max said to him, ‘Are we dying, Jesse?’ We are the music.”

Projects? “I have an autobiography I have to finish. We were also just in the studio. I’ve got a new album, but it’s not finished yet. The title may be Love Is Made. It’s with the great Kenny Barron, the great Ray Drummond….”

Books? “I don’t hang with them. I [also] don’t sit around

listening to myself. I’m a spirit, not a nut.”

Food? “The Japanese have the greatest diet I’ve ever encountered. They’re brilliant. I would like to live without food at all. I’d also like to walk through walls, but I don’t know how to do that [either].”

Computer? “I’ve got my hands full with the typewriter and the fax machine.”

Exercise? “I studied yoga, and sometimes I dance onstage, if I feel like it. I don’t have that kind of an ordered life, though. I’m not ritualistic for anything. I just live, like an animal, because I am.”

Marriage? “I’m an African woman. I’m a polygamist. I don’t care for monogamy and the lies it embraces.”