Skip to content
Become a member and get exclusive access to articles, live sessions and more!
Start Your Free Trial
Home > JT Archives > Ab Baars Trio: Party at the Bimhuis 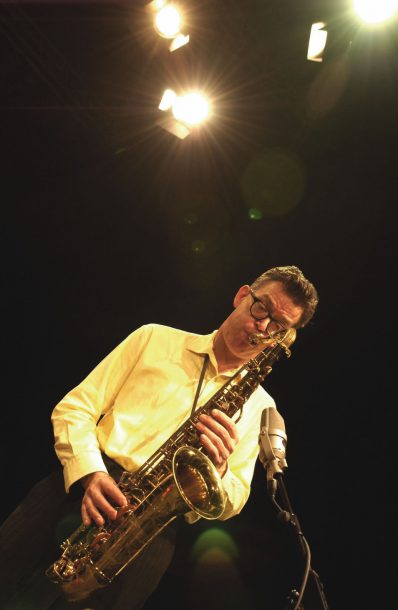 I hate to perpetuate stereotypes, but there’s no denying that there’s a big difference between the sweaty, aggressive, take-no-prisoners style of free jazz played in New York City and the cool, restrained, take-lots-of-prisoners-and-parole-them-immediately kind played in the Netherlands. Not that either is better or worse, mind you, but it’s hard to imagine that a person in love with one would be nearly so fond of the other. Party at the Bimhuis (Wig), by the Dutch tenor saxophonist and clarinetist Ab Baars’ trio, makes my point even as its wit and grace win me over.

From the free-associative solo clarinet that starts “3900 Carol Court” to the breathy, drunken tenor that shows up on Thelonious Monk’s “Reflections,” Baars proves himself an imaginative and amiable improviser. His principal collaborators, bassist Wilbert De Joode and drummer Martin Van Duynhoven, won’t earn any “Burning-est Rhythm Section” medals, but they’re tasty in the manner required. The trio is ably accompanied on selected tracks by guest stars Ig Henneman on viola, Mariette Rouppe van der Voort on alto sax and flutes and Guus Janssen and Misha Mengelberg on piano. The compositions mostly work, except for Janssen’s “Indiaan,” a caricature of Native American music (speaking of stereotypes) that falls flat in the yuks department. As for fire, well, it’s cold in the Netherlands, isn’t it? Still, there’s plenty to like about Baars and friends, even for an unrepentant New Yorker like me.