Skip to content
Become a member and get exclusive access to articles, live sessions and more!
Start Your Free Trial
Home > JT Archives > “A Tribute to Wes Montgomery” at the Cape May Festival, Cape May, N.J. 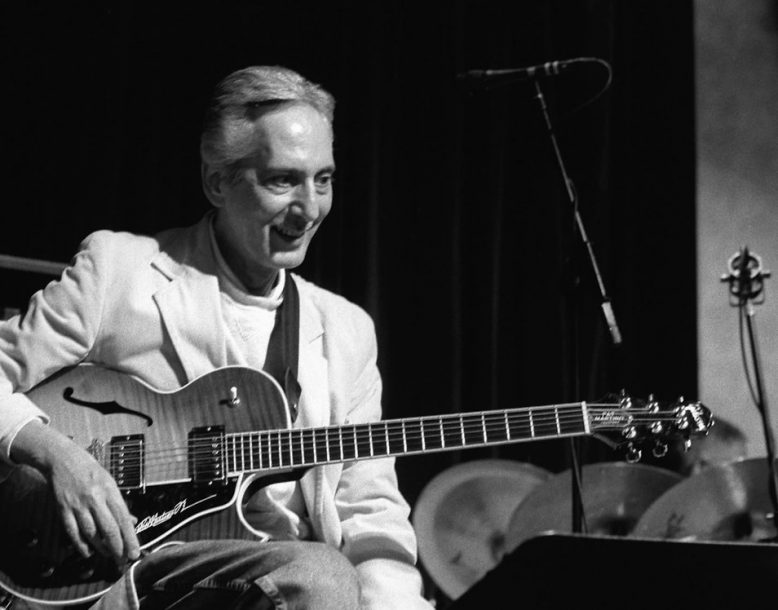 The theme for the 27th edition of this biannual clambake in the charming Victorian town by the Jersey shore was “A Tribute To Wes Montgomery.” It was fitting, then, that festival promoters Carol Stone and Woody Woodland booked Pat Martino (pictured), the only guitarist on this bill of several capable Wes-inspired six-stringers who had actually met the great man himself. Between songs of his headlining engagement at Convention Hall on Friday night, an uncharacteristically talkative Martino shared with the audience his childhood memories of first hearing Montgomery on record. He also reminisced about one special night at Count Basie’s in Harlem when he brought Les Paul up to see the innovative guitarist and ended up hanging with Les, Wes, George Benson and Grant Green. “At the end of the night we just stood together outside the club on the corner of 133rd Street and 7th Avenue, then walked over to Wells’ waffle and fried chicken house, had breakfast and talked guitar talk until the sun came up.”

Martino was in classic form during his set, drawing liberally from his last Blue Note release, Remember: A Tribute To Wes Montgomery. With drummer Allyn Scott Robinson and bassist David Ostrem providing the surging momentum on swingers like “Full House,” “Four On Six” and “Groove Yard,” Martino blew through the changes with razor-sharp facility and signature intervallic leaps while layering on plenty of Wes-type octaves along the way. Pianist Rick Germanson, a reliably swinging accompanist, also provided some soloistic sparks throughout the set, particularly on the uptempo burner “Earthlings” (from Martino’s 2003 Blue Note recording, Think Tank). The guitarist’s inherent bluesiness came to the fore on “Mac Tough,” his earthy tribute to B3 maven and former boss Jack McDuff. He also played with great lyricism and sensitivity on the luscious Milt Jackson ballad “Heartstrings” (which he dedicated to Wes’ widow, Serene) and conveyed a remarkable depth of feeling with his burnished tone and nuanced touch on a relaxed rendition of the gorgeous Bill Evans-Miles Davis ballad “Blue In Green.”

Martino’s exhilarating set was his first appearance in Cape May in 24 years. It was back in 1983 that he began to re-emerge after surgery for a near-fatal brain aneurysm. One of his first appearances on the comeback trail was at the Old Shire in Cape May, where he performed under his real name (Pat Azzara). By 1987, he was officially back on the scene, having made a live recording (The Return, Muse) at Fat Tuesday’s with bassist Steve LaSpina and drummer Joey Baron. “It took me 17 years to relearn the instrument and find a place to reside within it as I had before,” he told the Convention Hall audience. And now, after a long uphill battle, the great guitarist is definitely back on top of his game.

At the Marquis de Lafayette’s Victorian Gardens, guitarist Royce Campbell was deep into a Wes bag with swinging octaves and fluid single note lines in the service of the Everett Greene Quintet, fronted by the classy and charismatic D.C.-based jazz singer whose rich bass-baritone voice sounds like a cross between Billy Eckstine and Paul Robeson. A natural-born swinger, Greene’s ebullient renditions of pop chestnuts like “Let There Be Love” and Rodgers and Hart’s “Where Or When” had the audience clapping along and having a ball. He even took an overblown pop tune like Carly Simon’s “Nobody Does It Better” and swung it into bad health with a hip shuffle treatment, then testified with bluesy authority on “Willow Weep For Me” and melted the audience with a moving reading of “My Funny Valentine.” Between songs, Greene revealed to the intimate nightclub crowd that his first professional gig, at the Missile Room in his hometown of Indianapolis, was with none other than Wes Montgomery. The New Jersey-based Campbell, whose extensive resume includes 19 years of road work with Henry Mancini as well as tours with Ray Brown, Mel Tormé, Cleo Laine and Sarah Vaughan, also stepped out on Montgomery’s “Naptown Blues,” further distinguishing himself as a creative improviser and talent deserving of wider recognition.

Two other noteworthy New Jersey guitarists-Bob DeVos and Teddy Royal-evoked the spirit of Wes in separate sets. At the Cafe Promenade in the Montreal Inn, DeVos shared the front line with the bold-toned Philly tenor sax legend Bootsie Barnes, backed by seasoned drummer Vince Ector and the exciting Hammond B3 organ ace Kyle Kohler, who ranks with the best of the new breed of B3 players that includes Sam Yahel, Gary Versace, Jared Gold, Sam Barsh, Brian Charette and Adam Scone. Together they ran down such Wes anthems as “Road Song” and “S.K.J.” On a mellow rendering of the Thelonious Monk classic, “‘Round Midnight,” DeVos demonstrated some harmonically rich chordal work behind Barnes’ pungent tones. And the guitarist burned a blue streak on Wes’ “Full House.” Royal was the big discovery of this Wes-related festival. As Fats Domino’s guitarist for the past 30 years, he has traveled the world but kept a low profile. In his rare appearance as a leader at the Boiler Room in Congress Hall, Royal demonstrated the most authentic Wes technique of the bunch, deftly spinning fluid single-note lines and smooth octaves with his thumb rather than with a pick. Backed by Dan Kostelnik on organ, Tony Day on drums and Freddy B on percussion, Royal made a lasting impression on an ultra-blue rendition of “Willow Weep For Me,” an energized “Four On Six” and his swinging set-closer, “Our Love Is Here To Stay.”

Some non-Wes highlights at this spring edition of the Cape May Festival included a rousing set of relaxed Basie-styled fare by 80-year-old tenor sax legend Buck Hill and a bristling set of powerful postbop originals by trumpeter Terence Blanchard’s Sextet, featuring the flexible rhythm tandem of drummer Kendrick Scott and bassist Derrick Hodge along with tenor sax sensation Brice Winston and young Cuban pianist Fabion Almazan. A highpoint of their set was an introspective reading of the hauntingly beautiful ballad “I Thought About You,” which segued into Blanchard’s emotive trumpet coda of “Amazing Grace.” The most modern envelope pushing at the festival was turned in by Philly bassist and former Jazz Messenger Charles Fambrough, who assembled a sextet of killers-tenor saxophonist Mark Shim, trumpeter Maurice Brown, pianist George Colligan, trombonist Clifford Adams and drumming great Mike Clark-for an exhilarating set that drew from McCoy Tyner, John Coltrane and Art Blakey for both its repertoire and inspiration. The underrated Shim distinguished himself as a world-class improviser, Brown thrilled the packed house at the Grand Hotel Ballroom with his effortless high-note virtuosity, and Colligan drew rowdy applause for his energized, McCoy-inspired piano solos. Fambrough anchored it all with humungous tones and insistent walking grooves.

The weather for this spring fling in Cape May was more than favorable with sunny skies and temperatures getting up into the 80s by Sunday afternoon, causing festivalgoers to flock to the beach in droves. If Carol and Woody are lucky, the weather for the 28th edition of the festival, scheduled for Nov. 9-11, will be just as inviting.